Very often on this site I write about music that carries me places. Not physically, of course, but mentally and spiritually. I like being lifted from my intellectual plane and transported somewhere else. It’s an escape, an adventure, an exploration. Typically, music that can do that for me and to me is what speaks to me most over the long run.

Chicago-based experimentalists Locrian always have been one of those bands that guaranteed me a trip somewhere different. Through their previous three full-lengths (“The Crystal World” being a personal favorite) and their many, many other mini-releases, this group always has been one to challenge the senses. Their music can’t just be “gotten” by someone sitting with them for the first time, especially if that listener has more of a mainstream bend. No, this band must be absorbed and understood to achieve complete connection. I hope that doesn’t sound hifalutin, because I don’t mean to be all “oh, you just won’t get it” dismissive. I hate those kinds of folks. But you need to get to know Locrian, almost like you have to warm up to a new friend, but once you do, you’ll accept them forever.

Of course, even if you think you know Locrian intimately, they always keep you guessing. That’s another thing I treasure about the band – André Foisy, Terence Hanum, Steven Hess — because I never quite know what I’m going to get from the group’s music. Their latest full-length “The Clearing,” their fourth overall, is no exception, and while it’s incredibly spacious, challengingly psychedelic, and sometimes abrasive, it’s nothing like their previous work, even if you could use those same descriptions to explain Locrian’s other work. That’s because often times adjectives and modifiers often aren’t enough to totally convey a piece of work’s structure and only listening and spending time with it really can give you the full picture. That’s “The Clearing” for you. 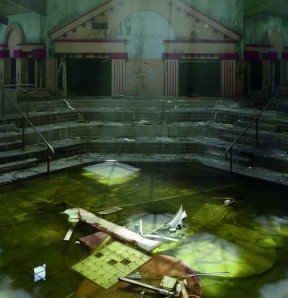 There really isn’t a true classification for Locrian’s music, and that’s OK because we spend too much time building walls and perimeters around bands as it is. They’ve always delved in ambiance, doom, black metal, drone and plenty of other styles but never have been solely devoted to one. That’s still the case with “The Clearing,” though the record is less heavy and suffocating than some of their previous records. It’s probably their least black metal and doom album so far, not that some of those traits don’t lie beneath the surface. The band notes they tried to move beyond the more metallic influences in their music and take their journeys beyond into progressive, gazey and industrial terrain. And they do that loosely, because there aren’t many sequences here where you’ll point directly at a passage and cite that as the reference point to Yes’ “Relayer” album or Throbbing Gristle, both of which are cited on their Bandcamp page. But if you really think about it while listening, you’ll hear the connections. I hear more of Burzum’s “Aske” album, another source material that gets a nod, but not explicitly. All of these inspirations appear in a more, um, roundabout fashion.

We get started with “Chalk Point,” a song that comes together slowly on the back of ambient beams and slowly dripping piano before it meets a steady melody line and some chant-like vocals that blend into the background. “Augury in the Evaporating Tower” is the thorniest of the four-track collection, opening with a pocket of space drone that eventually catches up with manic, isolated shrieking, and a sped-up tone that threatens to run through a brick wall. But instead it calms and fizzles out in a pool of static. “Corpolite” has a Pink Floyd-like psychedelic acoustic backing and a gentle, mid-tempo pace that permits plenty of on-your-back star-gazing. The epic title track closes the collection, laying a foundation in B-movie, sci-fi clouds, a steady, pulsating spine of synthesizers, simmering hisses, and machine-style pumping. It envelops you and claims you, almost like it’s dripping a calming solution into your veins, allowing you to forget what ails you outside of your everyday tribulations so you can get some clarity before returning to reality. At least that’s how it strikes me.

Locrian don’t seem to be able to fail me, and I appreciate that greatly. Each release has something new to say, and in a world where so many bands just want to make the same statement in order for a reliable number of units moved, it’s always refreshing to discover and indulge in a band that isn’t satisfied with a norm. Who knows where Locrian will go in the future, but I’ll certainly be along for the ride.

For more on the band, go here: http://locrian.bandcamp.com/

For more on the label, go here: http://fandeathrecords.com/