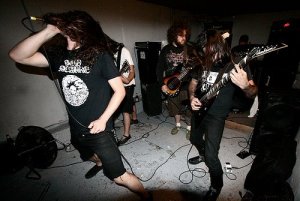 Winter is coming, or so a book series I can’t seem to finish keeps telling me. But it’s also the case in real life that, quite soon, we here in the States are going to be dealing with snow, ice, bad road conditions, and, as a result of all of that, moronic assholes. The rite of the season, I guess.

It’s already getting pretty damn chilly around here (that is when it isn’t 70 degrees for 12 hours), and the coats and gloves are out in full force. The warmth of summer has passed us by, and it’s time for hibernation again. Those days always get me heading back to the classic days of black metal’s first and second waves. Those were frosty times, and as a result, they spawned bands that knew how to convey frigidity both of emotion and temperature. Listen to some of those early ’90s Nordic bands and tell me you can’t see your breath in front of your face as you battle along with their songs. It’s a state of mind as much as is it a climate condition. 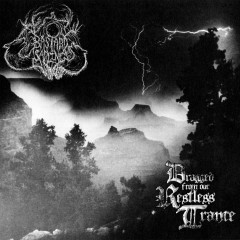 Richmond, Va., is pretty damn far away from the Scandinavian forests, though folks living there aren’t exactly shielded form wintry conditions when they blow into town, yet Bastard Sapling have that same aura that freezes you to the core. Majestic guitar work, infernal thrashing, lonesome, forestal howls, and a blizzard of violence is what greets you on the band’s new record “Dragged From Our Restless Trance,” and if you’re way into the sounds of old Darkthrone, Immortal, and Bathory, you’ll be pretty excited to welcome this collection into your home as well. To be clear, these guys aren’t trying to recreate a scene of which they weren’t a part, but instead they have a grasp on true, ugly, classic back metal that’s ugly around the edges, unrefined, and bloodthirsty at heart.

Bastard Sapling have only been around barely half a decade now, and following a demo and 2010 EP, their first full-length finally has arrived by way of Forcefield Records. The band — vocalist Mike Paparo, guitarists Drew Goldie and Steven Russell, bassist Trey Dalton, and drummer Elway (the only member who is not of or formerly of Inter Arma) have been blowing doors down live and turning heads with break-neck velocity since the word’s gotten out about their dark majesty. This debut is a four-song record that runs about 40 minutes, so you’re in for some epics, but as noted, you’ll find classic-era ferocity most black metal these days completely forget to add to the mix, making the trip through this album exciting and punishing.

“Prophecy Born From Dismal Terrain” rips the lid off the album with a furious drum assault that reminds me a lot of the work on Nachtmystium’s “Instinct: Decay.” It’s aggressive and spirited, giving you a stiff punch in the chest, robbing you of your wind. Actually, the drumming on this song is its highlight, giving you a glimpse into Elway’s abilities. Always thought he was a hell of a quarterback, too. “Cold Winds Howled Across Desolation” is nearly 13 minutes long, with windy riffing, creaky vocals, and a measured pace that then blows apart and goes into full gallop. The song is chaotic for sure, but they pace themselves very well, making the most of the track’s challenging running time.

“The Apex of Suffering” is the surprise of the record, with a more chilled-out melody yet one that still manages to be ominous. Once the track goes aggressive, it heads more into the death metal realm than black metal, especially with the vocals, and there even are some power metal-flavored guitar lines toward the end of the song that dip just a bit into bombast. Nice touch. The record ends with “Beyond The Void of Life,” which runs 13:42 and takes a little while to get going. That’s not a bad thing. The guys set the stage in a calculated manner, with building clean guitars, bubbling noise, and a strange atmosphere before it has a complete meltdown. Paparo’s gurgly growls and shrieks erupt, but even when the band is at its most savage, they still lift you up with a daring melody that’ll make you want to take a late night run through the woods.

Having new music like this makes the oncoming ice bullshit worth enduring, because it’s perfectly aligned with that time of year. Not much really lights my fire from the black metal world these days because so much of it sounds heartless and cheap, but Bastard Sapling are one of those bands that gives me hope. This is a promising debut album from a band that I will follow with great curiosity.

For more on the label, go here: http://www.forcefieldrecords.org/