Death, obviously, is a primary tenet of metal. It’s everywhere, from the artwork, to band names, to song titles, to merchandise. You cannot avoid the subject matter, and if it’s something that makes you feel uncomfortable or sick inside, heavy music might not be for you.

But there’s also the human aspect of death. It’s a real thing we all face, and our own mortality is something staring us in the face every day. Yeah, it might be rad to look at a Cannibal Corpse cover and chuckle at the graphic violence that unfolds, but that’s a cartoon. Actual loss is real, hurts, and can alter who we are. Muscle and Marrow, a duo that hails from Portland, dive right into that subject on their great, moving second album “Love.” Guitarist/vocalist Kira Clark recently went through the loss of a close family member, and that, in turn, heavily influenced the seven songs you hear on this record. As you can guess from the title, love also is a major topic, examining how we love one another, if we do at all, and what that means to our lives. Yeah, not the typical death aspects we get from most heavy bands, but these songs hit harder because they can, and did, happen, and it’s something we’ll all experience. 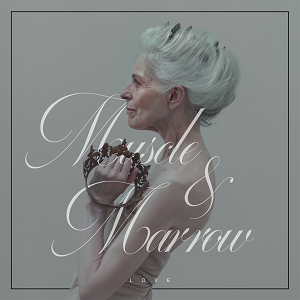 Muscle and Marrow fit into the outer perimeter of metal, but their sound falls more toward rock and noise elements. Clark’s expressive voice reminds me of a mix between Chelsea Wolfe and Shara Worden, and the music itself is edgy, thorny, sometimes anxiety-inducing, and always mentally pulsating, while musical partner Keith McGraw strengthens their sound with drums and sound work. These seven songs truly feel like they take you on an emotional journey, and mixed into the record are the topics of feminism and female archetypes (the incredible cover art conveys that nicely), and it’s a great step up from their stellar debut record “The Human Cry.” This is a record you’ll be hearing about all year long as more people discover it.

“My Fear” starts with guitar and synth tension, with the vocals floating over the mix and melting into anxious gasps. As the song heats up, the music flutters and the singing hits loops of, “Earth itself,” that swirl over and over and into your brain. “Black Hole” opens into eerie noises, with Clark leveling, “I feel stronger now when I’m alone.” The drums lead slowly, while the fuzz rises and bleeds, with the singing gripping you. Noisy power kicks in at the end, fading out into a groan. “Womb” has solemn, sorrowful melodies out front, with jazzier singing filling the room, only for doomy pounding to burst any serenity. The track continues to spread elegantly, with tightly wound drubbing setting the tone, and emotion poured heavily over the final moments. “The Drooling Mouth” plods along, with synth pulsating, and a doom-drenched, bloody melody slithering in. Keys roll over like a fog, with strange echoes, agitation poking, and Clark calling, “All I want is love.” The track is dressed with longing and pain, seeping toward its abrupt end.

“Sacs of Teeth” drips slowly, with guitars drizzled over top and more forceful vocals taking command, causing jarring jolts. The cut is chilling to the bone, always threatening to spill over into violence, with wild shrieks tearing you awake. “Such soft skin!” Clark wails, as choral chants swirl, and the track ends like air being ripped from the lungs. “Bereft Body” is arresting, with vocals nearing falsetto, and noise building the fever. The music is trance inducing, with the elements sounding as if they make a storm front, promising to soak the ground. Closer “Light” is the highlight, the piece to which the crescendo builds, as it starts softly with soulful vocals, only to edge up the volume. “Everyone I love is gone,” Clark laments, later countering with, “Hold back the light, it burns my eyes.” The track feels like an emotional bloodletting, but with that also serves a purpose of power, especially as the final moments hammer home the looped chant of, “Fear my power,” as blunt a threat as you could possibly face.

Muscle and Marrow really put themselves on the line with “Love,” a vulnerable, painful record that could help other people going through the struggles of loss and self-identification. These seven songs grab onto you and refuse to let go, making you confront the subject matter head on. It’s also a damn listenable collection of songs bound to climb into your head and heart and refuse to vacate.

For more on the band, go here: https://www.facebook.com/MuscleandMarrow/