Our existence isn’t meant to be easy, and trying to stay the course can be impossible to manage sometimes. Whether there is chaos in our lives or we’re looking tragedy in the eyes, managing hardships and pain can ask every ounce of us and drain us of our beings. Not everyone is capable of responding and staying strong, and the ones that do often come out changed on the other side.

Trying to take matters into our own hands to guide our journeys is a major theme of “Lore of the Lakes,” the magnificent debut record from Inexorum, a project initially envisioned as a solo endeavor for Carl Skildum (you know him from Antiverse and Threadbare, and he has played guitar in a live setting for Obsequiae), this album is a celebration of melodic riffs, a record that should cause your bloodstream to surge, whether you simply digest the songs or also tackle the subject matter. Joined by bassist and RIAA-certified-gold producer Matt Kirkwold, the duo unleashes a positively hellacious recording that drinks heavily from the early ’90s black metal streams but does not just regurgitate sounds. They are in homage, sure, but they deliver their own version of this sound, an explosive, rushing album that sounds like it will be considered a modern classic once it ages a bit. That sounds hyperbolic. Admittedly, yes, but there’s a feel in this music I can’t fully describe, and it makes me believe it’s the beginning of what will be a special band. 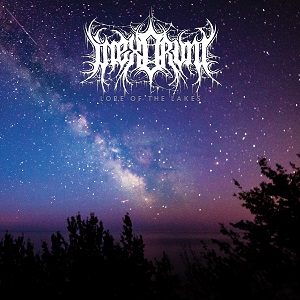 “Raging Hearts” is a blistering way to open the record as the riffs take hold right away, catapulting chaos and meeting up with fiery melody. “We forge our own way!” Skildum wails, all the while the music gallops triumphantly, with more razor-sharp riffs leading the way to the very end. “Let Pain Be Your Guide” has guitars knifing through muscle, with the leads surging, and the growled verses spraying cinders. “Will I ever be the same again?” Skildum wonders, surrounding that mystery with playing that feels full of Viking rage, reminding of an even heavier early version of Amon Amarth. The guitars are fluid, while the drums decimate, and in the midst of rage, Skildum howls, “Light the flame and hold it high,” ending the song on a defiant note.

“Years in Exile” runs a healthy 7:22, and it begins with a deluge of guitars and verses that are a little grislier than what preceded it. The track storms hard, giving off a classic metal edge along the way, and delivering another heaping helping of catchy riffs. Later, the drums thunder, twin guitar lines intertwine, and things spiral to its end. “To Omega” has a meaty start, with the guitars trudging ahead, and growls that go from harsh to cavernous within the same stretch. The music rises gloriously, making adrenaline burn, while vibrant melodies crash to the ground, and the song comes to a breathtaking end. The closing title cut is the longest song, clocking in at 8:46, and it allows an atmosphere to develop slowly, while waves lap the shore. The power then emerges, chugging and chewing, before the song ignites and hits full intensity. “From shore to shore, hear the voices of those who have gone before,” is a refrain Skildum repeats, each time with added emotion, as the music develops into a fiery storm. The final stretch finds the guitars setting up one final assault, the drums cracking the earth, and everything dissolving into a bed of acoustics that deliver a rustic, woodsy finish.

This first dose of triumph from Inexorum jolts the earth and makes seismic waves on debut record “Lore of the Lakes.” It’s an album that will thrill the hell out of those who dine hungrily on the riffs, as well as those who also find substance and relatable messages in the lyrical content. This is a fantastic record, one of the best debuts of the year, and we’re pretty sure we’ll still be enjoying this thing once that snows fall and our bootsteps crunch beneath us.

For more on the band, go here: https://www.facebook.com/inexorum/

For more on the label, go here: http://gileadmedia.net/