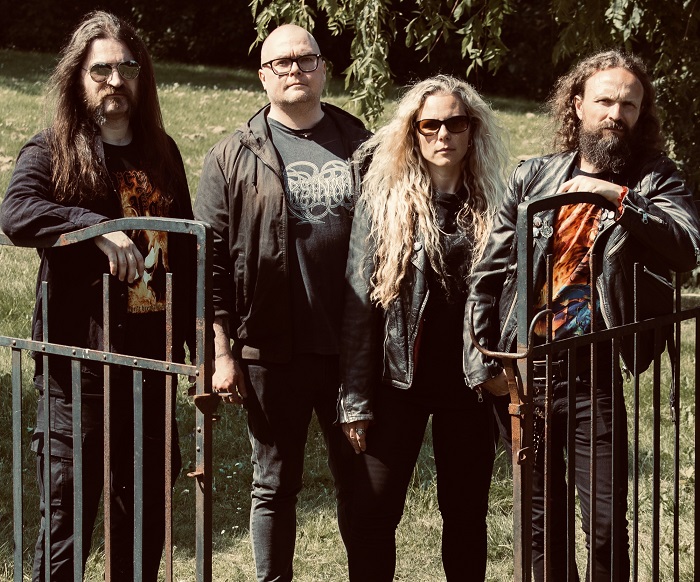 Time off is a good thing and can lead to recharging the batteries or just getting the desire back to do the very thing you stepped away from for a stretch. In fact, it’s probably a good thing that everyone should do now and again not just to get a breather but to gain some perspective on how to approach said activity and find ways to be even better at what you do.

Before their 2018 album “Evoked From Abysmal Sleep,” the 12th over record from Runemagick, we haven’t gotten a full-length from them in 11 years. This from a band that was insanely prolific during their early run, twice releasing two records within the same calendar, and putting out four albums between 2002 and 2003 alone. That’s not necessarily something that’s sustainable, and perhaps that’s why the band took a decade-long hiatus. Well, looks like they’re back to their old tricks and their 13th effort “Into Desolate Realms” is dropping on High Roller Records, and it’s a goddamn monster. The Swedish death/doom maulers also brought on “The Opening of Dead Gates” EP last month as well, so they’re back on their shit as the band—guitarist/vocalist Nicklas “Terror” Rudolfsson, guitarist Jonas Blom (who used to play drums), bassist Emma Rudolfsson, drummer Daniel Moilanen—hammers on this eight-track monster (some versions have the aforementioned EP tacked on) that keeps them humming and burning with an intensity only Runemagick can generate. 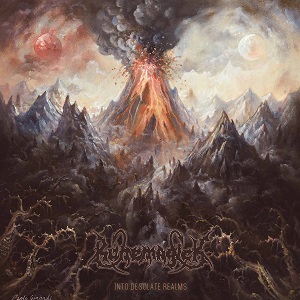 “Remnants of the Old” is a quick intro-style cut that sets fires burning, doom bells ringing, and the mood turning dour, heading into the title track that gets riffs moving toward hell. The growls land and lurch while the music boils, and the power continues to grow. The melodies spiral and sicken, wrapping their arms around your throat and squeezing the life from you. Rudolfsson’s Tom Warrior-style grunts bring a jolt of old-world nostalgia while mystical melodies trickle, drums clobber, and the pain spills into “The Opening of Dead Gates” where the growls crawl like a slug. The doom riffs create a thick blood bath that slowly spreads and sends pestilence in a stream, as ominous tones reverberate, and the leads continue “Sorceress Reburned” that starts morbidly as possible. The track takes its time sinking in its claws as a cosmic wash dashes over the guitars, while the soloing plays trick with the mind. Things stomp along while psychedelic warfare is waged, and strange melodies bring things to a mauling finish.

“Decay to Nothing” has guitars ripping out guts, while the music rumbles along, and monstrous growls make their presence known. Slow mauling and bluesy thrashing team up and bloody lips while Rudolfsson pokes, “You are nothing, and your soul will remain in nothing.” Guitars bleed generously while the ample torture increases and feeds into “In the Sign of the Dragon Star” that extends the massive horrors. The music seems to cut into bone before it kicks up and increases the intensity, creating a hellish doom pit before everything ends abruptly. Then the riffs return as soloing takes control, being charred with precision as an eerie finish leaves goosebumps. “Necromancer of the Red Sun” attacks from the gates and powders rock, as cool growls sink in its grip, and the heavy grip is added to the pressure points. Chanted growls and furious playing then spill over like lava and burn a path right toward you. “After the Sepulchral Lava” ends the record with guitars tunneling into hell with scary keys buzzing in your brain. Things gets bizarre and tricky as acoustics wash in, the main levels increase, and noise swallows the track whole to soak in its corrosive belly juices.

It’s clear that decade-long breather served Runemagick brilliantly, as their second life has been fruitful and wholly destructive toward our hearing. “Into Desolate Realms” is a smasher, a record that fans the flames they’ve sparked since their return and keeps them raging with emotional fuel. This is a band with a refilled tank and an agenda to psychologically maim, which they do with great power nearly 30 years after they drew their first droplets of blood.

For more on the band, go here: https://www.facebook.com/runemagick

For more on the label, go here: https://www.hrrecords.de