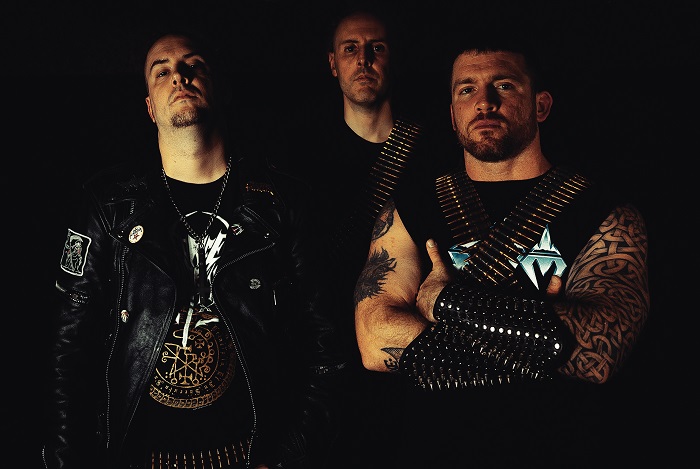 We’re at a point where heavy metal never has been more intelligent. Though some pockets never have been denser. Anyway, there’s a lot of heady material out there that gets inside you and makes you think about things be it the state of the earth, our unraveling society, or even just our place on this planet or the vast universe as a whole.

Sometimes it’s OK to just be bludgeoned to death as Houston-based mauled Oath of Cruelty seem to have in mind on their spastic, rowdy debut record “Summary Execution at Dawn.” This isn’t to suggest the music is lunkheaded or that they lack intelligence, because the way these songs are structured and assault you suggests anything but that case. Also, the songs titles are great. But if you’re seeking for a record to challenge your knowledge or philosophical standings, you’re going to want to look elsewhere. If you want 33 minutes of absolutely sadistic insanity and clobbering death metal-driven thrash that’ll beat the fuck out of you, then look no further than this trio of heathens—guitarist/vocalist Dave Callier, guitarist Danny Hiller, drummer Matt Heffner. 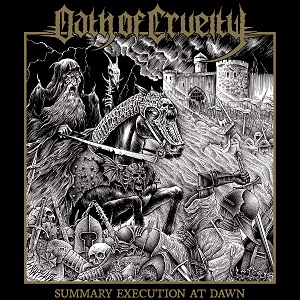 “Pounding Hooves of Shrapnel” gets things started with a furious pace, guitars going off, and growls that feel like they’re trying to rub cinders into your eyes. The track stampedes from there as the leads just melt, rampaging toward “Stabbing Forth With Invincible Damnation” that’s equally as lava-filled and bloodthirsty. The vocals split throats while the speed makes things difficult for you to keep up, finishing the track off with blazing soloing and hefty thrashing. “Through Alchemy and Killing” has riffs attacking right from the start, as the pace delivers a slashing attack you can’t sidestep. The drumming is a double-kick assault before soloing ignites, and the gruff vocals send shrapnel into the hellish power surge. “Pathogenic Winds of Swarm” unleashes madness as the vocals breathe fire, following by playing that seeks to decimate its enemies. Wills are driven into the ground, and submission is the only way out as the band sets fire to whatever stands in front of it.

“Into the Chamber of Death” delivers heavy blows as the leads catch fire, and the growls punish over a massive chorus. Riffs twist into infernal insanity, leaving a trail of blood and broken bones behind it. “At the Tyrant’s Behest” has horses galloping on their way to battle, and when the song opens up, it’s clear you’re in the midst of violence and bloodshed. Raspy growls spit venom while the guitar work gets lathered up into a frenzy, and cool leads and vocal drone bring things to a weird conclusion. “Victory Rites of Exsanguination” bursts as echo settles in before the band starts to open fire wholly. It’s a break-neck pace that delivers the bulk of the damage while the guitars char a path, leading to a smoke-filled ending. “Denied Birth (Merciless)” brings with it menacing guitars and a tempo that chews the ground and vomits it back at you. The drums destroy, fueling the clobbering pace, while the title of the song is wailed repeatedly before the life is sucked away. The title track draws the album to a close as it charges up, brings vile growls, and then the track loses its mind. Fists fly as the growls explode from Callier’s mouth, while monstrous destruction follows, and the track comes to a suffocating end.

It may have taken nearly a decade for Oath of Cruelty to deliver its debut full-length, but shit takes time, and there should be no complaints once people finally get to hear “Summary Execution at Dawn.” Every bit of this thing delivers violent intent and thrashy beatings that’ll leave your flesh raw after you’re done wrestling with these nine tracks. This is metal that is here to be an agitating force, with zero concern for your mental or physical well-being, and sometimes that’s exactly what we need.

For more on the band, go here: https://www.facebook.com/oathofcruelty