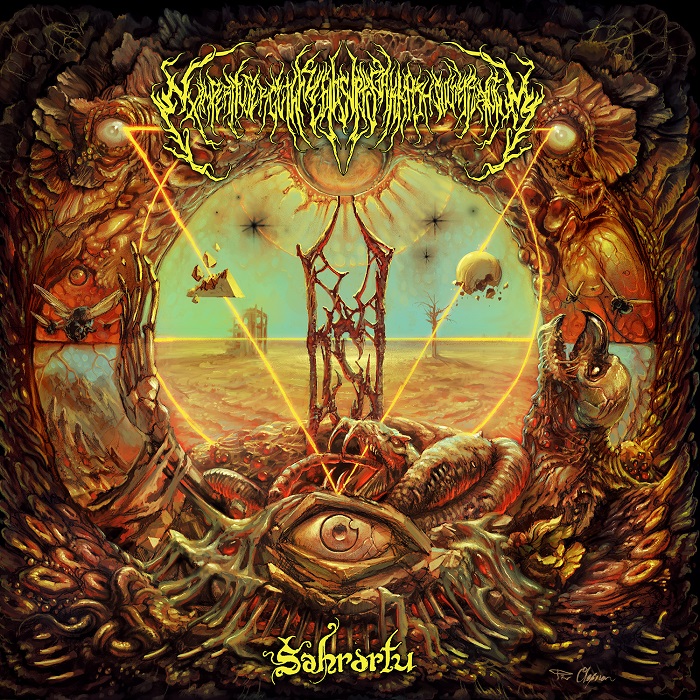 We’re very into strangeness here, as long as it makes sense in the confines of the music and isn’t just there to cover up for a lack of substance. Any time metal can be bizarre and feel like it’s coming from a strange cosmic entity instead of an earthly being can be really exhilarating because it destroys expectations and helps open the gates to other experimentations.

Belarusian death unit Eximperitus (by the way, that’s the shortened version of their full name Eximperituserqethhzebibšiptugakkathšulweliarzaxułum) dig back into the works of the ancient gods and magic that has lurked behind the scenes for ages on their new record “Šahrartu.” That title is a million times shorter than what they named their debut 2016 full-length, but the idea remains relatively the same. The term “technical death metal” is affixed to this band by some folks, but this is full of alien creativity, punishing confusion, and yes, very well played and executed death that easily can capture your imagination if you’re along for the ride. It’s not antiseptic, uncreative noodle shit at all. The band—there is no official lineup that I can find, and no band photos were supplied with the promo—keeps things dark, strange, and terrifying in a mind-erasing way that leaves you reeling once the music—six tracks at an economical 37 minutes—ends.

The title track starts the record instantly heating up as guitars rise, the atmosphere thickens, and the instrumental piece burns its way toward “Utpāda” that starts in a calculated manner before tearing into a mind warp. Sinewy hell and thick growls erupt as things get shifty and punchy, with creaky vocals sticking into your side. The track gets meatier and heavier as the leads snake through smoke, the growls lurch, and everything winds up in a pile of ash. “Tahâdu” rips open and just slays, as fast and smudging guitars set fire, and the growls gurgle amid thickening humidity. Growls pile up as the guitars get racing again, bringing brutality and power, churning into hell as everything melts into strangeness.

“Anhûtu” leads in the guitars charging, growls opening veins, and a monstrously weighty approach leaves you with bruising. A strange bit of electronic glitching took me out of the thing for a moment, and man, if bands could quit doing that already, but then the mauling and musical stabbing returns, smothering hell makes its presence known, and the track ends in a mysterious pocket of sound. “Inqirad” is the longest track here, running 10:05 and beginning in psychedelic waters. Growls then crush as violence explodes, and sanity is torn to shreds. The playing settles into the mist and then rounds back to deliver morbidity and growls gurgling blood. The playing brings with it visions of doomy horrors, trudging into echoes, and finally submitting to the heat. “Riqûtu” is the closing instrumental cut that brings strange impulses, playing dripping into dreams, and a sense that chills your soul.

Eximperitus bring bizarre, penetrating magic on “Šahrartu,” a record that can easily be labeled as technically proficient death metal, but there’s so much more going on that it really lies beyond that simple descriptor. The band’s utterly bizarre tidings on this record can dig deep inside of you and cause you to see strange things in your dreams, even after you think you’ve shed the music after it’s over. It doesn’t leave you alone, and you likely will be just fine with succumbing to such occult-friendly incantations that turn your mind to fire.

For more on the band, go here: https://www.facebook.com/eximperitus.official

For more on the label, go here: http://www.willowtip.com/home.aspx