It’s been a while since we visited the Meat and Mead parts of Meat Mead Metal, and there’s sort of a good reason for that.

I recently had a medication I was on switched to something else, and my doctor felt that alcohol consumption, at least on a regular basis, wasn’t the best thing in the world for me in order to get this new medicine working. So now drinking has to be a more occasional sort of thing, which sucks considering I really like beer, but it’s not the end of the world. Um, bad choice of words? Actually, we’ll get to that in a second.

Last weekend, I decided to have a couple of beers (yes, I sadly have to chase it with plenty of water and food for now, but that’s smart anyway) so that I could get back on track just a bit on that element of the site. And, with this week being American Craft Brew Week, I would be remiss if I did not tackle some element of beer imbibing, would I not? What am I, a savage? So I grabbed a couple of cold ones from the local hot dog shop D’s Six Pakz and Dogz (always reliable and awesome, terrible spelling aside) and headed for the comforts of home, the iPod and the videogames. And the wife.

First up was Atwater Brewery’s Black Imperial Stout. Weirdly, if you go to the brewery’s web site, this beer is not even listed yet, so it’s still pretty new. The girl who rang up my beers told me the Black Imperial supposedly is their Vanilla Java Porter ramped up to be more of a Russian-style stout (the ABV said 11 percent, but it seemed more like 4 percent), and she could not have been more on the money. It really had that smoky vanilla taste that I always enjoyed, but it’s much darker and bitter. It also outlasts its welcome, weirdly. Keep in mind, I had not had a beer in weeks, so I was ready for these. And this one kind of let me down. The potency is not there for a beer that claims 11 ABV, and I seriously dispute that one. I felt absolutely nothing when I drank this thing, and typically I’m a bit of a lightweight. Not sure I’d get this one again. I’d be interested to taste it in draught form, but I’d have to travel in order to do that.

To check out more on Atwater Brewery, go here: http://www.atwaterbeer.com/

The other bottle I grabbed is an old favorite, that being Dogfish Head’s Raison D’Etre, which I had last summer

when we were in Rehoboth Beach for our honeymoon. Yes, we went to Rehoboth Beach for our honeymoon. It was awesome. The beer tastes quite hoppy to me, and I’m ordinarily not a big fan of the hops, but it’s certainly not overwhelming. The brewery’s web site describes the beer this way: a deep, mahogany Belgian-style brown ale brewed with beet sugar, raisins, and Belgian-style yeast. So that should give you a better idea than my rudimentary description. It also feels more potent than the Atwater entry, and has a bit of a complex taste to it. I’ve had in on draught, and I think I prefer it that way, but the bottle’s quite good too. This one’s fairly easy to track down, and it went pretty well with the Cajun-and-garlic pork roast we made last weekend. By the way, if you’re ever in Rehoboth, definitely stop by their brew house for lunch or dinner.

I’m hoping to have some brews next weekend, as it our anniversary, but again, have to do it responsibly with a sensible pace. Oh well. There are people without homes, and here I am whining about when I can drink and how I have to drink it. Again, it’s not the end of the world. Or is it?

I’m sure by now you’ve heard of this Rapture prediction, and that it’s supposed to go down tomorrow. To me, it’s another cult grabbing headlines, sickening people’s minds and draining them of their life savings because some crazy man has decided to take a few passages from the Bible and determine they can be calculated to determine when the end will take place. This guy already wrote a book years ago that predicted this very same event in 1994, though now he says his calculations were wrong. Hmm. Wonder what his next excuse will be. I’ll withhold further judgment because that’s not what this site is for, but it sickens and infuriates me that people like this prey on people’s fears and faith and twist their minds in this manner. If this thing doesn’t come to pass (and I am pretty sure we’re going to be up and running, with all of you back and reading here at MMM next week), there’s going to be some explaining to do. 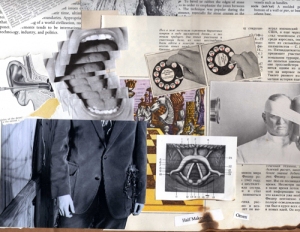 The movement also hasn’t left the metal world unscathed. Half-Makeshift, the Maryland-based project that consists of Nathan Michael, ceased operations a couple years ago because he believes in this notion and wanted to spend his time devoted to more worthy causes than his ambient/post-rock-style music that always was a really enthralling experience. His last effort was “Omen,” released by Profound Lore, and it was a very fitting last testament from an artist who truly believes that, come tomorrow, he no longer will be a member of this earth. You can read more about the record at the link below, which fleshes it out better than I could. I know I’m going to revisit this record either tonight or tomorrow night (after, as I feel, nothing happens), and I’m curious as to what my reaction will be. I also wonder, if the events predicted tomorrow do not go down, if Michael will one day come back to Half Makeshift and, if so, what the output will be like. I’m very curious.

For more on Half Makeshift, go here: http://www.myspace.com/halfmakeshift

Well, hope to see you all next week. God willing, we’ll be back with some killer stuff, such as Vastum, Autopsy, U.S. Christmas, Altar of Plagues and a ton more. Oh, and look out for some Infestus later.