Guess who's got their eyes on the Water Towers.

It’s been an excellent year for doom metal and its various subgenres.

Off the top of my head, I can think of Batillus, Indian, Gates of Slumber, Blood Ceremony, Electric Wizard (at least domestically), and the amazing comeback from death cheaters Pentagram. So what’s a couple more albums in the cauldron, right? Luckily for those out there who feed off doom and the many offshoots that have kept things dark and grimy this year, MeteorCity Records has a two new bands to enter into the mix: Sweden’s interestingly named The New Keepers of the Water Towers and Boston’s own Olde Growth. Each band uses doom as its base, but they don’t really follow the same path. Chances are both albums will please largely the same audience, but there will be offshoots of folks who like one band’s style more than the other.

MeteorCity is an offshoot of All That Is Heavy, a longtime music distributor for bands that lean toward the stoner and doom styles of music. Ever since its formation, MeteorCity has brought us quality bands similar to what All That Is Heavy sells, such as Black Pyramid, Elder, Farflung, and Valkyrie (the band includes members of Baroness), as well as widely known veterans including The Atomic Bitchwax, Nebula, The Hidden Hand and The Obsessed, among others. Basically, if you enjoy your music in a cloud of smoke, MeteorCity is a pretty good destination for you, because they have a generous bit of material that’ll help you along that, I guess, journey.

First up are The New Keepers of the Water Towers, a band that labels itself as “beast metal” and pretty much unleashes a fury that’s faithful to that description. Almost immediately upon hearing their 29-minute album “The Calydonian Hunt,” I thought of Baroness and Mastodon. In fact, the song “Return of Ziz” sounds so much like Relapse-era Mastodon, it’s quite chilling. It’s really the only song that sounds like straight-up imitation, though I don’t know if that was their intention. Based on the rest of the album, it probably is just how it came together, because you really can’t say the same thing about the other eight cuts. In fact, “Abyssal Lord” actually made me think of a more melodic High on Fire when first hearing it, and the more I’ve visited that track, it presents more of its own DNA and less of any of its influences. The title cut has more of a Southern rock boogie approach, with frontman Rasmus Booberg (best name ever) dialing back the grunts and going with more of a drawled clean vocal approach. “Arise, the Serpent” has something of a classic metal finish that gets heavier and grittier as it goes; while “The Sword in the Stone” is the most indicative of their stoner metal proclivities, as it ends the record on a satisfying note. I wasn’t sure this record was going to stick with me, but the more I’ve listened, the more I’ve been hooked into the thing. Also, if you’re one of those whose days are filled with classic rock radio, ypu might find some value in this record. As long as you can handle the grit.

For more on the band, go here: http://www.myspace.com/nkotw 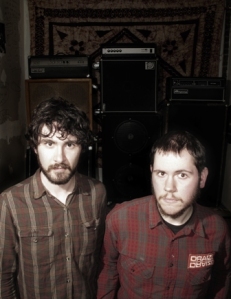 Boston bruisers Olde Growth have a bit more of a hardcore feel (vocally, that is) mixed into their style, though funny enough, it’s the longer of the two records (it runs about 45 minutes). If I have to draw comparisons, I’d say Olde Growth trudges along the same lines as YOB and Electric Wizard. For their moments of groove, think Kyuss and early Queens of the Stone Age. Olde Growth’s songs are longer, more mesmerizing, and muddily heavy. The thick pummeling is obvious, even though there are no actual guitars on the record. In fact, I didn’t even realize that until after I heard the record the first time. Vocalist Stephen LoVerme only wails away on his bass, yet it’s more than enough to hammer home these smashers. It also helps that drummer Ryan Berry delivers total cannon shots, making this slab even more sinister.

They open up with a blast with the ultra-thick stoner assault of “The Grand Illusion,” that has a bit of a ’70s rock feel to it as well. “Life

in the Present” bleeds ever so slowly, with LoVerme sounding more like a barker on a DIY matinee than a dude conjuring up evil spirits, especially when he’s howling a sobering line such as, “Your own mortality will set you free.” Sequoia” is much in the same vein, as they pay homage to the forest giants, and epic closer “Awake” rubs the gamut of all their sounds, making it sound like an Olde Growth best-of track. It’s damn effective. But the highlight is the three-part suite “Cry of the Nazgul/The Second Darkness/The Black Gate,” which sprawls over nearly 10 minutes of space and changes its face with as each tale is being told. In one piece, you’ve got your Tolkien references, your Armageddon, and your battlefield bloodshed, so who could possibly walk away disappointed?

For more on the band, go here: http://www.myspace.com/oldegrowthboston

The New Keepers of the Water Towers and Olde Growth are two of MeteorCity’s best new finds in some time. In fact, along with Black Pyramid, they’re now my favorite groups on their entire roster. Both albums please all of my doom needs, from filth, to good times, to doomsday premonitions, to outright savagery. If I had to choose one over the other, I’d go with Olde Growth, but surely there will be many who lean toward New Keepers. It should make for a fun debate and, in the end, we all win.

To check out the wares offered by All That Is Heavy, go here: http://www.allthatisheavy.com/