I’ve always considered a label such as Deathwish Inc. or Bridge Nine the go-to stop for what’s interesting in the world of hardcore-laced metal, but now it appears they have some stiff competition from the likes of … Southern Lord?

Yes, the same Southern Lord that brought you psychedelic, doom, black metal and drone goodness from the likes of Earth, Sunn 0))), Boris, Pelican, Wolves in the Throne Room and Eagle Twin. As of late, their focus seems to have shifted away from that focus more toward the hardcore world, and the list of bands they’ve chosen to release is pretty rock solid: Black Breath, Trap Them, Summon the Crows, Nails, The Secret, Masakari, Lebanon, Misantropic. While all of those bands draw from hardcore, they all sound different and have their own, personal approaches to the sound, so it’s not like they’re releasing the same style of band over and over again. Just a few weeks ago, the Lord exposed three bands  – Drainland, Acephalix, Alpinist – via their underground series to give more exposure to music that previously had not had such wide release. These are three more bands that have a hardcore base that, again, do not sound anything like each other and really deserved the wider recognition. Pretty soon, you’ll be able to get the debut from All Pigs Must Die and a limited copy of “Remnants,” the debut from Greek crushers Sarabante. So the floodgates certainly have not closed.

If you’re excited and already wondering how you’re going to fund all of these new additions to your collection, there are three more albums up for grabs – in this case, CD versions of previous vinyl-only efforts — that are freshly packaged on the shelves of your local record stores. If you still have those where you live. We, in Pittsburgh, are lucky to have a handful of outlets, so at least we can brag about that. People who have been into Southern Lord’s hardcore revival should find something of interest in these three albums, and which one you like the most is sure to depend on your tastes. Immediately below, I’ll post a link to Southern Lord’s web shop, where you can grab all of these (including a package where you can get all three for a pretty good price). After the individual write-ups, I’ll give you yet another link to where you can find these pieces at Blue Collar Distro.

If you want to buy these from Southern Lord, go here: http://www.southernlord.com/store.php

My personal favorite of these three releases comes from Seven Sisters of Sleep, a Southern California-based band that is made up of former members of groups such as Tafkata and The Arm and Sword of the Bastard God. Their self-titled debut, originally released by A389 Records, is sludgy and punishing, often with thick sheets of feedback raining down upon you. There’s also something of a stoner vibe in spots to this band, which you feel in full effect on cuts such as “Passed Out Standing” and “Swamp.”

Perhaps the stoner vibes should not be such a big surprise considering the motto that’s emblazoned on the back of one of their T-shirts: Tune Low, Get High. That pretty much gives you a good idea of what to expect. The music is brutal and muddy, their sound is drenched with noise and crushing thrashing, and the album’s pretty damn short at 20 minutes. Yet it feels like it’s timed just right, from the opening strains of “Monasteries,” that builds slowly before pummeling you, to “Tide Is Rising,” which has a doomy pall over it, to “Follow the Serpent,” a cut that would make an ideal show opening assault. This is one of my favorite of all of Southern Lord’s hardcore-minded releases (right up there with Black Breath), and if I had to pick only one of these three to purchase physically, this would be it no doubt. Plus they’re merch is really awesome.

For more on the band, go here: http://www.sevensistersofsleep.com/

Germany’s Planks are more atmospheric and stomp along the lines of Neurosis, Morne and Tombs (with whom they shared a 2008 split release), with hints of doom and black metal as well. This disc combines two of the band’s vinyl efforts – “The Darkest of Grays” and “Solicit to Fall” – that both were recorded in the same session. You certainly can sense that about these two efforts, as they have a similar feeling, but don’t mistake that as meaning there’s any redundancy. This 58-minute collection is fiery and passionate, often quite melodic, and indicative of a band that could have a scary impressive future ahead of it.

“The Darkest of Grays” (their second full-length) actually dropped last October, and the 12 cuts feature an eerie spoken-word intro and 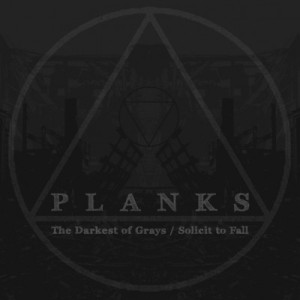 three propulsive instrumentals among them. “Sacred and Secret” has sort of an Armageddon feel to it, and considering it’s the second cut on here, it’s no doubt they planned to drop the menace early. “No Solid Grounds” has a clean, reflective introduction before it just melts your chest off, and “Fallen Empires Are Ruling” has a thick, post-metal ambiance, and the bottom just drops out of the thing, leaving you feeling hopeless and alone. “Solicit,” an EP that was released early this year, is but four songs long, but its power is undeniable. “Into the Nothingness Within” is charging and heavy, with gutturally deep growls, while closer “It Just Can’t (l.s.f.d.)” is a punk-flavored, agonizing break-up tune that insists shit ain’t going to be OK after all. I never understood why this band hasn’t gotten more exposure, but maybe this release will change that.

For more on the band, go here: http://www.myspace.com/walkingonplanks

To buy “The Darkest of Grays/Solicit to Fall,” go here: http://www.bluecollardistro.com/southernlord/product_info.php?products_id=5518&cPath=956_958&store=

Southern California’s Xibalba (Mayan for “place of fear”) is the truest of the three to traditional hardcore, and many times they make me think of the tough-guy-style bands from NYC and Orange County. Yet all the while, they have a sense of old-school death metal to their sound, so there’s certainly that crossover factor that could allow them to do both metal and hardcore shows without anyone thinking they’re out of place. More to the point, perhaps, is if you’re more into hardcore but also can get with Eyehategod, Crowbar and Obituary, this may be of serious value to you.

The band is muddy and heavy as hell, which I know may seem redundant to say on a metal site, but hopefully you get what I mean. This feels like cement trucks dropping, it’s that heavy. “Madre Mia Gracias por los  Dias” combines the band’s full-length debut, as well as tracks recorded for a compilation, and I’d imagine these cuts will make for spirited, watch-your-face live shows where only the strong willed escape no worse for the wear. There’s a filthy low end to “Madre Mia,” a song that also infuses dome Spanish lyrics and levels you with crushing breakdowns; “Time’s Up” is in your face both musically and lyrically, with themes of imminent demise; “Red” charges straight for you, with cymbals being absolutely mauled; while “Obituary” toys with suicidal intentions, while speedy hardcore and a Spanish guitar outro dress this disturbing outburst. Personally, this is my least favorite of the three albums, but it’s only because of my tastes. I appreciate this album for what it is (I think it’s a really strong, emotional release, but the sound is just not my thing), and I can see some folks really being amped over this steamroller, so give it a shot and see if you don’t feel differently than do I.

For more on the band, go here: http://www.myspace.com/placeoffear