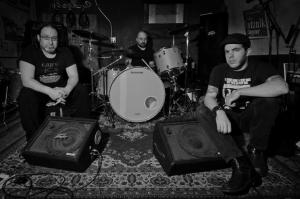 The New England Patriots play in the Super Bowl this weekend, and there have been major questions as to whether their shaky defense can hold up enough to bring home the Lombardi trophy. Turns out they have some warriors in their own backyard who might not be able to suit up Sunday but could drive the team’s defenders into a bloody fury come game time.

Black Pyramid label their violent emissions “psychedelic war metal,” and taking on the hulking sophomore effort from this New England-based trio lets you know right away that you better be prepared for fire and shrapnel. Maybe someone can slip this bad ass record into the locker room at Lucas Oil Field and get those dudes ready to decapitate Eli Manning. I don’t care either way. I’m a Steelers fan, and our defense isn’t allowed to tackle Tom Brady for fear of a lifetime ban from the No Fun League. Chances are if these dudes could suit up, they’d prefer to fly at you from the outside linebacker spot, with intentions of burying your chest in the grass.

So, in case you can’t tell from that opening, the music here is pretty relentless and unforgiving. It plays a bit with death and black metal, but a lot of what these guys do can be described as aggressive doom, almost like a gnarlier High on Fire or Gates of Slumber. The stoners are served as well, as their smoking riffs and leads should aim to please those whose minds are floating in the Milky Way, but for the most part, you’re going to be looking eye to eye with a battering ram. If said battering ram had eyes. You get what I mean. You’re going to get smashed, OK?

The nine tracks on “Black Pyramid II” are a step up from their initial full-length offering (they’ve put other smaller releases since then), itself a really good record that still gets played at my house fairly often. The new one’s got some highly refined songwriting, even better music, and two epics that are worth the price of admission on this dark terror. Add to that Andy Beresky’s vocals got a longer stronger and work perfectly to spread the band’s bleak messages. And that’s where out story gets sad. After the album was done, Beresky quit the band and went a little batshit on the band’s web site (according to a story at The Obelisk found here: http://theobelisk.net/obelisk/2012/01/23/blackpyramidinterview-2/), leaving drummer Cam Neely and bassist Gein  to pick up the pieces. They’ve since recruited guitarist/vocalist Darryl Shepard, but we have a little while to wait to hear stuff from the new unit. So onto the “II” version ….

“Endless Agony” kicks off the record with a tempo that reminds of early Iron Maiden and a melody section that sounds alarmingly like Civil War-era song “When Johnny Comes Marching Home,” and it’s only a hint of what follows. “Mercy’s Bane” is piledriving yet catchy, as they tell their tales of rape/pillage/plunder in a way only ancient villages could understand. They even call on Moloch to wreak some havoc. “Night Queen” is full of stoner gallop, as their character rides alongside the unholiest of partners. “Sons of Chaos” sparks memories of Mastodon’s earliest work, as well as everything Matt Pike has created, and it’s filled with tremendous soloing and guitar magic. “The Hidden Kingdom” is heavy in its own right, but if you sink underneath, you can see lush pockets of psychedelic keys and acoustic pathways. As for those epics, “Dreams of the Dead” seems half as long as it is, as it’s interesting, adventurous and stunning, while closer “Into the Dawn” plods along for its first half before continuously changing its pace and keeping you guessing just where in outer space they plan to drop your body.

It’s too bad this band came apart a bit right before putting out their best work yet, but they obviously have a plan for survival. Time tell if the next incarnation will be as effective, and a new guitarist/vocalist is a pretty large role to replace and could change the face of this group. But “II” is an excellent addition to your doom catalog, and while we wait to hear what the reworked lineup will bring to the plate, we can enjoy this stunner that’ll knock you on your ass.

For more on the band, go here: http://www.blackpyramid.net/

For more on the label, go here: http://www.meteorcity.com/