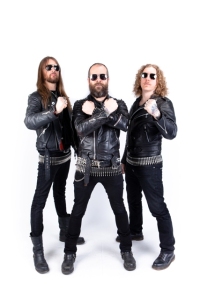 There is music that, for some reason, I associate with certain seasons when I first hear it. There is no rhyme or reason; it just conjures memories or feelings about a certain time of the year based on how it sounds.

For example, when I hear ISIS’ “Panopticon,” I think about the deep freeze of winter and no chance of warmth in the future. The album art doesn’t depict winter, the songs don’t have anything to do with it, but for some reason, the music makes me think of a frosty wonderland. Same goes for German black metal unit Imperium Dekadenz, whose last album “Procella Vadens” also makes me think of cold weather, but that one makes a little more sense. I notice I visit it most often come January and February, and I’ll probably do that for as long as my hearing works.

I noticed when taking on Grand Magus’ new record “The Hunt” that it makes me think of warm summer nights, when only a fan and a cold beverage can keep me sane. That makes absolutely no sense. The band hails from Sweden, not exactly the balmiest of climates, and usually the band is singing about wolves and the North and things you’d normally associate with coldness. Maybe I have something wrong with me because I have no idea where I get this feeling. Maybe it has something to do with most of my summers being spent outside on the porch, taking in and learning about every aspect of classic heavy metal, of which Grand Magus also seems to share an interest. 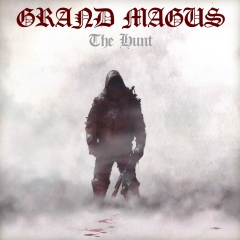 We last heard from the band two years ago with “Hammer of the North,” a record Roadrunner never even bothered to release in the States (I’m sure some other shitty album took preference), and before that was the excellent “Iron Will,” highlighted by one of my favorite Grand Magus songs “Like the Oar Strikes the Water.” Their themes and approach were similar to what classic bands such as Dio, Judas Priest and Mercyful Fate created, and what later bands such as Gates of Slumber and Slough Feg kept alive. Melody is a key to their formula, and singer/guitarist JB Christoffersson uses a soulful and clean croon that’s one of the strongest in metal. They never seemed to be able to gain a hold in America (past reissue projects aside), but now that they’re signed to Nuclear Blast, perhaps that will change.

The band’s music can be described as doom metal, and there certainly is that kind of finish on what they do, but to me, Grand Magus is perfectly described as classic metal. What they accomplish on “The Hunt” only amplifies that feeling, and someone who’s a hard rock fan but is reluctant to get too deep into the heavy stuff might even be able to digest this. They kick off with “Starlight Slaughter,” a catchy song with a swagger that would sound right at home on a classic rock radio station that still plays some modern songs. There are strong hooks, some glorious soloing, and a call of, “Rise, wolfkind,” that makes the song equally ridiculous and awesome. “Sword of the Ocean” starts with a heavy gallop and whips right into a fury that feeds perfectly into “Valhalla Rising,” a song that’s dressed in grunts and crunch, though it gets off to a slow start with its electro-thrash intro.

“Storm King” and “Silver Moon” are killer slabs of rock, with Christoffersson sounding positively in command with his strong, confident vocals, and the rest of the band – bassist Fox Skinner and new drummer Ludwig Witt – backing him up with thunder and glory. The record then takes a few interesting twists, with the piano and acoustic guitars that lead into the otherwise aggressive title cut, and the Euro folk that makes up “Son of the Last Breath,” one of the most impressive songs of their career. Sure, eventually the thing blows up and hulks to a finish, but the bulk of the track sounds like nothing Grand Magus have tried before. “Iron Hand” brings back the heaviness and makes like a pack of wolves on the hunt for prey, and finisher “Draksadd” is a bluesy and swaggering, letting the band inject a final dose of attitude into the record. Personally, it’s my least favorite song on the album and didn’t really work as a great conclusion, but that just might be me.

If “The Hunt” excites you and you want to dig into more of Grand Magus, Metal Blade has your ass covered. They’re reissuing 2005’s “Wolf’s Return” and the aforementioned “Iron Will,” so you can get a nice history lesson of how the band got to the point it is now. They’re both pretty solid collections, and if you also are hungry for some classic metallic sounds, these should do the trick for you. Plus, if you grabbed their re-release of the band’s self-titled debut and 2003’s “Monument,” your collection will seem kind of incomplete without these.

Grand Magus probably should be a bigger band than they are in the States, but that’s not really their fault. They’ve always made strong music that hasn’t gotten a ton of support from domestic labels other than Metal Blade’s worthy reissue treatments. “The Hunt” is as good as anything in their catalog, and with Nuclear Blast’s expansive reach, they should make a greater impact this time around.

For more on the band, go here: http://www.grandmagus.com/