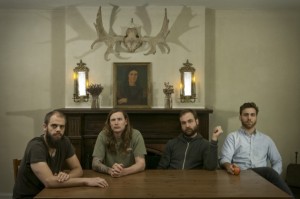 We metal fans are a judgmental bunch. We’re harsh, have gigantic expectations, and we are let down far too easily because we paint pictures in our minds of how things are supposed to be before whatever we’re imagining even surfaces. It’s kind of the fun of the genre, but it’s also one of the things that frustrates me the most.

But just because many of us jump to conclusions doesn’t mean we’re necessarily wrong. At least as far as it concerns being true to ourselves and our tastes. I’ve been there. I, like many a listener, waited with great anticipation for that new Morbid Angel album, and when “Illud Divinum Insanus” dropped, I was so disappointed that I wanted to disown any previous affection for them no matter how great they once were. A band more comparable to today’s discussion is Mastodon, who have completely lost my interest the past two records. I don’t damn them for changing and wanting to branch out; I just don’t think their music is nearly as good as it was when they were bludgeoning sludge warriors more than half a decade ago. I really tried to get with their new stuff, but I just can’t.

This brings us to Baroness, and I’m sure you’ve already read the umpteen million stories out there about how their new album “Yellow & Green” is a major departure and bears practically no resemblance to metal. That’s all pretty true. It’s a huge change, though I hesitate to say a radical one because you could hear strains of progression on “Blue Record” that seemed to hint they were heading in more of a traditional rock direction. And here we are. The 18-cut double record is the most varied, expansive of their career, and it’s the most unique-sounding album in Relapse’s entire catalog. That’s simply because most of their bands are beastly and heavy, and Baroness now decidedly are not. Whether you, as a listener, choose to embrace this new direction is up to you, but lack of metallic tendencies aside, don’t dismiss this based on decibel level. Doing so would be an error.

“Yellow & Green” was a shock to the system at first, despite having heard a couple of the tracks before getting the full-length promo stream. Having spent plenty of time with “Red Album” and “Blue Record,” I did have a knee-jerk response at first that this isn’t the style of music that made me love this band. Yet there was something about the songs that seemed to be hooking me anyway, and I’ve come to realize that’s because the material is really strong. These are really good songs, the best front-to-back compositions of their run, and the more time I’ve spent with this collection, the less I cared about how metal they are. More than anything, I want a record that’s well played, well written, and well executed, and I don’t know that Baroness could have done any better than they do here. This is a band that has morphed past their roots, and making them stay within genre confines would have stunted the growth of some really gifted musicians. So now I’m glad they went this route. I don’t have nearly enough great straight-up rock records, but now I have an exceptional one that’s occupying my time.

Lots have changed in Baroness’ world as well. For one, the dudes are a few years older, and time tends to mellow your rage. It’s not a bad thing to admit that, and doing so have helped the fellows — vocalist/guitarist/artist John Baizley, guitarist Peter Adams, drummer Alan Blickle, and new bassist Matt Maggioni (replacing Summer Welch) — progress and advance to the next stage in their careers. As noted, they had a lineup switch, and Baizley also moved from Savannah, Georgia, to Philadelphia. Things have been on the move, and their music reflects that. It’s a very human sounding, reflective collection as a result. It never sounds like this is an effort that’s put on to be more accessible or secure a larger record deal now that their contract with Relapse is up. This record would have sounded this way no matter what , at least that’s my guess.

There also is quite a difference between the “Yellow” and “Green” sides, so these really are like two separate albums joined together. “Yellow” sounds like a natural progression from “Blue,” with some might and grit you come to expect, but also with more melody, hooks, and approachability that could get them plum spots on rock radio playlists. If any of those people still pay attention. “Green” sounds like a progression from “Yellow,” with the songs stripped back even more, psychedelic atmospherics taking a major role, and more of an indie rock approach rising. On this portion, Baroness sound like a band that could open for Built to Spill or Wilco without those bands’ audiences feeling like they’ve been hit over the head. It’s quite a dynamic leap ahead for Baroness, even if it pisses off major metalheads with closed minds.

After a chiming little opening theme, “Yellow” kicks into high gear with “Take My Bones Away” and “March to the Sea,” the two tracks made most public by the band pre-release and two of the best songs they’ve ever written. Both will get stuck in your head for days on end, and again, if they could get radio play, they’d be two of the biggest hits of the summer. They both punch and chug along nicely, and Baizley sounds as confident as ever barking and crooning over top. “Little Things” is a scathing little psychedelic number, taking some hints from the 1960s, and Baizley solemnly offers, “They’ve taken everything, put us out to dry.” “Cocanium” has an ultra-trippy opening, but once the chorus rolls around and the song stretches its legs, things get more aggressive. “Back Where I Belong” is a damn solid serving of pure rock, with some of Baizley’s best vocal work, and it bleeds nicely into “Sea Lungs,” where some of their doomy, sludgy roots poke through. Closer “Eula” has moments of volcanic eruption and reflection, and it’s the longest track on the entire collection. The thing ends with a dizzying display of guitar work and some sizzling noise that lets “Yellow” burn away.

“Green Theme” opens up as a more bombastic cut than “Yellow Theme,” with some Brian May-style guitar phrasing and a more up-tempo journey, but it’s a red herring. “Board Up the House” is pretty damn poppy and doesn’t contain the typical Baroness edginess, but it’s a really strong song despite all of that. “Mtns. (the Crown & Anchor)” is sunburnt and static-filled, and it feels like a perfect song for an afternoon drive on a summer week day. “Foolsong” feels like ’70s-style singer-songwriter folk rock, with a nice psychedelic wash for good measure.

“Collapse” continues the slow-down, with Baizley singing, “We are all soured milk,” over a melody that’s pretty damn chill. “Psalms Alive” is the only song on here that hasn’t made a huge impression on me. It has the indie stylings and eventually crumbles into chaos, but it’s just OK. “Stretchmarker” is an acoustic number with guitars having a conversation and some Midwestern dreaming tossed into the mix. “The Line Between” is the heaviest song on this side of the record, with doomy chugging mixed with classic rock strumming that gives the track a neat feel. “If I Forget Thee, Lowcountry” is a quiet instrumental closer that ends the record with a heartful sigh and streaming tear. It’s about as non-Baroness a song as you’ll find. Well, until now.

I am fascinated to hear the reaction to “Yellow & Green.” So far fellow metal critics seem overjoyed with the collection, and I join with them in that sentiment. I ask you, the readers, to put aside any prejudice and consider these songs on their artistic merit. This is an incredible, career-defining statement, and while it steers sharply away from the sludgy, doomy past, there is what was in their hearts. It’s honest and real, and most importantly, the songs are fantastic. This is one hell of an accomplishment, perhaps their first step toward an organic stardom.

For more on the band, go here: http://baronessmusic.com/