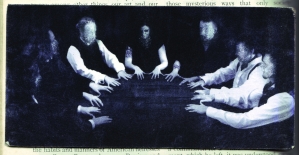 Weirdness in music doesn’t bother me at all. Actually, I encourage weirdness in just about everything, except for eating habits and anything that involves things being kept sanitary. Everything else is fair game. So when I get a record by a band that doesn’t exactly go by the book, that’s generally a good thing.

That doesn’t mean what I’m going to hear is going to get a gold star necessarily. For example, as much as they are heralded by so many people, I just can’t fully get with Peste Noir. I get what they’re trying to do, it’s really bizarre, it makes me listen the entire time, but usually once their albums end, so does my interest. On the other hand, Palace of Worms and Wrnlrd are really unconventional projects with music that comes at you from so many different points, but while they’re very ambitious and not afraid to bombard you, I find that the end results really work. I follow everything that both projects produce.

That brings us to the U.K.’s wonderfully theatrical A Forest of Stars. Actually, formally their name is A Gentlemen’s Club A Forest of Stars, and the membership includes female members, but let’s just go with the shortened handle since that’s the one on the spine anyway. I’ve had my ups and downs with this band that claims they hail from the 19th Century and takes on names and patterns of dress to boot. It’s all in good fun, and while unabashedly over the top, their albums keep me interested while I’m visiting. My reaction to their work, however, has been mixed, and I imagine it’s always going to be that way. But at least they’re not mundane and always have a ton of new tricks to pull out at every stop on their records. There is a TON going on at all times, and sometimes it can be overwhelming.

The crux of my issue always has been, always will be their charismatic, bleeding-heart vocalist Mister Curse, who sounds like a street thespian on crack cocaine. The guy, straight up, is a performer, and he throws every bit of himself into his performances. You never are left wondering if he’s into the material and the characters he assumes, and he is front and center of each piece, no matter how many instruments are layered into the production. My issue is with how crazed his voice comes off at times, because it can be unintentionally comical. It’s one of those voices that, if you exposed it to someone who doesn’t like metal and/or doesn’t take the medium seriously, probably would result in belly laughs. Mister Curse is a bizarre man, yet you can’t help but love him, even at times when he annoys you. Luckily on the band’s third record “A Shadowplay for Yesterdays,” he’s at his very best, keeping those moments that make you blush to a minimum and displaying just how engaging and effective he can be as a frontman. And a showman.

As for the rest of the band, they’re spirited, full of heart, and never afraid to mix raw black metal with folk passages, rustic scene-setting, carnival whimsy, and classic rock thunder. In fact, much like their frontman, the band never has been tighter, more focused, and more alive than they are on “Shadowplay.” There are times when their work here is astonishing, and you might be able to sit down someone who likes Bathory and Mayhem with someone into The Decemberists and have everyone walk away thrilled. That’s not easy to do.

“A Shadowplay for Yesterdays” is a concept piece, which you’ll figure really early on as the record opens up to you. The story here, quite loosely, is about a man who is at a sort of crossroads with himself. As the band puts it, he’s at a point where he’s struggling between virtue and a blasphemous self-destruction, and you’re left to decide what path the character takes as these tracks play out. It’s plain from the music and the song titles, the option of choosing a god or heading toward the confines of the church are not pleasing ones, so the latter seems to be the path of least resistance in his mind.

“Directionless Resurrectionist” sets the stage, as it’s an introduction piece that leads the way to “Prey Tell of the Church Fate,” an eerie, off-kilter song that is menacing and psychotic until the rest of the band takes the reins from Mister Curse and navigates through a thunderous prog rock wave. Actually, the band’s prog chops are stunning on this album, showing a true elevation of their capabilities in that style, and it’s what gives these songs their heart and soul. “A Prophet for a Pound of Flesh” is dramatic and sweeping, with rants and growls sprinkled amid sweeping guitars, acoustic treading, and some lovely contributions from Katheryne, Queen of Ghosts, who also provides lush strings and woodwinds. “The Blight of God’s Acre” lets Mister Curse take full command again, as he becomes the demonic storyteller in the vein of classic King Diamond. That all bleeds into “Man’s Laughter,” a cosmic, dreamy interlude that unfurls alien influences and leads into the second half of our tale.

“The Underside of Eden” is coarse and emotional, with Mister Curse taking on a David Bowie-esque demeanor. He howls, “God is dead, and dead is God!” at his theatrical best, almost as if manning a singular spotlight-lit stage, and the band blasts behind him with folk and metal. “Gatherer of the Pure” is just wacky, opening with farm animals squealing, and a sea chantey-style melody kicking up before it dissolves into psychedelic madness and noise. Toward the end, behind all that chaos, come group vocals that sound fitted for some twisted Disney production. “Left Behind as Static” is truly sad and isolated, with the main character wondering about his place in history and if it’ll simply dissolve into soundwaves. Meanwhile, the band takes time to touch upon just about every style they spill into each song. The dual “Corvus Corona” pieces stretch out to nearly 10 minutes, with the first half acting as a precursor and scene-setter for the second, that’s built on weird piano, harsh undertones, and the one spot where Mister Curse really goes overboard vocally. Closer “Dead Love” is a sobering, seething end to the story, with no one left a winner, and no positivity bubbling to the surface to send listeners home happy. Not every story ends happily, after all.

“A Shadowplay for Yesterdays” is a Forest of Stars’ most cohesive, enjoyable album to date, and it makes up for 2010’s maddening and frustrating “Opportunistic Thieves of Spring.” The band never has sounded better, and they’ve gone from an interesting troupe to a massive force of prog/black metal/folk goodness. And they should only get better. Mister Curse, he still frustrates at times, but he’s the perfect narrator for this tragic tale. This band, and this record, is not for everyone, and those not equipped to deal with ambitious, go-for-broke artistry might be terrified by what they hear. But that’s what makes this band so damn interesting. You might be baffled by what you hear, but you’ll be hard pressed to turn away.

For more on the band, go here: http://www.aforestofstars.co.uk/

For more on the label, go here: http://www.prophecyproductions.de/front_content.php