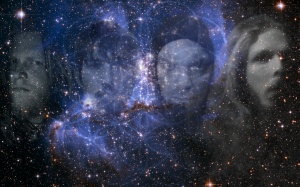 My friend Carl and I figured out we were philosophers at a pretty young age. Lots of other kids were talking about superheroes, space warriors, and things of that nature, but Carl and I were trying to figure out how everyone got here, what was going to happen when we died, and how something that holds together all existence could not have existed at one point. We scared the hell out of ourselves as we tackled the ideas, and these topics often kept me awake at night.

Maybe other 10-year-old kids also were terrifying each other on humid summer evenings with the same existential conversation matter, but we felt like we were the only ones and that we had no way of knowing the answers to our questions. That struck me all over again when, on the opening track on Seider’s second full-length “Ginnungagap” (a gap or void that various mythologies talk of existing before the dawn of creation) during the clip they use of Carl Sagan talking about the creation of the universe, how a god could have been involved, and how if we’re going to just assume a higher power is there and always has been, why can’t we just assume the same of the universe? We don’t know, we can’t prove anything, and when it comes down to it, does it really matter at all to our lives and what we do with ourselves?

Really, we’re just specks. We’re irrelevant to the universe as simple beings, and one day when the world is gone and so are we, no one will care. Maybe that’s not the happiest thought to take away from “Ginnungagap,” this band’s impressive 87-minute new statement, but I defy you not to think of some of the same things after taking on this six-track, penetrating epic that could make you seriously consider your place in the universe, how fragile it is, and how your brief existence on this earth might have no impact on anyone at all, which is a sad thought. But we’re still here, and we have time to change that at least a little bit, and the guys who make up this band are doing their best to make a permanent mark on the metal world no one will forget anytime soon.

As you may know, Seidr is comprised of a notable cast of musicians who have become well known and loved in all kinds of metal circles, including guitarist/vocalist/etc. Austin Lundr (Panopticon, Kolga, etc.); guitarist W. Crow (Wheels Within Wheels); bassist A. Nicholson (Below, Alegionnaire); and drummer John Kerr (Vit). Putting all that creative energy together makes for a creative explosion, one that proves they put their ambitions and hearts before anything else. As good as their debut “For Winter Fire” was (and is), they really surpassed that effort with this new record, that does take an effort to absorb.

We hinted at opener “A Blink of the Cosmic Eye,” a 17:13 journey that begins with sitar and a New Age lathering that moves you into the cosmos. Chants trickle into the picture, doom drone unfolds, and a huge pocket of atmosphere leads into the Sagan quote and then a sludgy, violent explosion with grisly vocals and swirling murk. “The Pillars of Creation” has a clean intro that’s breezy and relaxing at times before the tumult totally drops and gurgly vocals spill out. The band eventually works itself into a proggy frenzy before finishing the song with doom tonnage. The title cut runs a challenging 17:03, starting off with a detonation and unforgiving heaviness, complete with vocals that sound both dangerous and emotional. The bulk of the song is massive and drubbing but also pleasingly melodic so that even when they’re breathing fire, they’re letting other colors trickle into the waters. The final few minutes let the song dissolve into drone.

“As You Return” is nearly seven minutes long but acts more as an interlude into the rest of the album. It has folky woodwinds, woodsy acoustics, and chant-driven singing that feels mesmerizing. “The Red Planet Rises” seems like it will ease past you gently, but minutes in the song it explodes into a mucky, thrashy monster that tears a hole in the universe. The growls are gritty, and the song hits an emotional climax with a few  minutes remaining, before the music drowns out with a drone assault and guitars quivering cosmically. The closer “Sweltering II: A Pale Blue Dot in the Vast Dark” (the first “Sweltering” was a track on their debut)  is a pretty good explanation for the marble we’re all living on, and the 25-minute epic brings the record to a huge, mournful close. The vocals drip with anguish and pain, and as good as they are throughout this album’s run, they really reach their peak here. The song is a pure blackening, as it’s easy to imagine the Earth shriveling and dying in its corner of the universe. The wails are desperate, the band lets its energy burn its brightest, and the frenzied caterwaul eventually subsides in a bed of swollen noise. You can’t help but be anything but exhausted when this song reaches its end.

Seidr never has been an easy band to get to know, as it takes travelling alongside them to really get inside their headspace. Because of some of the things I started thinking about existence when I was a kid that carries over into today, I really identified with the subject matter on the surface and was moved even more by the music. You’ll want to sit down, find a dark corner, and experience this record when you have time to truly invest yourself in it. “Ginnungagap” is Seidr’s best work yet, and as long as you don’t mind going into some dark places that might sober you about your existence, you might find this one of the year’s most rewarding metal albums.

For more on the band, go here: https://www.facebook.com/SeidrRitualdoom

For more on the band, go here: http://bindrunerecordings.com/