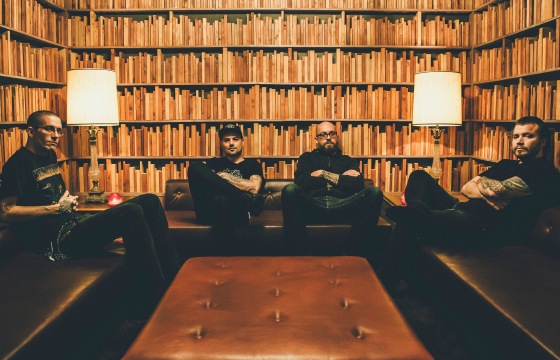 How many bands in heavy metal truly scare you? Are there really that many? A lot of times, bands trying to get across that terrifying image only end up coming off as wacky. Does anyone seriously shiver at the sight of a bunch of grown dudes in corpse paint? I didn’t think so.

It’s not so much the image of a band that conveys fright anymore, but the music. Again, there aren’t a lot of bands that even get that right and really find a way to shake you up, but one band that always answers the bell when it comes to freezing your blood is Chicago-based doom band Indian. Looking at a picture of these four, yeah, they look surly. They might not be the first people you’d want to approach to ask for directions. I’m just getting that from their picture. But their music is another thing entirely and can cause your guts to liquify in no time at all. They go the extra mile to get across their psychological terror and always make sure they pummel you as hard as possible in the process. In fact, their new record “From All Purity” ups the ante on that to a ridiculous level. It’s positively (negatively?) scathing. 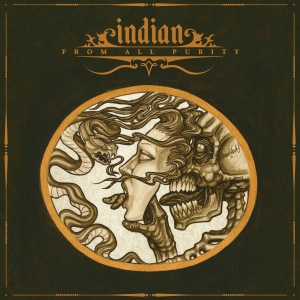 “From All Purity,” the band’ fifth full-length effort and second for Relapse (2011’s “Guiltless” was their debut for the label), is a monster. Because it sounds like one. It’s like it was grabbed unwillingly from the underground, forced to gasp sooty air, and shoved into existence to maim and scar anything in front of it. You could imagine this thing as a beast slithering around, clawing the earth, bleeding everywhere, and causing screams and panic from anyone who encounters the thing. It would be damned by all, with ground troops forced to come in and attack the thing before it can destroy and sicken all. I know that all sounds a little silly, but put this killer slab on, turn it up as loud as you can, and see if it doesn’t make sense. I might have even sold it short.

Indian actually are one member short from the lineup that recorded “Guiltless,” but you won’t know it from this mammoth assault. On guitars and vocals are Will Lindsey (Anatomy of Habit and ex-Nachtmystium, among others) and Dylan O’Toole, who both keep things deranged, destructive, and demented. With them are bassist Ron DeFries and drummer Bill Bumgardner (also of Lord Mantis), who keep the low end thick and punishing, like you’re being beaten senseless in a pit of tar. Not a comfortable experience in real life, but it makes the band’s brand of doom coat you and maul you just right. I haven’t seen anyone credited with noise on this record, but there’s still plenty of that to make this collection even more suffocating.

You’re indoctrinated quickly in both sound and lyrical content with opener “Rape,” a pounding, maniacal, noise-rich track that is sweltering and mean. “The rape of everyone!” is shouted (at least that’s how it sounds, as I don’t have a lyric sheet), as the band hits on an off-kilter, psychotic fix that is unhinged and animalistic. “The Impetus Bleeds” pounds and drubs, with a dark melody slithering behind everything, and static rumbling while the band scalds you with their might. The sound is bathed in corrosion, the vocals are volcanic, and the final minute of solemnity gives off a hint of sorrow and pain. “Directional” is a slow-hulking crusher, with the vocals set to mental abuse, and the band clubbing you with throbbing doom that keeps kicking and punching at you until it finally subsides all of a sudden.

“Rhetoric or No” is one of the scariest songs in this band’s entire bank, as it is savage from the start, with massive doses of heaviness, mournful guitar lines that add an extra shade of darkness, and sizzling noise thats lead into fiery, damaging shrieks that dissolve into deranged madness. This is a huge undertaking emotionally, and I can only imagine how this song is going to kill live. Then it’s on to “Clarify,” a song that’s drowning in piercing noise, filthy drone, crazed zaps, and shrieked shouts that sound borderline torturous. The ambiance this track achieves is skin crawling, and the howls that are smeared over this, formless and hopeless, simply make the track that much heavier emotionally. Closer “Disambiguation” starts off cosmically slowly, like you’re being poisoned by some intergalactic clouds, and then gravel-filled growls roll in, howling lines like, “All I want is repetition!” A dark funeral doom wave laps up, adding a black texture to the mix, and then drums explode into a double-kick storm, as the song grows thunderous. The final moments are both anguish-filled and blisteringly devastating, as the final moments of relentless hammering suddenly dissolves into space. It’s the perfect exclamation point on the end of the murderous statement.

Indian’s campaign of terror is alive and well, and unsuspecting listeners might find themselves running for cover even from a smaller dose of “From All Purity.” This isn’t a riff-fest for you to hammer out at a party with session ales. It’s a dark, angry, potent record best served with a dark, barely legal-ABV beer, when you’re at your lowest trying to find meaning in your late-night haze. The only answers you’re bound to find are ones that’ll disturb you to no end, so hopefully you’re well enough to handle what Indian are likely to help you find.

For more on the band, go here: http://www.indiandoom.com/

For more on the label go here: http://www.relapse.com/