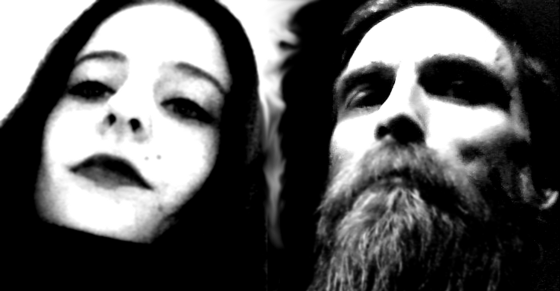 We’ve had a lot of brutality, destruction, and doom in these parts lately, because for the most part, that’s what we do here. So it’s nice when we can step back and try something a little different. We could be in that territory where today’s musical selections might not be embraced as true metal, but certainly there’s going to be crossover appeal. I’m evidence of that.

Lethe is a new project from members of two notable bands, and the music contained here finds both of them branching out beyond their better-known projects. Anna Murphy (who handles hurdy-gurdy and vocals for Swiss folk metal stalwarts Eluveitie) sings for Lethe and also takes on lyrics, bass, piano, and computer-based effects. Joining her is Tor-Helge Skei, of Nordic band Manes (he’s on guitars, keys, and programming), who started their path far grislier than what they offered up over the bulk of their run, when they also took a more experimental bend in their music. With Lethe, he plays synth, guitar, bass, programming, and some of the lyrics, bringing his wealth of experience into this new journey. The duo collaborated with Eivind Fjøseide (guitars, composition) as well as a number of other players for an album that’s an enthralling dark trip down corners most metal fans may not commonly examine.

There definitely are some metal edges to this record, some powerful expressions, and parts that could make your blood surge, but those are kept to sections that show up now and again. There is a generous trip-hop, electronic, and dark rock presence as well, enough that it pretty much dominates what you’ll hear on the band’s debut full-length “When Dreams Become Nightmares.” People who love Ulver’s most ethereal work, as well as the Gathering, Katatonia, Dead Can Dance, and Portishead also could find themselves lost in this adventure, excited to see what dark flashes this record has to offer. It’s easy to be overcome by this album, and I recommend listening late at night while relaxing, reflecting, or meditating.

Opener “In Motion” will give you a good taste of what’s ahead, with its pulsating keys, Murphy’s strong, slightly raspy vocals, psychotic moans, and a nice pop sensibility that gives the song an extra kick. “Haunted” opens with some doomy riffs before keys sweep in again, blipping and creating a sense of cosmic wonder that stays in place for the song’s duration. “Come Look at the Darkness With Me,” one of the songs they released on a two-track preview offering last year, opens with vocal samples of people talking about depression, suicide, and that path no one wants to tread, and with Murphy singing lines such as, “I want it to end a little more each day,” she conveys the right amount of anguish and pain into the song. It’s a definite highlight. “Ad Librum” is both eerie and a little heavier, with male vocals leading the way (both Asgeir Hatlen of Manes and Niklas Kvarforth of Shining are credited with vocals, but I believe it’s Hatlen here) into a spooky, eerie territory. “Love Pass Filter” is the only song that doesn’t fully resonate with me. It has some doomy part, weird beats, and glitchy effects, but it isn’t taking hold.

“Oblivion” brings things back into focus, with clean guitars giving way to some satisfying crunch, dreamy textures, and Murphy wondering, “Where do I go from here?” “You,” the other track they previewed last year, is another killer, with dreary guitar work, zapping keys, Murphy in full command vocally (though Hatlen lends his David Bowie/Peter Gabriel-style singing as well), and a heavy trance setting in. This is my favorite of all of these tracks. “Transparent” is mostly an instrumental cut, with voices talking of fearing being seen as abnormal, as the music pulsates around those words. “No Reason” is 9:23 of the band setting up dream-inducing repetition, softer melodies, and Murphy repeating lines such as, “Small road and narrow leads to nowhere.” It’s a really effective song that could lead to you staring into space, wondering, during its run. The closing title cut is a moody, slow track that’s a perfect album capper, with the song trickling along like a half-frozen stream and Murphy singing, “I never want to dream again.”

It’s strange saying Lethe have a bright future when their music is so dark, but you know what I mean. Listeners who can handle nothing but brutality might have a hard time adjusting to this, but if you like dreamy, edgy, depressing music that travels metal’s outer boundaries, you might find yourself fixated with this record like I am. I certainly can’t wait to hear more from this band, especially after they have a while to soak in their murky juices and get an even better understanding of what they’re capable of doing.

We mentioned Manes earlier, and if you’re new to the band and intrigued, or if you are a long-time fan that would like a collection of some of their rare, harder-to-find work, their weirdly titled new compilation “Teeth, Toes, and Other Trinkets” could help you get there. The collection contains obscure songs and alternate versions of some of their tracks and dates back to the band’s sophomore full-length “Vilosophe” from 2003 all the way to 2007’s “How the World Came to an End” long player, that last studio effort. So we’re talking a pretty specific period of time, rather than all the way back to their ’90s days (then again, when the band returned in 2002, they were a pretty different band), but it’s a pretty worthwhile investment. It also can warm you up for their planned comeback LP “Be All End All.”

New track “Blanket of Ashes” shows real promise for whatever the band has coming up on their fourth album, and it certainly has the chance to reach beyond metal audiences into, say, fans of the 4AD realm. A live version of “Ende” is a really strong rendition of this “Vilosophe” cut and shows their power live. There are some other fun pieces such as a remix of “The Cure-All” from “How the World Came to an End”; dreamy, Radiohead-like “One More Room”; spacey and transcendent “Transmigration”; and an 8-bit version of “Deeprooted,” the opening cut from “How the World…,” that might make you want to whip out your Nintendo, if you still have one. This is a worthy collection that either should reaffirm your affection for the band or make you a new fan.