It’s kind of sad that running into a band or record that displays some actual creativity is something that has to be trumpeted. Like, OK, right before writing this, I got a press release about a damned pop-punk band releasing their new song “Six Six Six.” I mean, what? Really? Can you at least try a little? Ugh.

Anyhow, you’d never catch a band like Phoenix, AZ, maulers Take Over and Destroy trying something so blatantly obvious. For one, they’d likely laugh at such a silly sentiment, and two, they’d make things so messed up and weird that most people would have to take time to sit down and figure out exactly what’s going on. The band’s latest record “Vacant Face” (follow-up to last year’s “Endless Night”) actually could be a nice label for what’s going on over the bulk of the music industry, where band after band turn in non-descriptive, personality-free, non-creative slabs that ultimately sell bundles in your local big-box outlets. This band knows nothing about being anything but themselves, a fiercely independent group of musicians that uses every moment of this album to turn heads, confuse, emote, and crush your puny heart again and again. It’s such an enthralling, goddamned fresh listen, that it’s a wonderful changeup from the glut of records I’m commonly tangling with. You can feel that right off the bat, and if for some reason you can’t, I won’t … say anything … about your ability to tackle some demanding shit. 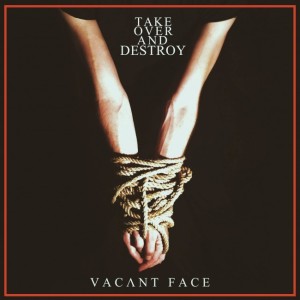 This band also knows how to keep you guessing sonically. Take Over and Destroy mix doom, sludge, post-punk, noise, and goth rock into a giant bubbling cauldron that’s just waiting to be tipped over to scald you. The fellows–vocalist Andrew Leemont, guitarists Alex Bank Rollins and Nate Garrett, bassist Dylan Thomas (also of grinders Landmine Marathon), drummer Jason Tomaszewski, and organist Pete Porter–are dark, dangerous, prodding, poking, and snarling as a unit, and their delivery and absolute submission to their deranged cause also go a long way toward making this record so fun and altogether unforgettable. In fact, if you can’t find a way to be engaged by every word that dribbles out of Leemont’s mouth, I’m a little worried about you as a person. They don’t come that much more compelling than he is. Imagine a mix of fallen Joy Division frontman Ian Curtis and Atriarch howler Lenny Smith.

The title cut is your introduction to this 11-track menace, starting with disarming clean guitars and spacey noises, before harsh vocals pierce the calm, melodic guitar work gets you engaged, and goth-style singing emerges to splash a little more darkness on this puppy. “Summer Isle” is the first real eye opener on this one, with organ keys pumping behind the pounding, clean bellowing that sounds dashed with morose pain, deranged howls emerging later, and eventually a break-neck pace that pulls you with force to the end. “Glance Away” begins with strange, swirling organs that could make your head spin, and howled, haunting vocals and dark textures dash any sense of hope. “Split Screen” is a face-splitter, with organs romping, sludgy guitar work layering everything with muck, and the band hulking and thrashing forward with reckless abandon. The vocals sound scarred for life, and the music does its best to match that damage with chiming bells, eerie whirring, and gang shouts that shake your bones. “Terminal Burrowing” is the longest cut at 7:32, and it’s a heavy, writhing, tortured soul driven by gothy singing, a peculiar but tasty Southern rock-style guitar line that snakes through, and a spooky finish that bathes itself in cosmic soup.

“Deep End” rips open any congealed scabs with blistering drumming and furious playing, including some really fun lead work that positively sizzles. “Dominance Shifts” is just relentless, with guitars boiling, menacing and ugly vocals, and the whole thing succumbing to a suffocating blaze before acoustics blend in to hint that the worst is over. But it’s not. The fire rekindles, and it scorches to its conclusion.  “Battle Moon” has some excellent classic metal-style guitar work, throaty growling, more tar-coated clean singing, and one hell of a quaking, delirious finish. “Where Seasons Lay” is a total foray into post-punk madness with cold, trickling guitar work and passionate vocals, with Leemont wailing at his damaged best. “The Fly Is Awake” is a brief instrumental that’s awash in sci-fi sentiment and alien transmissions, and that leads to the astonishing closer “Attrition” that opens with dark guitar work, harsh vocals, and more incredible riffs, of which there is no shortage on this album. The carnage eventually subsides for a while, with dusty acoustic guitars giving off a nighttime desert feel. Then the intensity ramps back up with the drums being beaten severely, noise swirling and surrounding like a swarm, and a sense of metallic hugeness that puts a giant exclamation point on the end of this record.

Take Over and Destroy can teach a pretty weighty lesson to other bands that think just being able to plug in and play is good enough. If you’re missing charisma, character, and true creativity, then what are you really accomplishing? “Vacant Face” is an exciting, daring, threatening record from this unique band, and there’s not bound to be another album quite like this one the rest of 2014. This is a band on the cusp of making a huge difference on a wide scale, and when they do it, this group of independent-minded killers only will have themselves to thank.

For more on the band, go here: https://www.facebook.com/TakeOverAndDestroy