Hearing a band you’ve long followed make leaps-and-bounds progressions on a record is one of the most exciting experiences in all of music consumption. We had a case earlier this year with the great Morbus Chron, whose second record “Sweven” was a game changer not just for them but for all of death metal. There’s a reason that’s still played regularly in my house nearly a year after its release.

Now comes “V.” the new full-length from the Flight of Sleipnir, the unclassifiable Colorado-based duo who have been making compelling records since their 2009 debut “Algin + Berkanan.” They flew relatively low under the radar on the small yet steady Eyes Like Snow label, putting out some of the most mesmerizing arrays of black metal, doom, and folk anywhere. The fact that Napalm Records swooped in and grabbed these guys for their epic fifth record is proof that hard work and great craftsmanship indeed still pay off, and they responded to what would be their newfound expanded audience with a record that redefines what these guys can do and ups the ante for every band going in metal. They retain their heaviness and savagery, but on “V.,” they inject more vocal melodies and an enhanced psychedelic experimentation to make their sound more full bodied and dynamic. 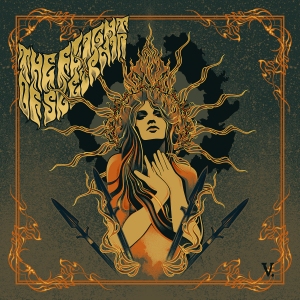 The Flight of Sleipnir, who take their name from Odin’s great eight-legged steed, are but two men. Clayton Cushman handles guitars, bass, keyboards, and vocals, while David Csicsely contributes drums, guitars, and vocals. These guys have played together in other bands including Archeronian Dirge and Throcult, and it’s clear their union in this band is growing stronger and more imaginative by the day. This is another record that, sadly, isn’t getting the adulation it deserves because of its late-year release. But make no mistake, any writer worth his or her salt will have this album at least in consideration for best-of-2014 honors, if they don’t have it affixed high atop their list. It’s that good, that mind-altering, and you’ll be making a massive mistake ignoring this incredible epic.

“Headwinds” is the first gush of air that greets you, floating in on clean, spacious melodies that are delicate and folk-led, making you feel like you’re traveling on foot in the middle of a forest somewhere. Lush vocal harmonies seep in, and then the power ignites, with shrieks spreading over the cascading instrumentation, and the drama thickening and enthralling. The guitars get gazey, the energy crushes like a tidal wave, and the harshness mixes with beauty to make for a heavily textured package. “Sidereal Course” has a great psychedelic opening, one that’ll get inside you and make your blood rush to your head. There is breezy singing that matches the ambiance nicely, with atmospheric guitar lines leading the way. Naturally, the song explodes, heads into the cosmos for inspiration, and has a pummeling ending that spills right into “The Casting” that clobbers right away. There are amazing, enthralling progressions during this one, with the vocals sounding both grisly and majestic. There are warm folk underpinnings that add deeper colors and a conclusion that is flushed with cold oxygen. “Nothing Stands Obscured” is utterly gorgeous at the start, with the spacey melodies and soft vocals making it perfect fodder for night sky staring and dreamy exploration. Eventually the bottom drops out, as destructive riffs and fierce growls blast into the scene and ignite great fires. The tempo keeps switching back and forth, leading you through tumult and calm, and once it ends on a blazing note, you’ll have no doubt you’ve been on an exhausting journey.

“Gullveig” has a super tripped-out start that’s like nothing else in their arsenal and might make you wonder if you weren’t slipped some mysterious medication. Along with mid-tempo guitars strumming come these lava-bubbling lines that are absolutely infectious. Yeah, it gets gritty eventually, as you know it will, giving you as chance to thrash about, but it always goes back into those intense, bubbling early sections that make this track stand out from the rest. Great imagination, and a track that gets better every time I hear it. “Archaic Rites” is a haunting one, with slow drumming leading into the body of the cut and lush female vocals sitting behind the smoke to add a different element of beauty. Raw and grimy guitar work darkens the scene for a while, though you eventually get back into fresh air with flutes lending a gentle hand and keyboards wooshing in to thicken the fog. Sure, that calm eventually disintegrates, and the climax is built with battle horns that sound like they’re signaling the beginning of a climactic battle. That leads to album finale “Beacon of Black Horizon,” a cut that is blistering beyond belief in its opening minutes, stomping and kicking up dirt like the beginning of that intense war. The vocals are thorny and fearsome, with both dealing penetrating blows, but that’s all before pulling back and letting slower, soaring melodies take shape. This is quite a trip, this 11:26-long epic, twisting and turning, churning and burning, and letting intense colors bleed out and stain the ground. The howl of, “Return to the hall of your fathers!” is dressed in both triumph and tragedy, as you’re not sure if that arrival is on this plane or the next, and the cut has a rustic, yet noisy finish that slams an exclamation point at the end of this album like a battle axe being sunk into the earth. Just breath-taking and exciting stuff here.

The Flight of Sleipnir’s incredible progression from their meek beginnings to where they are now has been a pleasure to experience. “V.” is their ultimate statement so far, the best and most realized work of their careers, a document that deserves to be fully absorbed and praised on high. Hopefully the record doesn’t trickle away with 2014, a lost gem that had an unfortunate release date. This is one of the most creative, infectious records of the year, and you’ll be committing a sin against metal if you don’t seek out “V.” and explore every crevice.

For more on the band, go here: http://www.theflightofsleipnir.com/

For more on the label, go here: http://www.napalmrecords.com/