True human emotion and compassion in metal sometimes gets an unneeded slap in the face. How much more mud is going to be thrown in Deafheaven’s direction, despite the fact that all of the scene accusations have been brought on by people other than the two primary members of the group? And now that Alcest have taken a more melodic root, the criticism has come out in full. Not true! Not black!

All of this is a precursor to today’s album, that being the stunning, exciting debut full-length record by Vargnatt called “Grausammler.” Like the aforementioned bands, this project, led by primary member Evae (Impavida, Trautonist), bursts with heart and melody, makes you feel like him pouring his heart and soul into the music, and making you feel the feelings. That, I suspect, is what makes black metal fans so hesitant about the other well-known, very accomplished bands I mentioned, because having real, human emotions goes against the antagonistic, destroy-all feelings that think they have in their hearts. I think what Evae (as well as drummer Wiedergaenger) does on this record is brave, incredibly catchy, and the introduction of another great new force into the face of black metal. 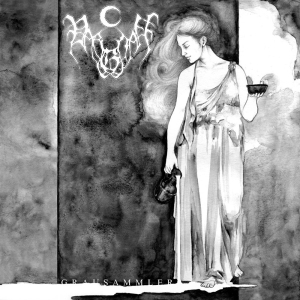 While this is the first full release for Vargnatt, the project has been around for nearly a decade. There are two demo recordings (both released in 2007) as well as an EP (2012’s “Durch die Stille…”) to this group’s credit, but all of it has been building to this record. We mention Deafheaven and Alcest, whose followers likely are to love Vargnatt’s music. But there are comparisons to groups such as Ulver, Burzum, and Bosse-de-Nage that would make a lot of sense, and what you’re going to get is bloody heart on the sleeves, emotionally rich songs that will make you weep along with Evae and maybe be OK with getting in touch with the damage in your heart and soul.

“Welverloren” gets things started in a clean, serene fashion before the burst of power you’re surely going to be expecting. Huge melodies are afoot here, grabbing you and taking you on a ride, and the wails are particularly impassioned, a theme we’ll revisit often on this record. Keys begin to drip, giving a New Wave feel to the song, and the final minutes are spent going back and forth from gentle to gargantuan, with the heart churning all the way. “Allein in mir” trickles open, letting it gain some momentum before the track blows apart. The tempo is punchy, with the playing coming across as both spellbinding and emotionally rich. There are post-rock touches, with Evae letting some rage come forth, sometimes making you think the man is allowing himself to be psychologically tortured by what’s going on here. The song eventually rests on fields of synth, a sense of peace, and some wordless vocal harmonies to hammer home the finality. “In der Irre” has a calculated start, with things naturally settling into place, and the surroundings feeling airy and oxygen-infused. Things start to get murky, with the song coming on like a dark, all-day summer storm, and all elements cascade down, with the vocals wrenching hard and matching the music’s intensity. Everything builds to a crescendo before it starts to give way, and dark strings (provided by H. es. a.e.) take what’s left and carry it away.

“Vor den Toren” has melody bursting from its seams right away, with guitars burning, the vocals sounding pained and vicious, and everything just bleeding heavily. Acoustics blend in later, making the song feel more atmospheric for a time, with winds whipping about to signal the oncoming fury. And when it strikes, it feels like the right swing, as the track unloads a tidal wave of expression and tension that’s very thick and ultimately rewarding. “Grauwandler” is a brief, acoustic-heavy instrumental cut that acts as a breather as well as a bridge to the caterwauling title track conclusion, which explodes with energy right from the start. Savage vocals are a major part of the mix, as are thundering melodies that rampage all over this thing. There’s a cool rock n roll vibe to portions of the song, as Evae rambles forward, and later that’s traded out for some devious black metal-style riffing and scathing growls. There are moments where the track returns to the cold darkness, bringing a chill and making you think there will be calm, but it always returns to its blazing ways, pummeling and devastating you until the cut finally lets its power bleed out.

Granted, this style of black metal is starting to swell, but Evae and his Vargnatt project prove an important part in that growing sub-genre. “Grausammler” definitely is heavily emotional and heart-twisting, but it also has darkness and rougher moments where brutality shines through. This is a really strong album, one that can accompany you on many levels of your own personal psychological housekeeping.

For more on the band, go here: https://www.facebook.com/vargnattofficial

For more on the label, go here: http://www.eisenton.de/