Chaos and fury are constants in the world of metal, and sometimes it seems like bands are trying to outdo each other by going to more ridiculous levels to be extreme. Of course that’s not really a criticism because the heavier and more brutal one can be really is a measuring stick. Yet some do it better than others, and others stand on top of the wall, watching the contenders try to match their grit.

Revenge is one of the bands at the top of the wall, hurling skulls and shrapnel at those trying to oppose them and beating back the surge with unforgiving terror. The band’s name is Revenge. The band’s music sounds like revenge. It works perfectly. Over the past 15 years, this Edmonton-based band has been carving out a reputation as one of the nastiest, most dangerous in underground metal. They have succeeded with explosive leaps and bounds. The music, from their very beginning with their introductory 2001 EP “Attack.Blood.Revenge” all the way to their new full-length “Behold.Total.Rejection” has been a constant barrage of noise, horror, and smothering. They don’t relent, they don’t waver, and they don’t compromise, which is what makes this band so revered. The new record is just more of the same. Which should make all Revenge minions very happy. 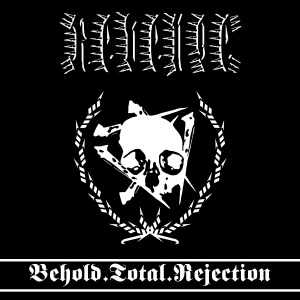 Revenge remains the hellish creation of J. Read, who handles all music and lyrics, as well as plays drums and does all of the vocals in the studio setting. With him is Vermin, who plays guitar and bass and also handles vocals in a live setting. They are a formidable, punishing duo in any setting, and on this fifth record (their first for Season of Mist), you will feel like you are in the middle of a war. The tempo is pretty much the same from the start to the finish, and there is no room to breathe at all. These 10 songs are on a constant, filthy rumble, with the band sounding as rough around the edges as ever but also completely devastating, just in case anyone was worried they would change with their upgrade in record label. It’s the same Revenge, which is a damn good thing.

“Scum Defection (Outsider Neutralized)” bursts immediately, almost as if the record happens to open on an assault that’s been well under way. The track is hellish and clubbing, with the vocals sounding like mechanical gurgles and snarls, with sounds splattered all over. “Shock Attrition (Control in Decline)” is raw madness, with the drums clobbered, the tempo speeding along, and infernal shrieks meeting up with blood-curdling growls. Soloing rips out of the frenzy, while the pace scorches. “Wolf Slave Protocol (Choose Your Side)” is like the opening salvo of war, with the sound exploding, and the band whipping through with reckless energy. The vocals sound like they’re boiling in blood, as doomy riffs arrive, and shit flies everywhere. “Mass Death Mass” hits a slight death groove, one of the few deviations from the all-out barrage, though that later melts away and insanity strikes again. This one is bloody and short, served just right. “Mobilization Rites” also has some muddier guitar work, as total annihilation arrives and rains down fire. Everything burns and smokes, with the band thrashing heavily, and chaos being released to stomp all.

“Silent Enemy” has bass thundering and poking through right before the pace detonates, with every element smothering and the vocals sounding like they’re delivered by an attacking Balrog. The growls become rhythmic belches amid a pace that crushes wholly. “Desolation Insignia” is thrashy and meaty before it is blown to bits. The drums rattle, the growls decimate the throat, and the whole thing feels outright beastly. “Hate Nomad” has guitars spiraling out of control, dizzying and disorienting right before the blades arrive. The vocals are a mix of growls and grunts, while the bulk of this thing is numbing. “ETHR (Failure Erased)” is 1:26 of smearing violence, an animalistic display of aggression that’s terrifying and oddly sobering. Closer “Nihilist Militant (Total Rejection)” is savage and blood-thirsty right away, mauling with a purpose and eventually dragging you into a strange noise haze. Out of that, feral grunts arrive, the drums are beaten without mercy, and passages where the band drags you through tar make the journey feel that much more painful. As the track reaches its end, the growls sound warped, and the band pounds away until consciousness slowly fades away.

Revenge are not easy to digest, and many times it feels like you’re under a constant assault on “Behold.Total.Rejection.” Likely, that’s exactly what the band had in mind, as they did their best to put the feeling of bloodshed into song. They remain one of the deadliest bands in the world, their intensity is at frothing-at-the-mouth levels, and it’s clear the only thing on their mind is total and complete vengeance.

For more on the band, go here: https://www.facebook.com/RevengeofficialSoMpage