When I was a kid, I was obsessed with the idea of where ones goes when one dies. Being brought up Catholic, I was told of heaven and hell and all of that, but for some reason, my mind always wandered further than that. I always imagined what it would be like to be a soul floating through space for all of eternity. I guess I still kind of think about that.

Finnish metal sprawlers Oranssi Pazuzu apparently had some of those same ideas in mind when creating their new record “Värähtelijä.” This fourth LP from the band, their first since 2013’s world-toppling “Valonielu,” takes the band’s psychedelic black visions even further, pushing them into galaxies well past our own, where we can see stars and visions we never have before. Of course, that experience will take place in your mind, where anything is possible, so no matter where you travel on this seven-track, 70-minute record, it’s sure to be an experience like no other you’ve had before. 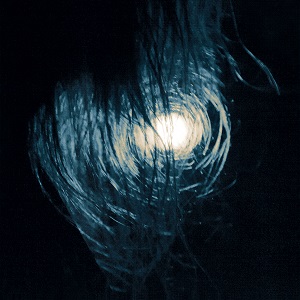 Oranssi Pazuzu have been haunting minds for nearly a decade now, having carved out four full-length efforts in that time and become one of the most forward-thinking bands in all of metal. Its members–guitarist/vocalist Jun-His, guitarist Moit, bassist Ontto, keyboard/organ/effects master Evill, drummer Korjak–really work past just the black metal spectrum here, pulling in doom, Krautrock, heavy psychedelics, and elements of post-rock. It’s not that these shades weren’t a part of the band’s music before. It’s just that they have a heavier hand here and really make this a fascinating piece of work. It’s really impressive and immersive hearing how they mix so many parts together to come up with something so well blended and riveting.

Our journey begins on “Saturaatio” that spreads mesmerizing weirdness across the universe before it starts to unleash its psychedelic strangeness. Over the 11:58 running time, cosmic blasts tear open places for lights to shine through, and the creaky growling swells behind, as organs spill down and the guitars go into trippy atmosphere. Later the song gets grittier, as it twists and prods, calms into a circle of drumming, and lets swirling stardust take it to its end. “Lahja” keeps the mind trip going over the bustling drums and the entrancing melodies. As the hypnosis builds, growls stretch and bubble, and deranged guitars mix into everything, keeping the pattern moving and circling, which might lead you toward a thousand-yard stare. “Värähtelijä” is intoxicating from the start, with the vocals humming, the elements building, and the track feeling like it’s swimming through a dream. The growls bubble under the surface, while the guitars begin snaking through the piece, and the tempo again mystifies. There is some torment and tangling as the song winds to a close, and it swirls through the sky and into “Hypnotisoitu viharukous.” That cut lets off steam, while it gets more raucous as it goes speeding up and colliding into howled vocals and keys that zap all over the place. Wild cries are belted out, with codeine syrup-drizzled guitars making you numb and settling you into the temporary calm. From there, a final eruption strikes, while sounds woosh and pummel, and the track slowly dissipates.

“Vasemman käden hierarkia” is the longest cut here at 17:39, and it starts off amid sci-fi bubbles hazy guitars, and shimmering psyche thunder. Weird, spacey synth swings in, with noises shooting like lasers, keys blaring, and black metal-style guitars adding a level of darkness to it all. The track then explodes, with a rage ripping through the piece before an extended section with the band unloading alien transmissions. Vocals later lurch in again, as the track plays with tempos, shrieks dash your body, and the piece ends in a pit of fire and corrosion. “Havuluu” has a playful, jazzy start, as the song plods along and jangles. Growls merge into the track, while guitars dizzy and drive the strange pace, and a pocket of chants arrive and chill the flesh. The track then goes on a mind warp, with the growls creating havoc and spiraling melodies putting a cap on everything. Closer “Valveavaruus” runs 10:38 and starts in a noise swarm. We head down a claustrophobic, galactic path, as the vocals warble over top, and it all merges into a dose of serenity. Surfy guitars situate themselves and tease your mind, while ominous clouds emerge and completely enrapture. In the final moments, the keys are pumped and stymie, all of the noises pulsate, and the track heads back to weird worlds to haunt other inhabitants.

Oranssi Pazuzu continue to morph from their original state and push boundaries, and because of that, they’re one of the most interesting and exciting bands in metal. They may use the cosmos as a base, but they never float anywhere too long, as there is an entire universe for them to explore. “Värähtelijä” is an adventurous triumph for the band, a challenge to the rest of the metal to get on their level. If they dare try.

For more on the band, go here: http://www.oranssipazuzu.com/