When it comes to conveying misery and darkness, we tend to lean toward heavier, nastier sounds in which to immerse ourselves. At least we do here on this site. But that’s not always the case, as sometimes a band can deal in more delicate sounds, yet still leave you a heaving, inconsolable mess once their records come to an end.

That’s definitely the case with Bay Area-based trio Worm Ouroboros, who have spread their shadowy, haunting presence over three full-length records now, their latest being the entrancing “What Graceless Dawn,” as powerful and riveting a late-year record as you’re going to find. Over the entire body of work, the band has created music that’s impossible to pinpoint. While not metal through and through, there’s an emotional and psychological heaviness, but intermingled with that are elements of folk, chamber music, ambiance, and death rock. Yet, as I say that heaviness isn’t their primary trait, this is the band’s weightiest record so far. Some of the guitars churn a little harder, the drums chew up the space a little more forcefully, and there are times when you’re ready for the world to begin gushing blood. And sometimes, it does. 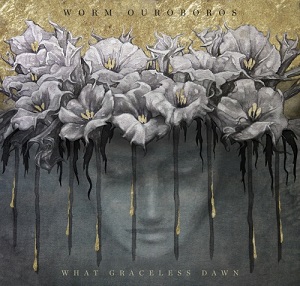 Worm Ouroboros are just a year away from their 10-year anniversary as a band, and their initial, self-titled debut came out two years after the formed. That record proved that this group had something a little different to add to heavier music, and that promise truly paid off with 2012’s excellent “Come the Thaw.” The band—bassist/vocalist Lorraine Rath, guitarist/vocalist Jessica Way, drummer Aesop Dekker—explores deeper realms of sadness and tragedy on “What Graceless Dawn,” a record that can pull you under the murky waters, force you confront visions of sadness you might not have imagined before, and bring you back to surface a forever-changed person. Get ready to wallow along with them in the doomy, grimy underground.

This six-track, 68-minute record opens, quite fittingly, with “Day,” as the ghostly pace meets with hovering noise, and Way and Rath’s voices begin to mix together, like they do on the whole record. “The sun rises in the east, clothed in robes of blood,” is whispered ominously, as the whole song opens, with a mournful gaze erupting, and the song flowing out into the distance. “Broken Monuments” has singing breaking the surface and moody sounds rising with it. The track plods along in the shadows, as it feels like an old, lost soul is rowing you along through foggy, vine-filled tributaries. Guitars later swell, with melodies spilling down, the darkness dragging its shadows, and a jazzy feel emerging, as the cut gently slithers away. “Suffering Tree” has naked singing and the music trickling in, as a spiritual essence spreads itself and helps the song flow serenely. Rath’s and Way’s voices intertwine like serpents around a tree, while the guitars drag thorns, charge up, and disappears into the mist.

“Ribbon of Shadow” is the longest track at 13:48, as it slowly awakens, quietly breaking its strings and unfurling itself. The drama here is built beautifully, with the singing rising above the murk, and the tempo later getting tougher. Guitars unleash their power, as noises sting, the melodies arrive in waves, and the cut disappears into a cloud. “(Was It) The Cruelest Thing” has hushed vocals and choral winds, staying foggy and calm for a stretch before the volume begins to build. The music here challenges you and refuses to let you off the hook, and even when the tide recedes, you’re still looking at unsettling waters that could swallow you at any time. Just like its beginning, singing dashes over the final minutes, with sounds bubbling up toward the end, and the drums striking away at your ribs. Closer “Night” runs 10:41, with whispers inviting you into the opening, and the track taking on a mystical flow. The playing has a dreamy feel overall, with the voices swirling around your head and the guitars charging up to spit some fire. The song keeps folding and bending, like a hidden forest path, and once the colors begin to mute, everything dissolves into a hazy pocket of sound.

It’s always easy for us to say “this is the band’s best work to date” when it’s still fresh and exciting in one’s mind, but after multiple visits with this record, that feeling has only grown. Worm Ouroboros are at their most visceral and emotional on “What Graceless Dawn,” and the music is bound to grab your heart and significantly impact you. The band’s never going to compete on a decibel level with most metal bands, but they’re as dark, impactful, and misery-inducing as any artists out there.

For more on the band, go here: https://www.facebook.com/WormOuroboros