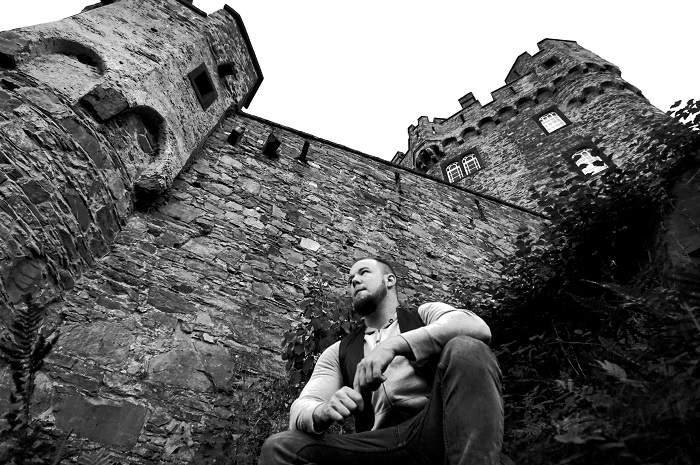 Artists that can make music feel like it jettisoned through a time warp and ended up in the modern era always intrigue me. Being able to capture an essence from a time that’s gone on and translating it into sound can’t be easy, but those who can pull it off (I’m thinking a band such as Obsequiae) tend to be really special ones.

Long-running German black metal project Horn is another of those acts, and over the course of 15 years, the band led by sole member Nerrath (Cross Vault, Shrine, Latitude Egress) has dug back into history and lore and come up with another compelling slab called “Turm am Hang,” the seventh record from this band overall. Focusing on myriad topics such as 17th century German folk song “Es ist ein Schnitter” (a poem that addresses the Reaper); lansquenets (15th and 16th century colorful German mercenary soldiers); wars of the past; tribalism; and the spirit of masculinity, and all that bleeds through on these eight cuts (well, nine, but one is a cover). Perhaps that’s part of what makes this music feel like it comes from another era. It doesn’t have a purposely vintage production nor does it try to seem from a bygone time. It simply achieves that time travel seamlessly and makes these songs interesting and exciting.

This new Horn album, the first since 2015’s killer “Feldpost,” is heavy, raucous, and melodic. In fact, it does sound a lot like “Feldpost,” or at least where Nerrath was coming from at that time, and it’s such a great, spirited listen. The album itself is such a mighty release that it is taking two labels—Northern Silence and Iron Bonehead—to give it the proper treatment it deserves. It’s destructive and spirited, a great slab of heavy metal and blackened drama that continues to unload with power that could help remind you why you fell in love with this style of music to begin with.

“Alles in einem Schnitt” starts the album with strings striking and the song blasting forward. Melodic guitar work and an undeniable catchiness sweeps over, while harsh barks mix with clean singing (something that repeats often on this album) and takes the song to its end. The title cut has a Primordial vibe at the start, with cleaner guitars sounding majestic and gigantic. The song breaks open, with grisly growls and bellowing singing (especially on the chorus), as the guitars get ready for another attack. A rousing singalong section breaks out, and that energy stands until the song fades away. “Verhallend in Landstrichen” begins with doom horns that sound like they came from an old black-and-white film, and then it’s into a rushing dose of punishment. Strong growls combine with thunder-and-lightning riffs, rolling heavily over everything and capturing whatever’s in its wake. The song rounds out with militaristic drumming and a strong sense of adventure. “Die mit dem Bogen auf dem Kreuz” is clean and murky to start, with strong calls of “oh-oh!” and waves of energy pushing. The music, like most of the record, is heavy and catchy before things end abruptly.

“Ä(h)renschnitter” unleashes dirty guitars and gravelly singing, as the pace ruptures and makes the earth quake, and the song suddenly hits the gas pedal. That bursts through the gates and sprays shrapnel, while the chorus feels rowdy as hell and the guitars raise their swords. “Totenräumer” erupts right away though it teases to go serene just moments into the track. Bells start to ring, seemingly signaling a battle will start, while unmistakable energy bleeds through, and fiery riffs lead the song to a smashing end. “Lanz und Spieß” is a quick interlude, with strange, psychedelic-filled guitars drizzling strange colors, and then it’s onto “Bastion, im Seegang Tauber Fels” and its classic metal start. The growls are gruff, and the lead guitars stoke the fires, carrying the song onto its boisterous assault. There’s a great sense of a journey with this one, as it should excite you and possibly want to follow along the same muddy path behind it. The album ends with a cover of When Bitter Spring Sleeps’ “The Sky Has Not Always Been This Way,” the only song sung in English, and a really cool take on the track from 2013’s “Coven of the Wolves.” It adds a nice touch to the back end of the record and gives you something a little different from what burned you over the first eight songs.

Horn’s accomplishments the past decade and a half are to be celebrated, and “Turm am Hang” is another spectacular chapter for Nerrath and his dusty storybook creations. The music is powerful and catchy, and it might have you going back into history to learn more about what’s going on here. If you’re just here for the music, then you’ll get a heaping serving of metal full of Medieval power and glory, with you practically feeling the foot soldiers approaching and taking aim at you.

For more on the band, go here: https://www.facebook.com/HornOfficial/

For more on the label, go here: http://www.ironbonehead.de/