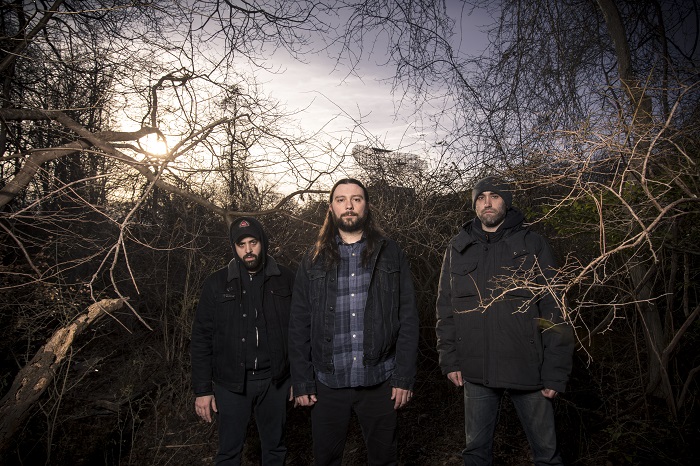 The return was announced without much fanfare, on a social media post declaring the band was back together, and new music was forthcoming. If you’re not following every band everywhere, it’s easy to miss such news, especially since most outlets also seemed to miss it. I found out due to work I do for another publication when, there it was, sitting on a list of records that needed a reviewer.

I jumped at the chance to write up “Stalking the Ghost,” the sixth record from NYC-based doom unit Unearthly Trance, the band’s first since issuing “V” seven years ago and disbanding a little bit afterward. The band has become one of the most important underground doom units of the past few decades, and one of the nosiest, most vicious of any sub-genre. Their music was an unforgiving pit of madness, a grimy and filth-caked wasteland that scraped the bottom of society’s bucket and spread it all over their vitriolic music. To have them back in our worlds, especially since doom has produced so many bands since they faded, is vital. They prove on “Stalking” that their blood thirst remains, and each moment of this eight-track mauler offers unforgiving violence that hits just as hard with every listen. 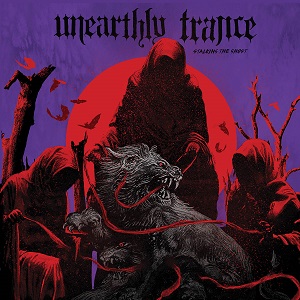 Unearthly Trance have been creating their terror since the turn of the century, stewing brains and guts with their sound and releasing relentless, crushing music. Their debut record “Season of Séance, Science of Silence” landed in 2003, and from there they’ve steamrolled the landscape, paying no mind to anyone standing in front of them. The band—guitarist/vocalist Ryan Lipynsky, bassist Jay Newman, drummer Darren Verni—continued to play their dark arts right up until they dissolved in 2012. Oddly, only this band dissolved, as the three kept playing music together in similar-styled Serpentine Path with Tim Bagshaw (ex-Electric Wizard, currently of With the Dead), and Lipynsky also resurrected Thralldom. But this is where all three seem most at home, and “Stalking” plays that out.

The record starts with “Into the Spiral,” where heavy drubbing and gnarly growling mix together and create a hulking force. Later, some clean singing enters the fray. But that’s a brief deviation before we are back into the muck as the guitars sizzle, and the end is abrupt. “Dream State Arsenal” has one of the nastiest riffs on the record, and we have plenty of them. Through that, the noise bakes, the music weighs down, and Lipynsky wails, “Death is but a dream!” The howls then turn to shrieks before the song bleeds away. “Scythe” has misery-inducing start-stop playing, with the band dropping hammers over the chorus. The song is utter demolition, with psyche-drenched leads gushing, and the vocals sounding gut wrenching. “Famine” is dark and thrashing, feeling morbid and a bit solemn. The vocals drown in chaos, while riffs pull everything together, and Lipynsky growls, “When will the walls come down?” almost as if he’s inviting Armageddon.

“Lion Strength” is aptly named and really could have been a fitting album title. The guitars boil, and the vocals roar, with Lipynsky urging, “Listen to the voice of fire.” Trancey guitars bubble, while the song snakes along its path and continually sneaks up on you when you least suspect it. Ominous whispering chills your blood, while the back end of the song rips open and tears out your guts. “Invisible Butchery” is defaced with noise, as the pace scrapes along, and the vocals sound like they’re primed for death metal. The track smothers and collapses your chest, with the final minutes bringing torment. “The Great Cauldron” is the longest piece at 9:01, with calculating riffing, a genuflection at the altar of Sabbath, and gurgly growls that sound delivered through a throat coated with blood. The entire run of this song takes its time delivering bruising, leaving you a sore, heaving mess once the final guitar assault launches and leaves you numb. Closer “In the Forest’s Keep” has an eerie clean start, instantly pushing you into the shadows. That coldness remains, lurking and inviting the rains to soak the ground, with a sound storm arriving about halfway through, and morose dialog stretching through to the final moments, where the track takes its final resting place.

Unearthly Trance certainly have been missed because no matter how many doom bands pop up, these guys remain the masters. “Stalking the Ghost” not only is a fitting follow-up to “V,” it’s a vicious next step in the band’s journey and a reminder of what they’re capable of doing. The renewal of this band’s mission should enthrall their followers and put all the rest of the metal world on warning.

For more on the band, go here: https://www.facebook.com/UnearthlyTrance

For more on the label, go here: http://store.relapse.com/