The world may or may not be screwed. Unless you’re living in a delusional fairytale—and some of you are!—the state of society, at least here in America, never has been worse. We’re a ship whose captain is vomiting in a can because he can’t handle what he’s taken on, and the rest of the world likely is looking on in pity. Or hoping to strike.

“For Doom the Bell Tolls,” the second full-length from Irish triumvirate Dread Sovereign, is coming to us at a time when we probably need it the most. A lot of us are worried about where things are going in this country and in the rest of the world, and having this six-cut platter from which to feast likely won’t make many people feel better. But sometimes looking madness in the eye has a way of strengthening, and this music could provide the life callous we need to deal with the blows of insanity and inanity that aren’t about to stop any time soon. The band—vocalist/bassist Alan “AA Nemtheanga” Averill (Primordial, Twilight of the Gods), guitarist Bones (Wizards of Firetop Mountain), drummer Johnny King (Malthusian, Krawwl, ex-Altar of Plagues)—pays heavy homage to classic doom on this effort, but they also splash it with modernity and a deep sense of fear and loathing to keep your stomach churning. 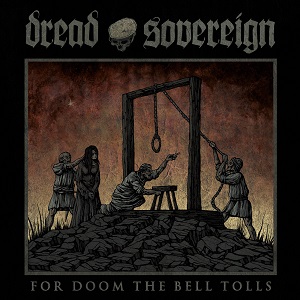 The title track opens the proceedings, an intro-style cut that mixes bells chiming, whipping winds, and eerie noise that pushes into “Twelve Bells Toll in Salem,” a 13-minute cut that reeks of classic doom stench. The track slowly crawls and piles up bodies, with Nemtheanga belting, “I am the dread sovereign, so take these words!” As the song continues its morbid march, Nemtheanga wails, “Let my death not be in vain,” as an emotional solo tears open the sky, and the bells return to signal the dark curtain dropping. “The World Is Doomed” is heavy and driving, with Nemtheanga accusing, “So many want to watch the world burn.” The guitar work lathers with ill intent, pulling the song into a calmer section where the waves recede, only to drag you back out to sea before you know what hit you.

“Draped in Sepulchral Fog” is an interlude track with a swarm of sounds and strange blackness, leading toward “The Spines of Saturn,” the second-longest cut at 7:56. The ambiance of this one is pretty strange, as the vocals are washed out by fog, and the tempo sits at a light boil while letting off steam. Synth arrives like a noxious smoke, as the song suddenly heads toward planetary exploration. A deep ’70s doom metal aura rises and intoxicates, while the final minute of the song fully commits to its outer space journey from which it’ll never return. The band closes out this offering with a fun, noisy cover of Venom’s “Live Like an Angel, Die Like a Devil,” a selection that seems at odds with the musical vibe set here but it satisfying nonetheless. It’s a loose, raucous end to a record that grinds your face in turmoil and murk, with no mercy on its agenda.

Thing are just going to get uglier, and having hope that we’re going to wake up to a sunrise the rest of the year is not exactly a given. Dread Sovereign are not here to soothe you. Rather, with “For Doom the Bell Tolls” only should exacerbate your fears and ramp up your anxiety that any breath can be your last. So grab onto the darkness while you still can.

For more on the band, go here: https://www.facebook.com/DreadSovereign