I have weird nightmares sometimes about being wedged in a pipe underground. I can’t move, breathing is at a premium, and it feels like my chest is going to cave in. Even though the entire scenario is in my head, I swear it often feels like there is the weight of the world on my chest, like I’m literally being squeezed to death in my cylinder grave.

I got a similar feeling when taking on “To the Concrete Drifts,” the first full-length effort from Michigan quartet Fell Ruin. I guess that might not sound like a compliment at first, but it very much is. The crushing, oppressive nature of this band’s music is absolutely devastating, and while their work makes me think of the most uncomfortable physical state I can imagine, I don’t demand comfort from metal. So, this completely works. These five tracks are fairly tough to describe simply by assigning sub-genre tags, but there’s a ton of doom, some black metal, some death, and an entire bundle of torture packed into this record. The band—vocalist Brian Sheehan, guitarist Robert Radtke, bassist Jeff McMullen, drummer August Krueger—barrels into you over the bulk of this record, and when these 37 minutes expire, you will feel like you were in a five-round battle inside a cage with an unforgiving barbarian. 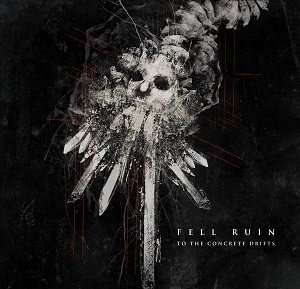 “Respire” is a brief introductory track, and a misleading one at that. Here, you’re immersed in quiet, trickling guitars and an atmosphere that feels like a warm embrace before you have your head chewed off on “The Lucid Shell.” There, smudgy punishment and wrenching growls grab your guts from the outside and try to pull them through your skin. Weird buzzing leads into calmer, cleaner guitars, but that, too, is a trick, as the band tears the bottom out and openly mauls you. Vicious, muddy playing aligns with deathrock-like coolness, while the growls contort and confound, and the track heads toward a fiery grave. “Spy Fiction Holds in Steady Streets” has a clean yet jarring start, with sludgy thrashing blowing into the scene, and the track suddenly hitting the gas pedal. Things jerk into a section that hints heavily at Sabbath worship, while the track leaves trails of ash. Sounds start to blur together, hinting at psychosis, while a heavy cloud of noises drags the song into the dead of the night.

“To Wither the Golden Rose in Bloom” has a drunken pace to start, staggering dangerously as if it could topple at any moment. The vocals buzz like a deranged insect, while the pace shifts all over, pulling in quaking doom and drubbing fury. The track grinds slowly but is heavy as fuck, with lurching growls, mesmerizing playing, and bleeding, ringing tones causing mental damage. Closer “…And Choke on Nocturnal Breath” is the longest track at 10:05, starting with abrasive black metal-style riffs and vicious cries. The doom then is poured like a thick layer of boiling tar, while the guitars go off and scorch the earth of all of its goodness. As the song stretches, there is a weird warmth that rushes to the surface, as the band heads in a tricky, proggy direction you won’t see coming. Finally, the band declares war one more time, letting their assault rip skin and bone, as the punishment ripples away.

Fell Ruin’s first full foray into the metal world is a crushing, promising one. They have a nice hold on what they do well on “To the Concrete Drifts,” and over time, they’re only bound to get deadlier. The pain you feel once this thing had its way with you will stay with you but also will damage and callous your muscles so that you’re more able to deal with the crumbling world around us all.

For more on the band, go here: https://www.facebook.com/FELLRUIN