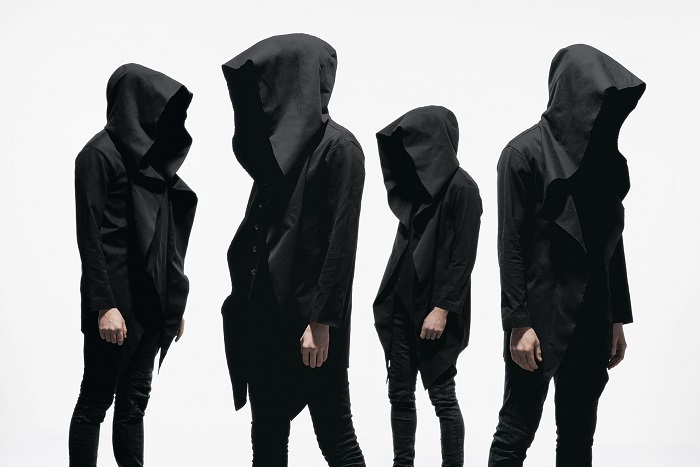 It can be difficult to write these opening paragraphs when you don’t have a ton of information about the band you’re featuring nor the philosophical content behind the music that’s your focus. That doesn’t really matter all the time, especially if the music is engrossing, which today’s selection is.

Lithuanian post-black metal band Au-Dessus (that means “above”) is delivering their first full-length effort “End of Chapter,” which is an interesting title for a group’s initial outing. The record also starts with a track called “VI” and ends on “XII,” but that’s because the band’s musical story began with a self-titled mini record that was served up in 2015. That’s about all we have. This band is another shrouded bunch that operates in the shadows, and even their bio on their Facebook page is cloudy and confusing, leaving mostly everything to the imagination. Nonetheless, it’s not like we’re at a loss of content, because the music is meaty as fuck. The vocals are terrifying and the music is both pummeling and atmospheric. The band—vocalist/bassist Mantas, guitarists Simonas and Jokūbas, drummer Šarūnas—isn’t employing a new formula or anything, but their execution is strong, and this first record is one to pay your attention. 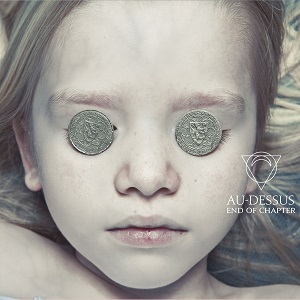 “V” starts the album, as noted, as vocals drone and the music cracks out from the sky. Harsh wails erupt as the music starts to crush, with a wrenching sense to the tempo and the music cascading. Clean singing joins the fray afterward, as it caps off this emotional onslaught. “VII” has guitars stinging as Mantas’ growls twist away at your guts. The storm then comes crashing to the ground, bringing with it a massive dose of power, strong black melodies, and wild screams that bring this track to an end. “VIII” is awash in murky chaos when it kicks off, as the vocals go from strangled growls to piercing shrieks. Guitars reign as the riffs charge heavily, and engorged growls then bleed toward a few moments of light. Guitars spiral as the shrieks peel the paint off the walls, with everything landing as ash after the fiery finish. “IX” is damaged and destructive as it starts, with the track ripped apart, and the chunky playing leaving bruises. Weird drone wails as the temp slows and mashes, with noise hanging like a cloud, and the final minutes wreaking havoc.

“X” is the longest cut at 9:39, as it trickles open to start before becoming completely engulfed. The vocals scrape while the band leans into soaring melodies, but later things get kind of gory. Muddy death chokes up the gears, delivering pain and misery, and then everything halts. Slowly the track reopens, with a long, spiraling section of guitars causing hypnosis and carrying all the way to the end. “XI” is weird and disorienting, with rubbery guitar work and gurgled growls. The band then launches a dizzying display, with the track getting thick and violent and then speeding up dangerously. The music keeps flooding, soaking the ground before turning into closer “XII.” There, Mantas’ cries agitate as the tempo throws stiff punches before things get tricky. Crazed howls and a pace that goes from frenzied chaos to clobbering trudging crushes, while the music boils and lets off steam. The final minutes are a combination of mauling and emotive, bringing the record to a scorching finish.

Au-Dessus have a mysterious essence and a strong approach to their art on “End of Chapter.” Their music is sweltering and full of different colors, and this is bound to be an album that reveals more of itself with each listen. Part of the tale might be ending with this first record, but as far as the band’s story, it’s really just begun.

For more on the band, go here: https://www.facebook.com/audessusabove/

For more on the label, go here: http://www.lesacteursdelombre.net/productions/v2/