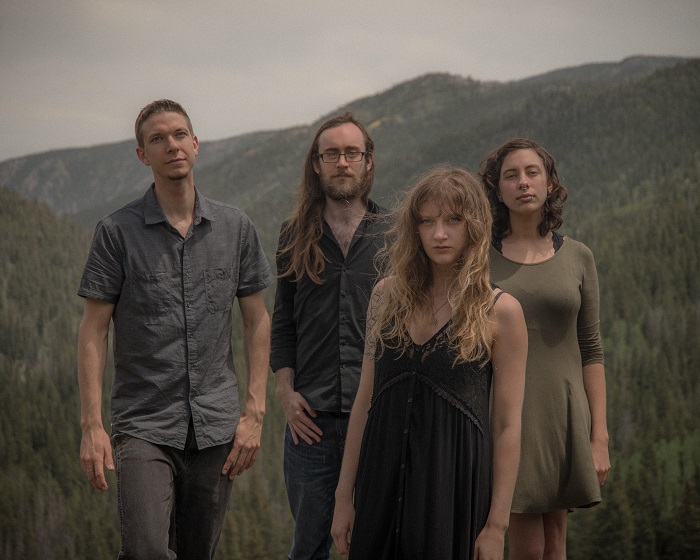 The way metal is presented has been growing for years, often to the moans and wails of those who would see it remain static. But like any form of art that has any hope of surviving, there must be evolution, new ideas, and means of expressions we haven’t seen before. If we don’t, it dies.

That’s why we all should be thankful for bands such as Colorado’s Dreadnought. Their approach to metal is difficult to explain and likely won’t be embraced by meat-headed war bros who still haven’t figured out how to operate within society (or outside of their parents’ basements). Their music has elements of Wolves in the Throne Room and FALSE, but also Queen, Kate Bush, and even indie rock band Eisley (who I’ve listened to a lot the last decade). They have sharp metallic elements, but they also add plenty of theatrics and progressive waves that could lure a Yes fan. Here on their third record “A Wake in Sacred Waves,” the band members turn their heads toward another earthly element, this time water, on this four-track collection, as they imagine the life cycle of a sea monster that rises to dominant status only to fade as life disappears forever. Here, you have sonic adventures and not just songs. The band—Kelly Schilling (clean and harsh vocals, guitar, flute), Lauren Vieira (keys, clean vocals), Jordan Clancy (drums, saxophone), and Kevin Handlon (bass, mandolin, lyrics)—pours so many different sounds and curves into these songs, that taking just one listen won’t allow you to absorb it all. Every visit unravels new layers, letting you experience this in full.

“Vacant Sea” begins the tale, and it’s a 17:22 epic that is the longest song on the record. We begin a capella, as Schilling opens the story, and then each member joins gradually, bringing a giant epicness. Pianos drip before the song tears open, and the first demonic growls are unleashed. Behind that savagery is a prog weirdness that is infectious, and from there, the pace rises and falls, threatens and soothes. Psyche-drenched synth floats through the air, while Schilling calls, “I lie in wait!” The music gets tricky again before hard shrieks rips open flesh, the leads burn, and serenity returns as flutes carry us away. “Within Chanting Waters” has a burly first few moments, with singing stretching over top, and the drums bustling. The guitars create a haze as the pace picks up, and the vocals scrape along the ground, leaving flesh. A trance-inducing section rolls in, while sax and flute align and add a New Age feel, and keys join to increase the hypnosis. Gut-wrenching shrieks are leveled, as the song gets loud and more urgent, but in the final minutes, keys trickle, and serenity floats away.

“Luminous Scale” is the shortest track, still running a robust 10:33. The song bubbles up, heading toward the arms of tranquility, before guitars catch fire, and we’re right back into explosive territory. The singing is forceful and compelling as Schilling observes something “teeming with aggression” before she lets growls rip out. Again, we battle light and dark, as the vocals are a vicious snarl in spots, but then we have lush harmonizing between Schilling and Vieira before the song drifts into the water. Closer “A Drifting Reign” ruptures like a rain storm, as keys and a progressive push move forward. The singing floats while the music brims with emotion, and a period of lush vocals heads right into a caterwaul that gushes with power. That energy sinks into drama and melody, as both Schilling and Vieira meld together vocally, and the track heads into shadowy coldness. Gargantuan shrieks punish, the keys bring showers, the elements cascade, and the song disappears into a capella singing, the same way the record began.

Dreadnought is one of the bands redefining how we think of metal, and “A Wake in Sacred Waves” is an exhilarating experience that grips from first moment to last. This is like listening to a bunch of seemingly different soundwaves coming together as one and making a cohesive whole. This band has been making inventive music for years, and it’s about time the rest of the metal world caught onto them.

For more on the band, go here: https://www.facebook.com/dreadnoughtband/

For more on the label, go here: https://www.sailorrecords.com/