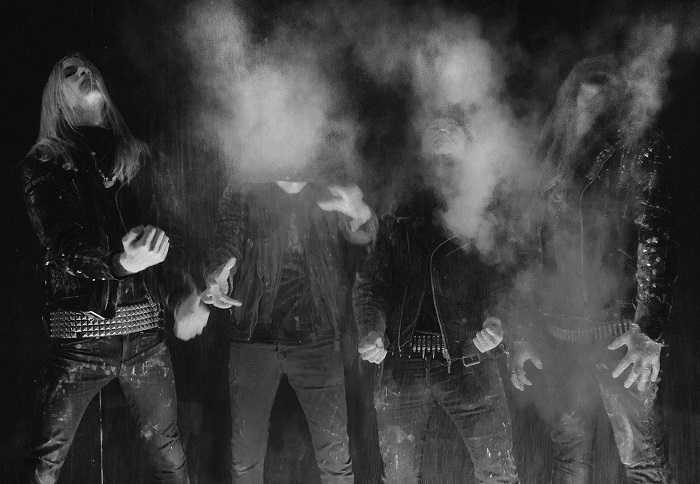 Grim skullduggery is something that should appeal to the bulk of this audience. Old-style death metal that sounds like it’s right from the depths of an artist’s tormented soul and heading out to sicken those who also have a penchant for hell isn’t a given in this world, as death metal has been heavily diluted. But if you look under the decaying branches and bloodied soil, you still can find the good stuff.

In fact, if that forest in which you’re pillaging is found in Finland, you might run into Obscure Burial, a band that’s been sickening hearts for nearly six years now (their debut demo “God Abomination” landed in 2012). Their debut self-titled long-player finally is in our hands, and it’s chock-full of good, righteous death metal that sounds like it emanated from a crypt and, ghoul-like, entered in your headspace. Over eight tracks and about 37 minutes, the band delivers a perfectly sized portion to feed those of us hungry for death metal that’s ugly, raw, and prepared to set fires wherever their hearts desire. The quartet—guitarist/vocalist L.K., guitarist M.H., bassist R.A. (who is the newest member, having joined last year), and drummer K.S.—smear us with soot and plasma, giving us a glimpse into a morbid future where this band helps lead death metal back into the tombs. 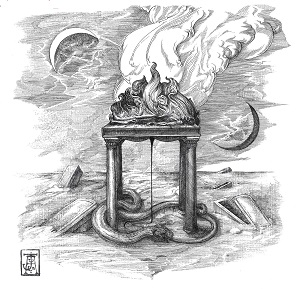 “Lucilia Silvarum” opens the record with strange noises before stomping death comes looking for you, and grim growls make your flesh crawl. The guitars spiral and confound, before Slayer-like soloing tears open, the speed kills, and the track comes to a devastating end. “Imago Mortis” thrashes away heavily, while the guitars are riffy as fuck, and strange melodies enter the fray. Nasty growls meet up with doomy incantations, and from there, the band starts to gallop. Growls hiss, the guitars scream away, and the track ends in total violence. “Darkness Spawns” is fast and ugly, with guitars sprawling, the tempo exploding into a fury, and a numbing pace dragging you toward massive chugging and dark shadows. “Transcending Deity” has a raw feel, while the vocals are cried yelps, and the tempo suddenly hits the gas pedal. The band mauls you hard over the course of the song, mashing the senses, before an exploratory solo shows there are brains behind the brawn.

“I Spoke to Darkness” has a warped start, with whispered growls inserting grit, while the song lurches through the mud and grime. The music sets fires and stampedes into a monstrous haze before hitting hyperdrive, blasting away, and taking bones and flesh with it. “Necrophagous Ritual” has strings echoing in the front end as noise wells, and then the song erupts. The growls are menacing and accusatory, as the guitars get hypnotic, yet catchy, and the final moments send you to blistering pain. “Dweller in the Abyss” pounds mercilessly as it starts, as the song rips open, and the brutality spills forth. The old school death metal feel is thick and chunky here, as the song flattens you, and raw wails splash over the chaos. Closer “Death of Eschaton” races forward, letting guitars call out, and the delivery bombard. The leads go off and burn, while the growls pelt your flesh, and then everything flows into slow-mucking madness. The band chugs away for one final push, as the track burns off its last energy.

Obscure Burial’s pungent death metal is massive and deadly on their self-titled first opus, and while only at their first step, their tools already are sharp. This group should warm the hearts of those who have dined at death’s table any time over the past three decades, as they are nourished from the genre’s roots. Add to that, this band is adding to Finland’s wealth of great, dark artists, doing that country and this entire genre a whole lot of bloody good.

For more on the label, go here: https://invictusproductions.net/