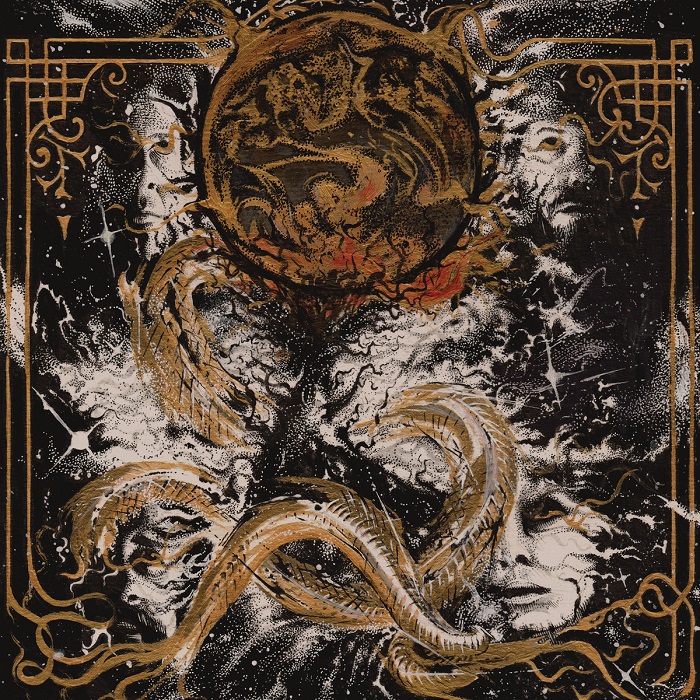 We live in a climate where religious oppression is climbing to a new apex. It’s unsettling to see the  … OK, let’s call it a government … jettison back in time to force Christian ideals on a country that is being divided over that (and many other things), and it seems like the people in charge would love to return to the time when rich white men, bastardizing faith, were all that mattered.

It’s bullshit to live under that thumb, but imagine the same thing following your every move since birth. King Woman vocalist Kristina Esfandiari lived under that oppression just growing up, trying to figure out what being a normal person is like, and that bleeds over onto the band’s amazing debut record “Created in the Image of Suffering.” The record is a result of years of religious and mental suffering endured by Esfandiari, and the result is a uniquely dark and emotional record that really stood alone among heavy music, especially those under the expansive doom umbrella. Musically, the band makes a major jump from 2014 EP “Doubt,” itself a great, gripping effort, as the content is heavier, moodier, sludgier, and more impactful. The rest of the group—guitarist Colin Gallagher, bassist Peter Arensdorf, and drummer Joey Raygoza—combines with Esfandiari to add more muscle to these songs, creating the perfect stage for the husky, pained vocals.

Utopia” has surprisingly sludgy riffs, oppressive heaviness, and vocals that tear at your soul. “Is this really happening?” Esfandiari wails as the music crusts over in the muck. “Deny” starts with spoken lines, but then Esfandiari’s singing takes on deeper tones while the guitars burn underneath the surface. The band unleashes its fury and begins pounding away, leaving noticeable welts, as Esfandiari scornfully laments, “You can’t even look at me, hide the shame that’s in your eyes.” “Hierophant” is the highlight of the record and arguably the emotional breaking point of the band’s catalog. The 8:01 track basically plays out in two parts, with the first finding a vulnerable, wanting Esfandiari admitting, “What I’m trying to say, I want to be the one you want,” as the song spirals like her heart, following her into desperation. As the second half unfolds, Esfandiari pays her devotion, vowing, “If you’re the sacred script, I am the hierophant.” Closer “Hem” is the ideal final landing, as the band builds stormy textures over its 8:07, starting ominously before building hypnotic layers, with Esfandiari admitting, “I’m reaching for hem” into a swirl of sound that will destroy your heart. It’s crushing someone had to endure such pain, even if it resulted in beautiful art. This whole record is a soul scorcher. (Feb. 24)

Arensdorf was kind enough to answer some of our questions about the record, their touring experiences supporting “Created…” and what the future holds for the band.

MEAT MEAD METAL: We are naming “Created in the Image of Suffering” as one of our top 5 favorite metal releases of the year. The album is much heavier and darker than “Doubt.” What brought about this progression in the band’s sound?

PETER ARENSDORF: First off, thanks so much! It’s been amazing to see how many people have loved the album this year. I think that in terms of the sound of CITIOS, we tried to channel our collective emotions in a succinct and impactful way. I wasn’t a part of making the “Doubt” EP but I know that in going into recording CITIOS we wanted the songs to not only be musically heavy but emotionally so as well. We also really wanted something that could easily translate to being played live.

MMM: The band live is a different experience than the record. It’s even more visceral and intense. Does this catharsis and bloodletting continue in the live setting? Or is it simply a performance that changes each night depending on mood and ambiance?

PA: Yeah, for me, the catharsis only intensifies in the live setting, but it’s always dynamic and based on innumerable factors. One night might be a channel for sadness/exhaustion, while another for anger or frustration, and I think that people that come and see us tap into their own emotions and their own releases via what they’re hearing. We see all sorts of reactions from up there.

MMM: Among others, “Hierophant” is an amazing song, one that feels like it is a battle between desire and willingness to give in. What inspired this song, and am I wrong to feel like this is sort of a devotional?

PA: This song actually came about at my first King Woman practice. I’d written the verse/chorus parts a while back, and when it finally worked out for me to come in and play with the other three, we were sitting on a break and I started playing it for everyone, and we all just jumped on it. We were kinda in crunch mode for writing the album at the time, and I think that we basically wrote the whole thing in a day (minus lyrics). Kristina could speak in more depth about the exact emotions around the song but, yeah it’s a love devotional.

MMM: Do the aspects of your music that tackle religion feel like they could be applicable to more people’s lives now, especially as the United States has this revived religious pressure in politics and societal matters?

PA: I’d like to think that, maybe, we offer an outlet for people feeling disenfranchised about certain aspects of the world.

MMM: On a lighter note, King Woman had some pretty extensive touring experiences in 2017. How did you feel about the band’s live shows this year? What were some highlights? What did you learn about your songs as people received them?

PA: Joey and I were just talking about this, and we’ve had such luck to play with so many good people this year.  Oathbreaker, JayeJayle, True Widow, Chelsea Wolfe, Uniform, Thou, Dreamdecay all amazing musicians and even better people. So many highlights. Richmond, VA, is always amazing to play, love that city. Also shout out to Alex at Charm School ice cream (http://www.charmschoolrva.com/) for always putting us up. It was our first Euro experience, so we had a great time over there. Berlin was a particularly good one. I feel like as the tours came and went, we continued to get more cohesive as a band, and I know that I learned a shit ton this year about how to make it all work with real life and work and relationships and all that.

MMM: What does King Woman have coming up in 2018? Too soon to think about new music?

PA: Right now we’re doing a lot of writing. You might have noticed that we played an unreleased song at a lot of our shows this year. That one will be on the next album, and we’re all just chipping away at ideas but also taking some time to breathe and rest. January of 2018, we play an amazing fest in Petaluma, CA., put on by Anthony Anzaldo from Ceremony, called Home Sick (https://www.facebook.com/events/306619423186599/). Other than that, you’ll just have to stay tuned and see.

For more on the band, go here: https://www.facebook.com/KNGWMN/