Metal doesn’t really get big anymore. Decades past, metal bands still cold play big sheds and arenas without compromising their sound. They simply kept building an audience on top of strong release after landmark record, and as they strengthened their resume, the crowd swelled with that. You saw that very thing happen with legendary acts including Metallica, Iron Maiden, Judas Priest, Slayer, and so on.

It’s about time that Colorado-based metal band Khemmis move up in the world and be recognized by more than just a larger underground audience for how good they really are. Their new record “Desolation,” their third, follows the same path those classic bands did by creating one awesome album after another, with this being the best thing they’ve done so far. You’ve heard that before. Fucking listen to it and find out. As they’ve gone on, they’ve also expanded their sound, as they can’t just be pigeonholed as a melodic doom band anymore. These guys—vocalist/guitarist Phil Pendergast, guitarist/vocalist Ben Hutcherson, bassist Daniel Beiers, and drummer Zach Coleman—also delve into classic heavy metal, NWOBHM, power metal, you name it, to create a more full-bodied, dynamic album that’s one of the best of the year. I have so many great memories as a kid of indulging in my countless metal tapes every warm summer day, and “Desolation” would have fit right alongside those classics that I still listen to now. 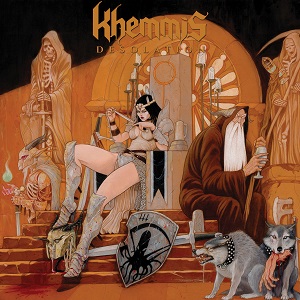 “Bloodletting” begins the record with solid riffs and tremendous singing from Pendergast, who is at the top of his game on this record. “The noose is gripping at my neck with every breath,” he wails, as a growled yelp takes us into a different progression before things kick back up, increasing the atmosphere. More growls emerge at the end, as the track goes out in flames. “Isolation” kicks in with killer guitar work, as Pendergast calls, “The endless days bleed into nights,” giving off the feeling of never-ending monotony. Luckily that sentiment doesn’t bleed into the music, which has a classic power metal feel the way it punches. There’s some grittiness, as the band trudges through mud, but before long, they lean into steely harmonies and smoking guitar work. “Flesh to Nothing” has a killer dual guitar assault, feeling like it flashed out of the late 1970s, and the deeper singing on the chorus and blunt growls add some muscle. Searing soloing flashes before your eyes, while the storm meets up with an acoustic outro that ends the song on a calming note.

“The Sear” brings more twin guitars that cause an early burst, but then we’re into a slower pace, though one no less heavy. Melodies cut through, while shrieked lines induce panic, and the guitars chug and stomp into the mist. The final minute is moodier but also glorious, as we end having punches thrown at us. “Maw of Time” has speedier riffs greeting you at the gate, while the growled shouts of, “Cast out!” cut into your skin. Gnarly howls mix with driving singing over the chorus, with Pendergast howling, “The sky is burning red,” amid the accumulation of smoke and ash. The heaviness never relents, as the band kicks up mud and mangled vocals before the track fades away. “From Ruin” closes the record, a 9:27-long song that runs the gamut of emotion and sound. “So here I rest, I’ve come undone,” Pendergast notes early on, while the band unloads the heaviest test of doom so far before things get darker and solemn. “There’s a fire set ablaze in my heart!” Pendergast declares, as the band hits an old-school gallop that brings a rush of nostalgia and sharp leads. “I find the strength to carry on,” Pendergast calls, as the band fires up one last blaze of glory before the track burns away.

Khemmis’ sound, songwriting, and power never have been as strong as they are on “Desolation,” and as great as “Absolution” and “Hunted” were before, this record puts the band on the next level. There’s serious crossover potential with this record, which is ideal considering how bad the mainstream metal picture is, and they deserve to be playing larger rooms that could handle their might. Khemmis is one of the great hopes for metal’s future, and the further they travel down their path, the more impressive and infectious this band becomes.

For more on the band, go here: https://www.facebook.com/khemmisdoom