This is a rare day around here, because we’re going to bask in positivity. With all of the vile and grotesque metal records we gleefully cover, combined with the cataclysmic state of the country and the world, it’s often a real downer in these parts. But not today, when we have so much to celebrate.

We almost never got a new YOB record, much less one as massive, cathartic, and healing as their eighth platter “Our Raw Heart.” Hell, we almost didn’t have Mike Scheidt, period. Likely most people know of his battle with diverticulitis and infections that nearly cost him his life last year, as it’s been a story widely told. The pain and near descent into the void would be enough to devastate most people for good, but not Scheidt, who often has stood as a beacon in a sea of murk with his messages that espouse love and inner strength and spirituality, along with ones that also navigate through darkness. The band and the man both survived, and taking on their new seven-track, 74-minute mammoth of an album is enough to fill one’s heart with goodness and happiness because one of metal’s finest institutions is alive, well, and rejuvenated. Along with bassist Aaron Rieseberg and drummer Travis Foster, guitarist/vocalist Scheidt crafted these new epics and added more grit, heart, and emotion than ever before, and while it’s quite the demanding listen, it’s one that’ll call you back over and over to hear the messages and continue to walk its path until you gain greater understanding. 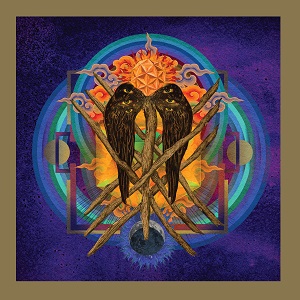 “Ablaze” is the 10:28 opener, and right away you can feel the emotion that permeates this entire record. Scheidt’s raspy singing comes in pretty shortly, feeling different and evolved, though later some growls bleed in. Later, the pace ruptures and sludges, as Scheidt’s growls rumble, and even after a brief period of calm, the music explodes again, ending in a heartfelt pyre. “The Screen” couldn’t be more different, as it’s one of the gnarliest, grimiest songs in their catalog. The guitars chew at muscle, with riffs that send gut punches, and Scheidt’s singing is blunt and coarse, wailing, “Ancestral rusted blade, broken hilt, deep thrust,” as it he’s experiencing that pain as he sings, which isn’t far off. The thick bass slithers like a black snake, while the band grinds away, with Scheidt demanding, “Rise! In this moment!” The track ends machine-like, with the guitars feeling like massive, oppressive gears. “In Reverie” begins quietly before ripping open and releasing summer heat. The track is slow driving and bludgeoning, with riffs burning, the singing smearing filth, and everything coming to a smothering conclusion.

“Lungs Reach” is the shortest cut at 5:39, and its eerie noise stretches and infects before the song tears open and reveals its monstrous side, eventually dissolving into a mud pit. “Beauty in Falling Leaves” is the longest track, weighing in at 16:49, and it’s the indisputable core of the record. It’s a wrenching doom ballad that ultimately has a positive, life-affirming theme, as the music slowly unfurls but builds into the crescendo of a chorus, where Scheidt belts, “Been this way throughout my life, your heart brings me home.” That sentiment keeps repeating, and every time it does, you can feel the blood rushing from the band’s collective heart, as they snake their way throughout this song. Later, the tempo switches, as they pour new colors into the mix, but they always return to the meat of the song, getting spacey and psychedelic before the track melts away. “Original Face” is the most traditionally YOB-like song on the entire record, with molten riffs, gruff vocals, and a heavy sentiment compounded by harsh shrieks. “There is nothing else, this is all there is,” Scheidt insists, as the punishing pace pushes on, the soloing scorches, and things come to a hellishly mauling finish. The title cut ends the album, a 14:41 epic that battles “Falling Leaves” for the emotional center point and does a hell of a job capturing your soul. The start is trippy and makes you see vibrant colors, and from there, the song takes you on a long journey that, weirdly, doesn’t feel like it lasts half as long as it does. There is emotional space, cosmic hurtling, and Scheidt calling, “Beckoning my restless ghost, leaving, nothing left behind.” The song feels like a total triumph, a statement from a band that started death in the face, survived, and lived to spread their positivity on an entirely new level.

YOB’s mission always has included a great dose of survival instinct, and that is partially what helped “Our Raw Heart” see the light of day to start with. It’s great to have Scheidt on the mend, sounding as vibrant and husky as ever, and the rest of the band pounding away like only they can. We can’t feel miserable all the time. This is a record that should put a smile on your face, light embers within your soul, and hammer home the point that even while we’re immersed in negativity elsewhere, it’s OK to stop and feel good every now and again.

For more on the band, go here: https://www.yobislove.com/

For more on the label, go here: http://www.relapse.com