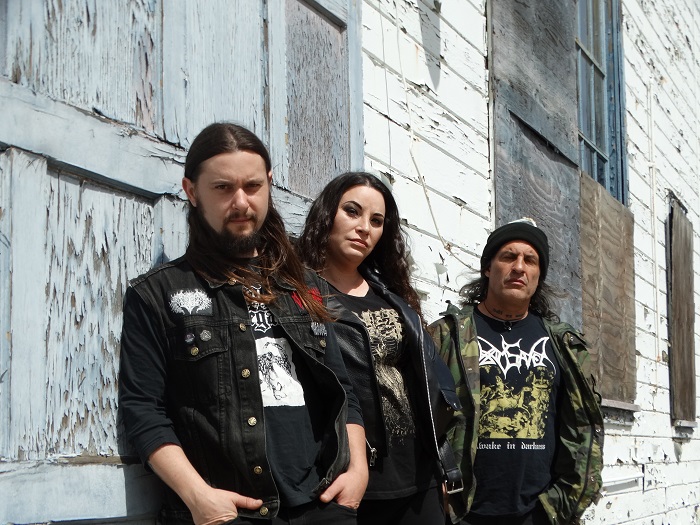 There is something great about blood-and-guts death metal that’s just here to devastate, test wills, and bring about the ugliest possible sounds one can muster. It doesn’t always happen that way anymore, as the borders of death’s kingdom expand musically and philosophically. But when a band can make it seem like you’re drinking from the early ’90s swamps, there’s something fun about that.

We were introduced Extremity last year on their appetizer “Extremely Fucking Dead” EP, an effort that was brought to you from metallic veterans who know a thing or a million about this type of thing. Now, a little more than a year later, we have their full-length debut “Coffin Birth,” a record that sounds like what its title implies. It’s ugly and violent, it’ll make you think of the vilest of horror movies you’ve ever absorbed, and it is, yes, extremely fucking death metal. The trio involved—guitarist/vocalist Marissa Martinez-Hoadley (Cretin), bassist/guitarist/vocalist Shelby Lermo (Vastum, Ulthar), drummer Aesop Dekker (Khôrada, Vhöl, and formerly of Agalloch)—wastes no time trying to be pretty or polished and instead soaks your head right into a sticky bucket of blood and innards on this eight-cut, 40-minute pounder that can act as a template to how this shit is done.

“Coffin Birth/A Million Witches” starts on an eerie note, as organs swell, old haunted house screams chill your blood, and then the demolition arrives, with guitars chewing toward your neck. Vicious growls punish, while the thrashy pace adds ample bruising, and a burst of speed strikes before the cut settles into filth. “Where Evil Dwells” has burly riffs and growls that hammer your fingers, as the tempo delivers punishment and decay. The bulk of this is grisly and mean, as the guitars chug and cut through to the song’s core. “Grave Mistake” has a properly ugly start, as twin guitars unite, and then they go right for the guts. Martinez-Hoadley and Lermo battle back and firth with their guttural growls, while the guitar work takes off later in the song, smothering you with a coat of ash. An angry-mob chorus riles dead minions before the song ends in a blaze. “Umbiculus” has a savage start, as the vocals are spat out, and the attitude is fast and nasty. Chewy riffs punch, while the track gets more aggressive, the growls are dually delivered, and everything ends viciously.

“For Want of a Nail” has warbled words at the start, coming in like a hazy nightmare, before the track kicks up and dumps particularly gross growling. Amid the sinewy guitars come flushes of acoustics, while the final minute ups the ante of pain, as weird voices echo, and things come to a massive finish. “Occision” erupts, as the verses speed past, stopping by for wrenching growls and total chaos. The leads blur and bleed, mixing violence with confusion, leading you face first into a bludgeoning. “Like Father Like Son” has strong riffs at the front end, meeting up with some mystical strangeness that arrives after the verses. The band slows it down at times, still delivering a hell of a beating, twisting and warping while you seek a modicum of mercy that never arrives. The record ends with “Misbegotten/Coffin Death” an ideal bookend with the opener. It opens acoustically, sounding like the start of a classic old ’80s thrash album, and then the power comes. It’s heavy and commanding, a track that feels like a battle cry, with a chorus that just rules. Martinez-Hoadley and Lermo again combine forces, and the song absolutely punishes. This is legit save-the-best-for-last territory, as this track slays, and this band is the old school death metal you didn’t realize you needed this badly. Oh, and the ending is fucking creepy and may keep you up at night.

Extremity’s well-traveled members sure as shit had nothing to prove to anyone, but that didn’t stop them from making “Coffin Birth,” a 15-round battle with death and horrors. The music is like taking a claw hammer to the back of the head and, perversely, really enjoying it. This record is a punishing display of death metal the way it’s meant to be played, which should be enough of a selling point alone.

For more on the band, go here: https://www.facebook.com/extremedeath