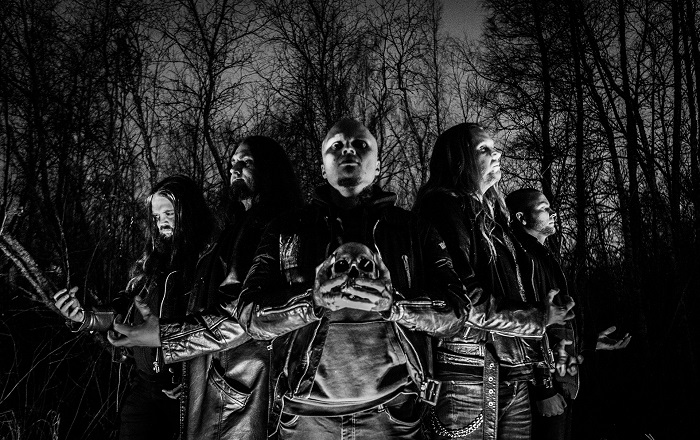 Death is all around us, a fact that is uncomfortably too much to handle sometimes. We see it on the news, we experience it when we lose loved ones, and one day all of us will have of own unsuccessful battle with the reaper. It is a fabric of our existence, even though it’s the thing that is going to be the unquestioned end of our cycle on Earth.

Finnish death crushers Corpsessed apparently have spent the past several years with that thought in mind, as it is the creative driver behind their long-awaited second record “Impetus of Death.” We hadn’t heard from the band in four years since their full-length debut “Abysmal Thresholds,” itself a relentless slab of death violence, and in that time, they’ve managed to become a more devastating, unflinching group of musicians that only have the worst of intentions as far as your psyche is concerned. On this new eight-track behemoth of an album, the band brings a hellacious beating that ravages your senses over a healthy 45:52. The band—Niko Matilainen (vocals), Matti Mäkelä (guitars, vocals), Jyri Lustig (guitars), Tuomas Kulmala (bass), and Jussi-Pekka Manner (drums)—approach the subject of death on two fronts: the idea that it is feared and the end of all, but also positively in that it gives your life meaning and you should push to accomplish what you must, because time is not infinite. 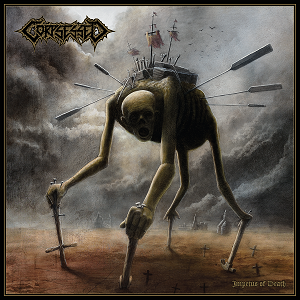 The title track kicks off this beast, as strange noises are afoot before guitars carve their paths, and the song gets into burly, muddy death. Matilainen’s growls rumble, while the pace gets ugly and torturous, with the soloing burning away at the surface and leaving toxic fumes. “Sortilege” also trudges in the muck, with a grinding fury gnawing away, growls sounding like they’re choking on oil, and the guitars bringing light to an otherwise dank territory. The riffs power, the growls lacerate, and it all comes to a smashing end. “Endless Planes of Dust” totally erupts, destroying and blinding, shaking the ground beneath you. The chaotic fury hits a doomy patch, while the leads glimmer, the growls gurgle, and the band puts on its submission finisher from which you can’t escape. “Graveborne” makes traveling impossible again, as the tires spin, and there’s no catching any footing. The drums unload, while the band serves up a bleeding, splattering assault, blistering and refusing to let up until the track comes to a guttural end.

“Paroxysmal” has gross growls, warped guitars going unhinged, and terror bells ringing out, bringing with them a funereal essence. Riffs encircle while the pace picks up, as the guitars gash the skin, and heavy growls punish right to the bitter end. “Forlorn Burial,” which is a great song name, burns slowly, while the guitars simmer and the growls mar. The pace isn’t as fast, but it’s just as heavy as anything else on here, smashing forward, bringing dizzying guitars, and unleashing hell before it sprawls away. “Begetter of Doom” sits in a sound scape at first before the track gets thrashy, and the band brings annihilation. Growls and shrieks mix to form a deadly tandem, while the playing does deep psychological scarring, and the track boils away in a cauldron of noise. Closer “Starless Event Horizon” is the longest track, stretching over 10:25, and it starts with eerie noises and the guitars bringing hypnosis. Everything is torn apart, crushing and sharing pain, as the guitars sound outright evil at points. Slurry riffs take us into doom, while the song stretches out into the unknown, dropping vicious riffs and corrosive growls that drag the sound to its punishing conclusion.

Death never is a comfortable subject, even amid all of the horrific metal we cover, because it can be utterly terrifying. Where Corpsessed divert the path on “Impetus of Death” is that it’s also a reminder not to fuck around and put off what you can get done, because what if you get your head taken off by a helicopter propeller tomorrow? Yes, this record is heavy and scary, but it comes with that extra motivation to get off your ass before it’s too late for you.

For more on the band, go here: https://www.facebook.com/Corpsessed