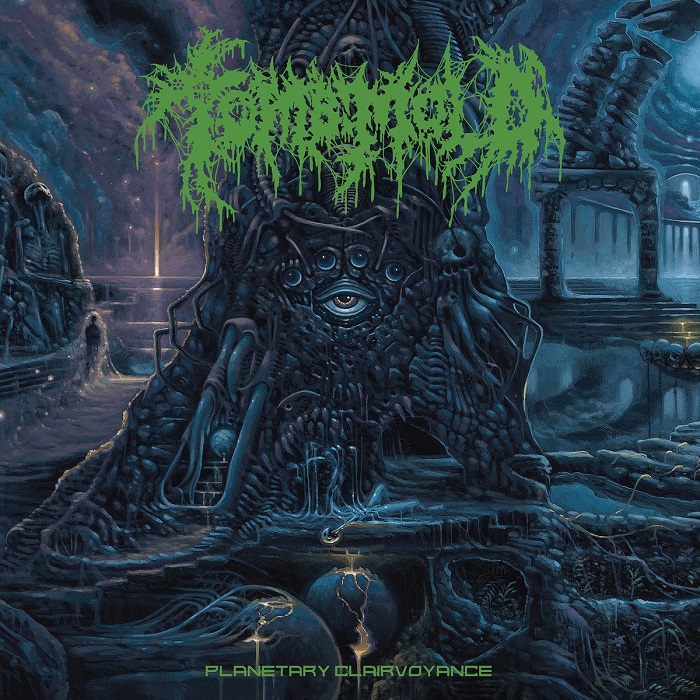 Does death metal exist in space? I’m not really sure. I’ve never been there before. But if it does and it spirals its way across the galaxy, it’s likely being carried there by Toronto beasts Tomb Mold, who blasted back at us this year with their third full-length album “Planetary Clairvoyance.” Their profile has been building for a few years now, and if you’ve ever seen them live, you know they are devastating. This record continues the power they’ve been building, and what’s even more impressive is that it feels like these guys never take a break.

Tomb Mold are on an impressive clip, delivering three devastating records in as many years, the latest, obviously, this seven-track, 38-minute record. Here, they generously deliver more smothering goodness from a band that has justifiably been referred to as pone of death metal’s finest forces. The power is relentless, and the twists and turns on this album could jerk your neck out of place. The band—vocalist/drummer Max Klebanoff, guitarists Derrick Vella and Payson Power, and bassist Steve Musgrave—has truly come into their own as a unit, and the display they unleash on this beast is overwhelming and so goddamn infectious you can’t help but keep coming back.

“Beg for Life” starts the record in a cloud of space haze before the guitars light up, smashing bodies and letting riffs devour everything. The playing is spindly and savage, as the drumming begins to decimate, and the guitars chug through the gates. The track halts as classic acoustic guitars slip in, and as the song rambles back to life, things crush anew. The drums destroy bones, the growls scar, and the guitars shoot off into space. The title cut rips through as riffs play tricks on you, and filthy guitars spread soot over the chorus. The leads chew while the growls boil, sending the track into dust. But wait! A fucking nasty new riff comes in and lays waste to everything, killing as the track comes to its end. “Infinite Resurrection” utterly wrecks shit as massive, nasty growls pummel the earth, and the band starts to decimate everything. The pace thrashes and stomps violently, while the guitars melt through rock, the drumming crushes wills, and everything ends in a delirious assault. “Accelerative Phenomenae” smashes bodies when it starts its run downhill, as the growls suffocate, and mean thrashing eats away at your rib cage. Closer “Heat Death” does a good job living up to its name with its melodic violence as the guitars go for the jugular, and gruff growls hulk their way toward you. The guitars twist and shift, the playing rearranges faces, and the song is sucked into a gross vortex of sound. “Planetary Clairvoyance” is the best death metal album of the year, and it’s actually not even close. (July 19)