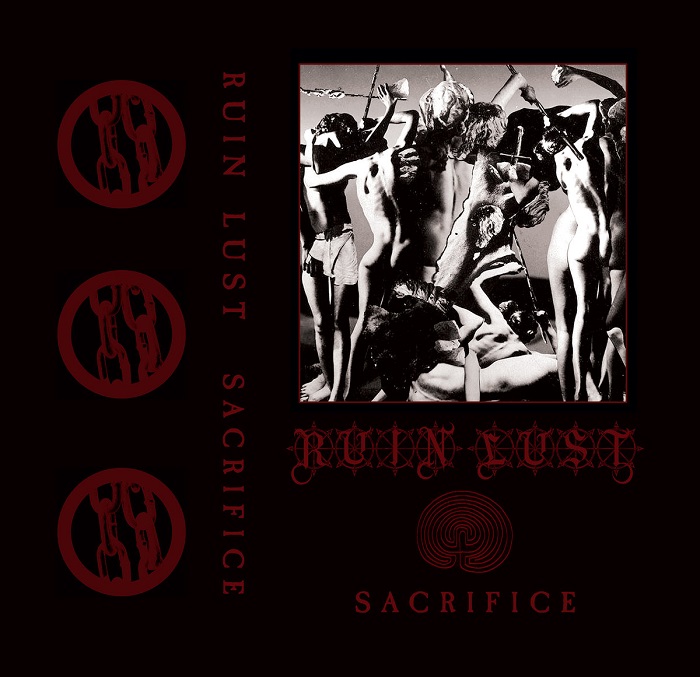 The violent tendencies that bleed forth from death and black metal are a major parts of the sounds’ appeal. There can be some good that comes out of that for a listener, as the music can help you relate to the tension and madness you’re hearing blast from speakers or headphones. It’s a major reason why we’re here, eh.

Any time you dip your fingers into the furious waters created by New York-based black/death metal hybrid Ruin Lust, you have to understand you’re in for a savage beating. You’re going to be swallowed under the waves and have your body ground against the rock, and if you do surface again, it’s going to come complete with bloody wounds and a damaged psyche. All of that is poured into “Sacrifice,” their first record since 2013’s self-titled debut, an offering that made a nice dent in the underground scene before the band disappeared into the void. Now with a seven-track, 26-minute blast furnace in tow, the band—guitarist/vocalist J. Wilson, guitarist S. Bennett, vocalist/drummer M. Rekevics (also of Fell Voices, Yellow Eyes, Vorde, Vanum, etc.)—brings a hellacious assault that never relents over the entire body of the album.

“Summoner” is a drone-filled blast that begins the record, as chaos and noise combine to create a monstrous force, with riffs smearing soot, the terror building, and crazed howls sending chills, heading right into “Magus” and its explosion of pure brutality. The screams echo, while the burly riffs gurgle blood, and the band utterly clobbers you. The assault smothers you, leading you into metallic damnation before things come to a bloody end. The title track delivers deep, menacing growls as the guitars spiral away, creating a wave of confusion. The pace detonates, coming to a thrashy, chugging charge, crushing the bones of everyone in front of them as they leave a trail of death behind.

“Death” lights up right away and sends you leaping back from a flash of fire. The growls erupt, with the pace bringing slaughter and pain, the drummers hammering away, and the sounds feeling cavernous, as evil spirits spread and unleash horror. “Seer” is a quick interlude patched together with droning chants and the noise building, leading toward “Mirrors of Broken Blood” that gets off to a shocking, thunderous start. The pace trudges and chars, with the pace reminding you’re in the midst of battle, the growls devouring, and the thrashing doing optimal damage. The track has a stunning final stretch, with the panic rising at alarming levels before the track fades into the underworld. “言語っていう病気” finishes the album with riffs smashing, ripping apart sanity, while the growls destroy, and the pace twists and mars the nerves. Total chaos is achieved, with the playing splashing and strangling, bringing annihilation right up to the very end.

Ruin Lust’s relentless destruction is on full display on “Sacrifice,” one of the most unforgiving records of this still-young year. It’s a collection that’s not for those looking for comfort or solace, as each ounce of this thing drips with the blood of battle and the tears of regret. It’s been a long time coming since we got another blast from this band, and now we have the blinding blades of hell with which to contend.

For more on the band, go here: https://ruinlust.bandcamp.com/

For more on the label, go here: https://psychicviolencerecords.bandcamp.com/