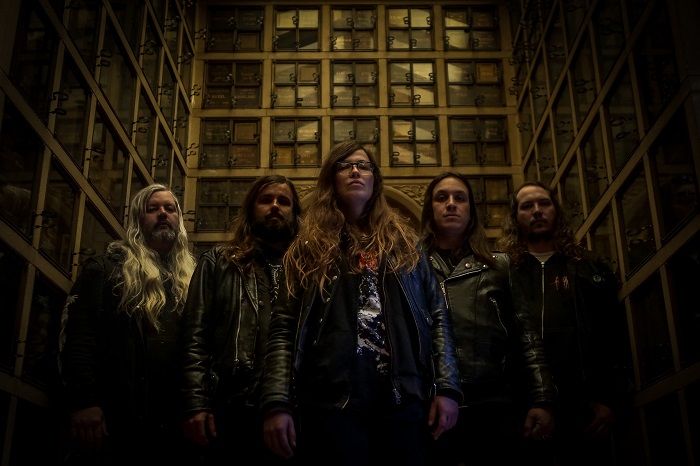 How long can one look at a deteriorating situation without feeling like losing control? This can be physical or mental, by the way, as each situation can be just as stressing. Seeing something you embraced be broken down, often by forces that could make things better if they gave half a shit, can be infuriating and send any sane person into a rage.

That’s a major spark behind “Burden of Sight,” Oakland black metal band Vale’s debut offering, which is utterly, savagely on fire. The music is sparked by what they see in their hometown, the decay, the homelessness, and opportunism by those in control who could do something to curb the issues if they really cared to help. Expand that same idea out across the country, and we can all see it in our own backyards as the lust for power and never-ending greed takes precedence over people’s rights and lives, and holy motherfuck, if we haven’t seen some of that play out before our bloodshot, weary eyes this very week. Over six barn-storming, rage-filled tracks, Vale unleash hell and lash back at those who let things get the way they are. The band—vocalist Kate Coysh, guitarists James Meyer and Daniel Borman, bassist Thaddaeus Perkins, and drummer Justin Ennis—foresees a horrific landscape as a result, where humans consume each other and the scourge of religious power runs roughshod … you know, kind of like how it does right now.

“Final Flesh” rips the lid off the record with noise flooding, the track launching its attack, and the riffs encircling dangerously. Coysh’s wild howls are unleashed and do ample damage, while smashing blasts rip through and destroy walls. Sounds spiral as a slower agony sets in, punching and bruising, while the growls attack again as the song disappears in a cloud. “Guilt Among the Dead” has riffs racing and the vocals crushing, while sinister sentiments are spread generously. Black metal-style guitars bubble with tar as a doomy pit opens and begins swallowing, while the drums destroy, and the song merges with the murk. “The Guilded Path” ignites with fire-breathing guitars and relentless pounding as Coysh’s vocals deliver madness and spite, riding alongside the rowdy punishment. The riffs swelter and smear, while the pace begins to steamroll, and the fires are stoked gloriously. All of that spills into a thick ambiance that brings a curtain of shadows.

“Starvation Eternal” has a thrashy start, as tricky playing causes your mind to panic, and the tempo begins clobbering. The vocals spit fire that can melt bodies, while the guitars hit hyper speed, spiraling into the incinerator where everything is consumed wholly. “Beyond the Pale” brings melody at the front of the track as the vocals smash digits, and an ashen assault leaves practically no room to breathe. The band charges up the engines again, as the playing explodes and strangles, and the final moments of the song are suffocated. Closer “Grief Undone” drizzles doomy blackness, as ominous guitars unleash hell, and the pace flattens and bloodies. The track gets brutal and chaotic, with hints of hardcore woven in for good measure, while Coysh’s insane shrieks are enough to make your skin go pale, as all the elements combust. Double kick drums scramble brains as fierce growls go for the throat, the playing taunts Armageddon, and the track disappears into the dark.

There is no hope on the horizon in Vale’s world, and “Burden of Sight” is a sobering display that stinks of blood and war, and it pulls no punches describing that level of hell. The fact that this album is a little too reality based is nauseating and disgusting, a reality check that some of the worst has come, and too many people are watching it happen. Vale may be reacting to what they see in their own streets, but it’s something that has spread like a disease to every corner of this country.

For more on the band, go here: https://www.facebook.com/valeloud/

For more on the label, go here: https://theflenser.com/