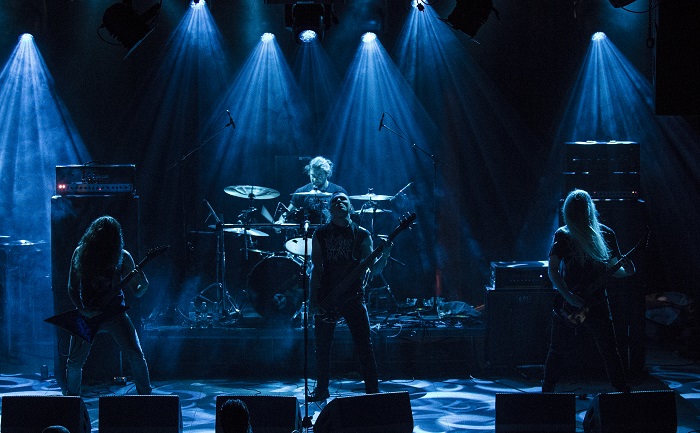 For some reason I have yet to figure out, music always makes me think of weather and a season in which it belongs. There’s literally no music that I ever hear that doesn’t get mentally cataloged in my brain as being suitable at a certain time of the year. For example, Iron Maiden’s “Somewhere in Time” is a height of the summer album. Agalloch’s “Marrow of the Sprit” is for deep winter.

It’s not that I can’t enjoy the music in other times of the year, it’s just that every time I hear them, they make me think of what I expect to see when I look out my window. That’s why it feels like such a weird time to be taking on Krypt’s thunderous new record “Cadaver Circulation,” because this thing feels like it should be heard during a hopeless, lightless blizzard, where you are cut off from the rest of the world, and no one would be there to hear you cry out for help if you needed it. These Fins have dropped off six beefy slabs of doom trauma-laced death metal that’s delivered slowly and painfully. Each visit with this thing has brought new avenues toward misery. It’ll coat you in inches of soot and leave you in agony on the ground as you gasp for breath. The band—vocalist/bassist Anti, guitarists Vile and Jukka, drummer Otso—unloads this over a compact 37 minutes, making the best of every violent second that contributes to this hell.

“Sinking Transient Waters” gets off to a muddy, bloody start with slow-driving menace and death blows blasting out. Maniacal growls from Anti shake your foundation while the guitars chug and thrash as morbidity sets in like disease. All of that is swallowed by hellish noise that squeezes this track to death. “The Reek of Loss” is sorrowful and furious with the growls lurching like an alien beast and the pace suddenly picking up. The track gets violent and dizzying, pounding away with a calculated pace and coming to a punishing end. “Echoes Emanate Forms” has dark riffs drilling, soot falling, and the growls bruising your mid-section. The track scrapes along as dirt and noise swell and then speeds up dangerously, the drums pummel, the vocals gurgle blood, and the song comes to a suffocating end.

“Mycelium” has doomy trudging before the bottom drops out, and things get properly messy. The track has its guts ripped apart while the heaviness and speed arrive and disfigure what’s going on here, and the track smashes to its devastating end. “Vanishing” bleeds in like a poisonous stream, the growls slither in the earth, and the drums punish. Guitars then unleash mournful melodies before a fire sparks and spreads rapidly, the growls boil, and the song crashes and clobbers before echoing out in pain. “Circling the Between” ends the album with morbid ambiance before it bursts open, growls char, and the guitars roll into the darkness. Harsh growls punish while the guitars encircle and taunt, and then sanity is shredded. The track temporarily gets absorbed by a sound cloud, but then the track re-emerges, bringing with it hypnosis before it disappears for good.

So, it’s warm as hell and the sun is shining and people are having fun, but I’m here getting my mind rewired by Krypts and this mind-erasing new album “Cadaver Circulation.” This album hurts every section of your body when you endure it, and it’ll make all the worst, sinister fears welling up in your mind crawl to the forefront. This is a terrifying display no matter what it’s doing outside, though it’s definitely going to come back out once winter swallows the earth again.

For more on the band, go here: https://www.facebook.com/Kryptsdeath/