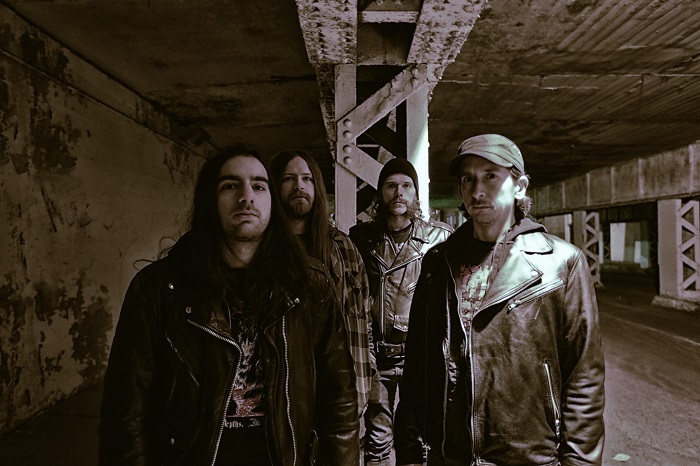 There are plenty of horrors that go on in our own plane of existence, our own planet, that can you imagine what might be happening in planets and galaxies beyond our own? We can’t be the only people who are out to push our influences on others, who try to exert our own strengths, and find ways to be dominant. Good thing closer planets and stars near us aren’t inhabited. What might we do to them?

Chicago sci-f-powered death metal bruisers Nucleus have been imaging what might be transpiring in the universe, something at which they’ve been busy ever since forming in 2012. On their second LP “Entity,” the follow-up to 2016’s “Sentient” (though thematically this picks up from their split “Fragmented Self” alongside Macabra), they unleash eight more immersive, violently creative cuts ensconced in a story about a bizarre shape-shifting force that forms in deep space, looking to exert its terror across the universe. A group of beings from multiple worlds, many alien to each other, must fight back to resist and destroy its push. It’s a story maybe too relatable and a little scary if, say, all of Earth’s leaders had to get their collective shit together, which is another thread you can think about during this album. The band—guitarists/vocalists Dave Muntean and Dan Ozcanli, bassist Ryan Reynolds, drummer Pat O’Hara—put their own alien-like imprints on their brand of death metal and keep your imagination bubbling as you take this enthralling 38-minute journey. 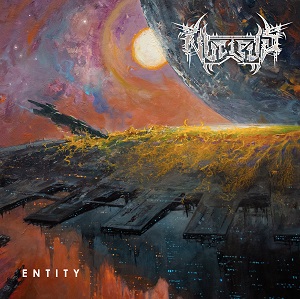 Fittingly, the record kicks off with “Arrival,” as a weird bassline slithers in before the track bursts with force. Weird, spacey growls and a proggy fury combine to fuel the engine, while the guitars go off, smearing soot in your face. Soloing lights up at the end, as growls devour everything, leading the title track into the room that begins hammering right away. Guitars blind while the pace chugs, and the drums loosen weak parts of your skull. Later on, the guitars stab in a show of progressive violence before things hit orbit and collide with “Uplift” and its confounding guitar assault. The track blasts and lets your head swim in chaos, while the guttural growls eat into the ground, and tricky thrashing emerges. Fluid soloing whips, while the aggression is magnified before mashing into “Mobilization.” There, the tempo mars while landing heavy blows, with the pace tearing your senses. This mixes into a strange, hypnotic flow, a pocket of strange howls, and a slower delivery that still managed to pulverize.

“Approach” is clear and cosmic at the start before things get frightening, and the doom hammers fall. The track opens up while keys ooze over the body, and then the soloing erupts, with the pace hammering and this instrumental cut leaving you bloody. “Outpost” immediately follows and flattens everything, led by sickening growls, splattering leads, and overall madness. Some playful weirdness emerges before the pace applies ample pressure, bodies are shredded, and the remains hurtle toward “Dominion” that has a fluid, creative start. Eerie speaking sends chills before the growls mangle bones, and a massive assault hits from every direction. The playing starts to turn delirious as guitars tangle, growls deface, and everything flows into album finale “Timechasm” that trickles in like an intergalactic poison. The track has a weighty, meaty feel to it, as the drums lay waste to its surroundings, destruction is at every turn, and the track is swallowed into the cosmos to be imprisoned among the stars forever.

Space horrors and having to face down intergalactic forces that likely don’t have our best interests in mind might actually be the things that could unite this world and get people to stop acting so goddamn selfish already. Let me dream, OK? Maybe a trip with Nucleus’ punishing, horrific “Entity” is just the sobering situation to give us some perspective. And if not, at least we can have our brains mangled by top-notch sci-fi death metal while we’re devoured whole.

For more on the band, go here: https://www.facebook.com/nucleusmetal/

For more on the label, go here: https://www.unspeakableaxerecords.com/