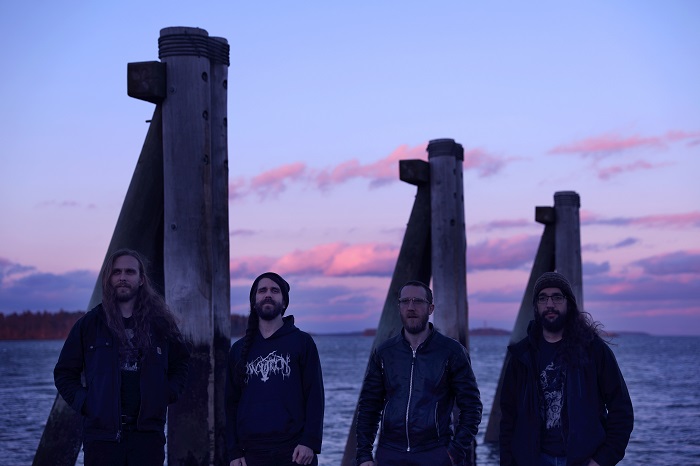 I’ve only been to Maine once, a few years ago with a former SO who took me there for the hiking and natural aspects. It was an amazing adventure, a place where we walked to so many different heights, saw things far different from what’s here in Pennsylvania (itself a magnificent state), and felt a connection to the Earth for which I often long.

So, I’m rather envious of long-running black metal band Falls of Rauros who live there and splash as much of the majesty of their surroundings into their breath-taking records. Their latest is “Patterns in Mythology,” their fifth full-length release overall and their first for new label home Gilead Media. If you’re already a disciple of their spacious, atmospheric power, prepared to get bowled over yet again with their art, as they pack explosive fire and humanistic energy into these six tracks. You also can’t help but indulge in this band—guitarist/vocalist Aaron, guitarist/vocalist/keyboard player Jordan, bassist Evan, and drummer Ray—and feel the forces of the Earth in everything that they do, from their volcanic heaviness that feels like a massive stormfront coming on to their rustic folk moments when nature takes a step back and lets us ease into her arms. It’s hard not to be overwhelmed, but that’s a good thing as you’re forced to absorb every drop of their music almost for nourishment.

“Detournement” opens the record with noise rising, feelings beginning to well up, and the momentum slowly building toward glorious heights, pushing its way into “Weapons of Refusal,” the longest track on here at 11:11. Riffs chew as shrieks emerge, as the band unleashes its black metal fury, punching into a cavalcade of chaos. Leads splatter as the song goes into a melodic rush, then acoustics brings winds of change before the song soars again into ferocity. The band brings with it a whirlwind of sensation, as a practical deluge of sounds erupt, ripping at your heartstrings, while the band keeps toppling minds as the track comes to an end. “New Inertia” has a clean start that revels in elegance before the lid is torn off, and growls and shrieks rush down like a mad rain. That madness gives way to serenity for a stretch before a molten solo tears its way out, and a proggy, exciting run begins to take place. That brings with it guitars that feel like they’re ushering in a warm summer day, while the band keeps things on high before the song comes to a smashing end.

“Renouvellement” is a breather from the blazes, and a really hearty one at that. Acoustics stoke the fires, while clean singing adds a different texture to the record, and gentle harmonizing toward the back end feels organic and calming. “Last Empty Tradition” then comes in with guitars bursting at the seams, growls crushing, and the power being injected all over again. Layered leads combine to create a singular force as guitars pull back and let echo wash over them. An explosion brings us out of our trance as savage vocals do significant damage, the sounds hammer down with unreal force, and melodies blast out, ending things on a high note. “Memory at Night” closes the album, as the bass jars, darkness spreads over the land, and the vocals open up some new wounds. The leads begin to glimmer before spiraling away as harsh, urgent shrieks rip open sleepy eyes, and the playing absolutely hammers. Suddenly, the track takes on a cosmic feel, as noise fills the room, senses are tested, and graceful playing pushes the song to its final gates as everything is allowed to bleed away.

I’m not sure when or if I’ll ever get back to Maine, but Falls of Rauros always remind me of what I felt when I was there for those few days, absolutely in awe. “Patterns in Mythology” is another bold step in their journey to bring us and them closer to our essence, and it’s an album that pushes and pulls you through so many different emotions. Falls of Rauros remain one of modern black metal’s most special bands, and this new entry only cements that further.

For more on the band, go here: https://www.facebook.com/fallsofraurosOfficial/

To buy the album or for more on the label, go here: https://gileadmedia.net/