It wasn’t very long ago that a lot of really good underground metal shows (for lack of a better term) would pass over Pittsburgh regularly. But slowly over time, that whole thing changed, and we have a veritable riches of shows each week in which to indulge. This week alone there are four heavy music shows in our area, and Steel and Bone Vol. 1 is one of them.

Steel and Bone Productions is a group that has grown out of Winterforge Promotions, run by the gentlemanly Christopher Woodford, who is taking a much-deserved break from promoting. To really signal their arrival, Steel and Bone will present an unreal seven-band fest Saturday at Cattivo that has a lineup that is unstoppable. There are three bands that have brand-new records out, all of which are some of the best of the entire year, plus we have the Pittsburgh debut of Horrendous and a slew of other bands both national and local who will make this an event you’d have to be an asshole to miss. Things get started at 5 on Saturday (doors are at 4), and along with these monster bands, there also will be tons of merch available (Season of Mist will be there as a featured vendor), as well as Cattivo’s pizza that is some of the best in town. Here’s a quick rundown of every band you’ll see that day.

ABYSME (5-5:25): This Pittsburgh death metal band has been an institution the past 15 years, and their 2012 debut album “Strange Rites” was reissued in 2016 by Our Ancient Future, and they put out an EP last year called “Acrid Life” on the same label. If you haven’t caught Abysme and you’re a local, what fucking shows have you been going to see? This band will destroy your life, so best be prepared.

For more on the band, go here: https://www.facebook.com/abysme/

RITUAL MASS (5:45-6:10): Ritual Mass is a Pittsburgh band that has a 2017 demo that is one song and 14 minutes to their credit officially. But they bring way more than that. They’ve been destroying audience on shows locally for the past few years, and they’re a band you really need to pay your mind, because their power and chaos will smother you.

For more on the band, go here: https://ritualmass.bandcamp.com/releases

DAEVA (6:30-7): Black thrashers Daeva played their first live show ever in Pittsburgh at last year’s Migration Fest, and they return to the scene of the crime (well, at least when it comes to the city) nearly a year later with another serving of vile chaos. 20 Buck Spin delivered their debut EP “Pulsing Dark Absorptions” which is a five-track, 20-minute mauler (including a cover of Mayhem’s “Deathcrush”) that only hinted at the madness ahead. Not sure what they have in store for Saturday, but chances are it’ll split your face in two.

For more on the band, go here: https://www.facebook.com/daevablackthrash/

SUPERSTITION (7:20-7:50): Vile and heathen death metal your thing? Then, by all means, let Superstition lure you into the darkness, where you have no idea what awaits. They just released their debut full-length “The Anatomy of Unholy Transformation,” and this band contains members of Ash Borer, Predatory Light, and Vanum amongst them. But what they do as Superstition goes even beyond what they do with their other bands, delivering scary, relentless, punishing death that feels like it pays homage to the pioneers of the genre but delivers and smears modern blood into the mix.

For more on the band, go here: https://superstitiondeath.bandcamp.com/ 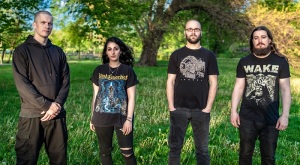 IMMORTAL BIRD (8:10-8:50): If you’ve read this site for an extended time, first of all thank you. Second, you’ll know we have a soft spot for Chicago death grind mashers Immortal Bird. But look, it’s not just us. Their new album “Thrive on Neglect” has been getting praise left and right, and it’s for good reason. This is the best thing they’ve done to date, and just like Tomb Mold, they’re even better live than on their recordings. Rae Amitay is a fire-breather as the vocalist and lyricist for this band (spend time with the words if you want your soul to bleed) and the rest of the band is just as ripping, making this a formidable unit that’ll break you.

For more on the band, go here: https://www.facebook.com/immortalbirdband

TOMB MOLD (9:10-9:50): Speaking of death metal, Toronto’s Tomb Mold have made some of the best music in that sub-genre over the past three years, when they have released three records, the latest of which is the wicked “Planetary Clairvoyance.” There are few bands doing it things as effectively as these guys, and the amazing thing is as good as their records are, they’re even better in the live setting. Their new one only will have been out for 24 hours by the time they hit town, but that should give you enough time to overindulge in this album before they start up and tear out your throat.

HORRENDOUS (10:10-end): Not many bands are twisting death metal to their ill quite the way Horrendous have the past decade. Their latest album, 2018’s “Idol,” saw them take their art even further, mixing more progressive elements into their sound and again challenging what it means to play death metal in the first place. “Idol” was the band’s first record for Season of Mist after years recording for Dark Descent, and it’s an album that firmly cemented them as one of metal’s most interesting bands.

For more on the band, go here: https://www.facebook.com/HorrendousDeathMetal

To get tickets, go here: https://www.brownpapertickets.com/event/4233224?fbclid=IwAR2dtFOS3SXkCxjH8fmhMGo6NbYT02DfiLUTBLPORF5BHO-9wPfePBSAGHE