Have you ever put on a record from a band not really knowing what to expect, and when the whole thing is over, you wonder what the hell has just happened to you? Like, you lost track of time somewhere, and you know you’ve been through an adventure because your head is swimming with information, but you can’t pin down just how you go to where you are now.

My first trip with Grogus’ second record “Four Kings” was that exact thing, a total mindfuck that definitely made it feel like I’d been through a war, even though my body had no wounds or scars with which to attribute to said experience. I’m not even sure I can accurate describe what I heard on this record, though I’m going to spend 500 or so words trying, so if this all goes to shit from here, just know this music is impossibly heavy, defiant to all rules and regulations, and one of the most satisfying records I’ve heard all year, and I’ve heard a fuck ton. This one really stands out for its creativity and heart that the members—Jonas Yela, Dan Lee, and Boone Epstein (formerly of Former Worlds)—put into these six tracks that feel like they’re picking you up for a world-toppling backbreaker, only to drop you right on the base of your neck. 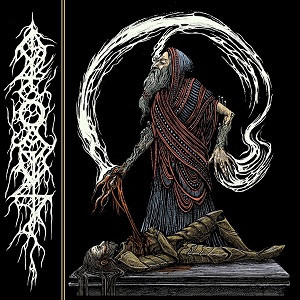 The record opens with “An Oceantomb of Centipedes,” which, if we’re being honest, is a really uncomfortable idea. Anyway, wild howls, muddy clubbing, and drubbing doom drag you through the dirt mouth-first, as the thick bass trucks, and a brief clean breather leads to the next round of blows as a storm begins to build. The band continues to clobber away as sounds well, raw cries and clean guitars clash, and everything fades into mystery. “Biovore” goes right for the jugular as meaty hammering and heavy screams lead the way, and the pace tears your apart in the midst of a tornado. The monstrous devastation never lets up until the track comes to an abrupt, fiery end. “An Augur of Ebrietas” is heavy and tricky, stomping dangerously as the growls lay waste. Guitars burn as the savagery is multiplied, while buried howls and a rumbling assault bring this one to an end.

“Goat Temple” is the longest track here, clocking in at 10:01 and letting noise and space debris float across the sky. An ambient horror is established as the first seven minutes of the song float in mystery, taking you far under the waters until it feels like the pressure will break you, and then jarring you to the surface again, as the volume and violence rise. Noises continue their waves, drums tap and echo, and everything is sucked into a vapor cloud. “A Call Beyond” has guitars that purposely try to tangle your brain, growls that land blows into your chest, and guitars that slice and dice. The track twists maniacally as vicious growls strike, and everything is burned off. “An Altar of Despair” ends the album by bringing in static-marred riffs, dangerously thick bass lines, and leads that bleed and glimmer, upping the heaviness factor. The track hammers away the entire time, eventually grinding its way into a liquidy atmosphere that smears your mind. The final minutes lead to a giant crescendo that builds, blows its stack, and leaves everything around it buried in rubble.

Cosmic oddness, massive heaviness, and bizarre creations make up “Four Kings,” a record that’ll definitely leave you in a heaping pile of some sort, be that physical or mental. Grogus deliver a massive hammer blow on this album, and if you’re like me, you’ll be perplexed as to how you got from point A to point B, but revisiting the record repeatedly does help you manage the fury. This is a mashing album that’s challenging from front to back, and when you’re done, you’re bound to find yourself utterly exhausted but enthralled you took the ridiculously bumpy ride.

For more on the band, go here: https://www.facebook.com/groguscult/

For more on the label, go here: https://www.facebook.com/TridroidRecords/