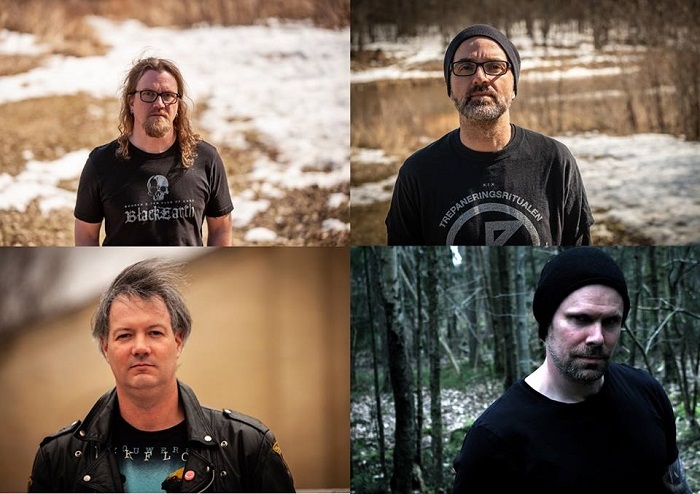 Amazing what you can accomplish these days without creators even being in the same room as each other. We’ve all read and heard about bands writing entire albums through file sharing, and many of us collaborate on projects with people and resources spread out all over the place. Technology: It’s not always used to making humanity seem like the shit worst!

International doom band Culted have made that model work for more than a decade now, and over two full-lengths and two EPs, they’ve spread their horrifying shadows. Their latest EP is the more-than-a-mouthful-titled “Vespertina Synaxis – A Prayer for Union and Emptiness,” a three-track display that finds the band moving into noisier, grittier terrain washed down by electronic horrors. Its creators—Matthew Friesen (guitar, bass, keyboards, noise and percussion), Michael Klassen (guitar, bass keyboards, noise and percussion), Kevin Stevenson (drums and percussion), Daniel Jansson (vocals and noise)—are not deterred by 3/4 being in Canada and the other member hailing from Sweden, as their darkness unites them and spills terror over these harrowing and unforgiving three tracks. 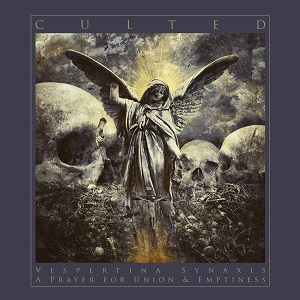 “A Prayer for Union” starts things off, and it’s a dark, shadowy instrumental that weaves in narration from the show “Rectify,” adding to the warped nuances of the piece. As you delve deeper, your mind grows unsteady, things ramble off the rails, and we’re into “A Black Chalice” that lets the slurry doom collect like molasses. Jansson’s vocals are like whispery growls before things erupt at the center, and his approach turns to guttural wails. Chugging heat takes over and wilts flesh as the tempo drives and gets uglier, and the guitars continue to char. The pace changes a bit with the leads glimmering and offering strange light, but then sooty power reemerges, and a psychedelic edge is applied. That leads to a hellish inferno illuminating the basement-dripping horrors, and then acoustics wash in and provide relief, and the words come in hisses. “A Prayer for Emptiness” ends the EP by leaking strange organs and buzz, and the vocals feel like they sit in the clouds. The riffs trudge as the temperatures rise, and Jansson’s static-filled roars pound away. The tempo repeats and rumbles, drubbing you into psychosis, as mad screeches and noise combine to whip everything into a frenzy. The organs return ever so gently while growls echo, and everything buries itself in a pit of drone.

Culted’s return to making hideous, doom-encrusted sounds is a welcome one, though I guess we can forgive them for their long absences considering the distance between them. “Vespertina Synaxis – A Prayer for Union and Emptiness” is still a pretty beefy offering despite it being an EP, and it’s an ideal tide-over offering until the band comes back with another ashen full-length. It’s a great way to get a small taste of what we missed as we look forward to their surely mind-slicing future.

For more on the band, go here: https://www.facebook.com/Culted/