People complain a lot when they don’t get the things they want. In music especially. Not saying every twist and turn a band or musician takes is a great one (in fact, there have been a lot of bad decisions over the years), but it’s their art and their brains making it, so sometimes divergences from the path end up being for the good.

For the past several years, there has been a lot of hand wringing over French blackgaze dreamers Alcest not being heavy enough and getting away from the elements that made people love them in the first place. There’s some validity in the claims because Alcest have backed away from the heaviness of their earlier work, especially when it came to 2016’s “Kodama” (an album I really enjoyed despite it being their least metallic effort to date). But here we are, three years later, and the band—vocalist/multi-instrumentalist Neige, drummer Winterhalter—return with “Spiritual Instinct,” their sixth record overall, and those seemingly abandoned pockets of ferocity have returned. But this isn’t an example of “you fuckers happy now?!” fan service. The shrieks and black metal elements are worked in organically and seamlessly, as the band maintains the earthy melody of the past couple records and simply lets the more abrasive parts settle back into the recipe, making it seem like they never went anywhere at all. It’s their heaviest album in some time, but it’s strong not just for that but for every strange twist and turn this band takes over these six tracks. 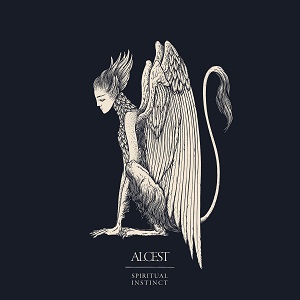 “Les jardins de minuit” begins the record with the bass driving and gazey playing, all par for the course for Alcest, with Neige’s singing reaching for the atmosphere. But don’t let yourself slip into a comfort zone because, before you know it, the power surges, and wild shrieks enter into the chaos, keeping things vicious and melodic. That sensation rushes ahead as the track has a gigantic feel, as shrieks and strength drive to the finish. “Protection” is crunchy and atmospheric with strong riffs and soaring singing. The track then gets heavier and more raucous as shrieks wash in, and the tempo pounds before the track swings back toward friendlier skies, with “ah-ah” calls lathering texture and the song gushing away. “Sapphire” has a spindly opening that crawls spider-like before the body begins to form. Clean singing and a mid-tempo trip are laid out, as the vocals swell and the playing is extremely catchy. As the song twitches, the shrieks rain down before we switch back to calmer singing, and the track chugs away.

“L’île des morts” is the longest track, running 9:04 that gets started with sharp synth beats before the riffs begin to lather. As the song grows into its body, clean singing and fiery shrieks trade places, like they do on so many songs here, while more “ah-ah” calls ring out, and things start to calm down while drums patter. A gazey cloud hangs overhead before the track rips back to life, the singing re-emerges, and a glassy haze brings the song to an end. “Le miroir” is heavy and sludging at first before the riffs turn more folkish, and the guitars glimmer amid the rumbling. The vocals stretch while the playing boils consistently, while wordless calling rises up, and the track burns brightly before giving way to serenity. The title track ends the album by bleeding into the scene with dreamy vocals setting the pace. The playing hits a mid-tempo pace as the vocals get higher, the sounds cascade, and things wash through. The drums tumble into stinging guitars hanging in a fog, with the track fading into an electric flood.

Alcest’s metallic side may have remained dormant for a while, but it’s clear that things were percolating under the surface, waiting to push through on “Spiritual Instinct.” But this isn’t just the band bringing back heaviness and savagery in order to make other people happy or because they need to do this. This is an inspired, dreamy burst of chaos that feels like Alcest’s early thorns colliding with their current introspective mind to create something exciting and rupturing.

For more on the band, go here: https://www.facebook.com/alcest.official

For more on the label, go here: https://www.nuclearblast.com/en/label/