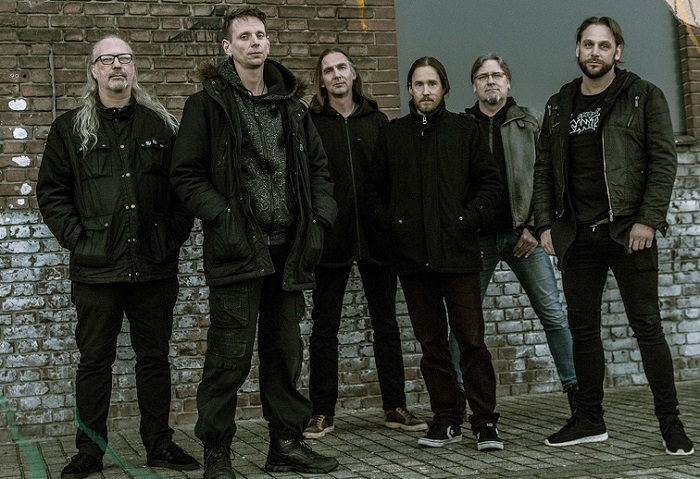 Here we are, 11.5 months after we started writing up 2019 records, and we’re on our final one for this wretched calendar year. So, what better way to put a rusty dagger into this thing than with some gut-ripping misery and sadness? It’s how we’ve felt the entire run anyway.

That’s all delivered to you by long-running Dutch death-doom prowlers Officium Triste who are showing up later this week with their powerful sixth long player “The Death of Gaia,” their first record in six long years (that last one would be 2013’s “Mors Viri”). Everything you expect from this funereal band is here from the dreary rain that feels like it darkens and dampens every corner of this display to the guttural growls that feel unearthed from guts to the strings and synth that lather the music with unavoidable pain. The band—vocalist Pim Blankenstein, guitarists Gerard de Jong and William van Dijk, bassist Theo Plaisier, keyboardist/acoustic guitarist Martin Kwakernaak, drummer Niels Jordaan—levels you with an eight-track, 56-minute record that should keep them in the same conversation as My Dying Bride and Paradise Lost when it comes to bands that can change your mood to dour in a heartbeat.

“The End is Nigh” begins with strings stretching and the song slowly opening its jaws, as the guitars work on your heart, and the music bleeds along with it. The music is melodic and misery-inducing as Blankenstein growls that this is “our final hour, our dying breath,” before he warns that, “The horsemen are riding out.” Not too hard to figure out what’s happening there, and it chews your psyche as the song ends by the strings fading. “World in Flames” has keys dripping before the playing bursts, while soulful guitars join up with gothy keys. The tempo swells as it sits in cold water, as Blankenstein howls, “Take a look at what mankind has become,” letting the song churn out in despair. “Shackles” reveals ceremonial doom as wrenching growls break through chest cavities, and the keys glaze. The track goes from dark to downright eerie later, moving in calculated fashion as Blankenstein wails, “I cannot take these shackles away,” as the track ends in a panic. “A House in a Field in the Eye of the Storm” is a quick instrumental track with clean guitars and keys whirring before the leads soar, and the track bows gently in echo.

“The Guilt” situates in a morbid synth fog as Mariska van der Krul lends her voice to the song, playing emotional tug of war with Blankenstein’s harsh growls. The pace trudges for the most part, though the keys add extra gray textures, and when van der Krul finishes the song by admitting, “I did my time,” you get the sense she’s both starting and ending a period of emotional tumult. “Just Smoke and Mirrors” is, in a sense, the one bright spot, as the track urges its subject to keep fighting and not give up despite the forces the person faces. “Hold back your tears, you’ve got to stay strong,” Blankenstein urges, while colorful guitars burst out of corners to offer solace briefly, as he ends his message by assuring, “There’s nothing that can hurt you,” as the track drifts away. “Like a Flower in the Desert” unloads guitars charging and the growls rumbling, as the words talk about the pain of being alone, with no one to offer their support. The track chews at your bruised nerve endings, reminding you pain is at your very fingertips. “Losing Ground” closes the record with clean singing pushing, growls slithering behind, and the tempo taking its time to exact its mission. The track gets darker as it goes as the keys rain down, and morose tidings creep down your back. The playing sprawls over its final minutes, letting the track’s life slowly drain away, as the record ends in a flatline.

It takes a soul full of blackness and a lifetime of misery to create music as churning and black as Officium Triste, and there’s barely a moment on “The Death of Gaia” that lets in any light. You feel the heaviness emotionally and physically from the start, and they don’t take their boots from your chest until nearly an hour later. This band’s name should come out more mouths when discussing the world’s great death-doom creators, and perhaps this album will make that happen sooner rather than later.

For more on the band, go here: https://www.facebook.com/officiumtriste

For more on the label, go here: http://tometal.com/