It feels like there are 50 black metal albums released each week, and because of that, it’s so difficult to navigate through it all to find the stuff that really works and isn’t just here to clog the pipelines. It sounds like a lot of whining from a dude who gets to hear a lot of music. It is, but it’s also a real issue. There’s a lot of this stuff, and I’m sure I miss good records each year because of it.

Sometimes it’s a matter of trial and error, and that’s what happened when I tackled “Styggdom,” the second album from Nordic black metal force Nattverd. Despite having a decade of time together under their bloodied bullet belts, the band only offered up their debut three years ago. I’m pretty sure their first one got swallowed up by the overflow of releases that week, but that wouldn’t happen this time, and this is one hell of a destructive, but also imaginative effort that mixes a lot of dark with some refreshing atmospherics. There also are a lot of traditional elements to their music, as they build these songs, many of which are pretty lengthy, like labyrinths in which you can’t help but explore. The revamped lineup—Serpentr (vocals), Ormr (vocals, guitars), Atyr (guitars), Sveinr (bass), and AntiChristian from Tsjuder handled drums on a session basis—combined darkness and energy into these songs, and that pays off when tackling this behemoth. 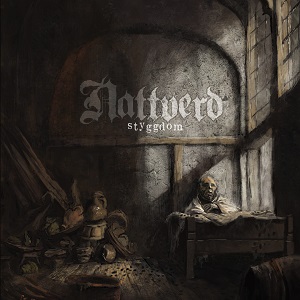 “Slakt Dem, Der De Loeper Hodeloese Rundt Baalet” opens the album with eerie noises and bells chiming before a furious assault is unleashed. Fierce shrieks rain down as the band packs on the filth, mashing away and grinding flesh in their gears. Later on, things get hypnotic and strange before the tracks sizzles out in intensity. “Dragsvoll” has guitars charging up and the growls creaking strangely before the riffs ramp up heavily. The pace stampedes over its victims before atmosphere is unleashed, and then the vocals choke away as rage spills from every seam before the track fades out. “Skoddeskot” has dramatic synth setting the stage as weird sounds sweep through, with the track breaking open about two minutes into the track. Leads flutter and sting as vicious howls wail, speed returns, and the power hammers all. “Heksebraan” is the longest cut, running 9:22 and letting guitars flood into a hazy gaze. The track then smears blood as the voices wander, speaking behind a wall of carnage. Prayers are paid to the old gods while the playing and screams melt together, and a long instrumental section buries this song deep.

“Gatelangs i land og rite” is foggy and churning when it kicks off as the vocals howl heavily, digging into your diseased soul. The tempo is devastating as the playing is a swelling force, ramming heavy boulders into your prone body, with everything burning out into terrified screams. “Gamle Erik” is dingy and molten, with female voices chanting and the band delivering aggression. The sounds swarm and burst, stirring and unsettling your minds as whispers whip through the atmosphere. The track then unloads a massive attack toward the end, racing hard toward the finish. “Hedinger ad en svart verden” punches wildly but with precision as wild vocals and racing guitars mix up your guts. Thick basslines snake through and open wounds, while adventurous leads light new fires, and the track lands final blows before bowing out. “Guds djevelske naervaer” closes the album with sounds hanging overhead, slowly flowing in as riffs begin to pick up. Grim growls and a battering front approach while melody picks up and enraptures. The playing then gets hypnotic and purposely repetitive, like you’re being lulled into a trap. Harsh growls strike hard as the band mounts its final assault before flames consume all.

There’s a shitload of black metal out there, not all of it worth your time, but Nattverd manage to rise above all of that and punish you with “Styggdom.” Their Bergen hometown perhaps helped them gain the right dark magic via osmosis, but whatever it is, they absolutely dominate on their second effort. This band is the real deal, and this record more than validates that statement.

For more on the band, go here: https://www.facebook.com/nattverdofficial

For more on the label, go here: https://www.osmoseproductions.com/