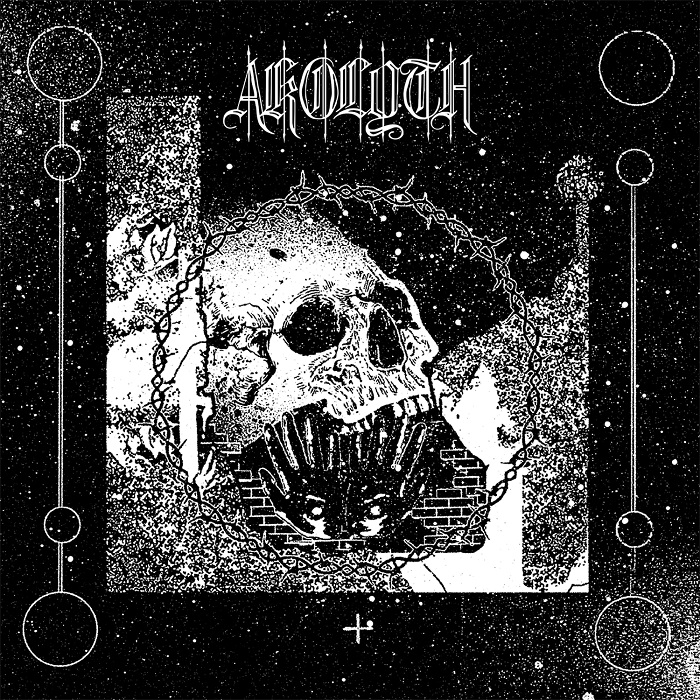 So, I get a lot of promos from bands I don’t know about beforehand. When that happens, I dial up the internet (Ricky Morton rules!) and try to learn what I can, whether that’s other releases they have out, who’s in the band, their history, or whatever else there is to know. But that doesn’t always work.

So, the band Akolyth have put out their debut self-titled record on Amor Fati, but digging into just about every source I have at my disposal, I came up with nothing. No idea who they are, where they came from, how long they’ve been together. But none of that really matters in the end. What is crucial is how their music sounds, and it is horrifying and truly satisfying for anyone looking for aggression and evil in equal amounts. This is normally where I tell you who’s in the band, but again, I don’t know who they are, as mentioned, but the music works its way down my spine, chewing away at nerve endings, and leaving me bleeding in a pile of rubble. This is a bruiser of a record no matter who is involved.

“A Work of Ages” starts off with creaking growls and punchy riffs that aim to topple. Strong guitar work rams away, while the growls add thick layers of filth to what’s already a foreboding environment. The playing stampedes with raw power, speeding up and dangerously leaning into bends, mashing away with a monstrous spirit. The drumming decimates even more violently as the track blows out in smoke. “The Night, the Fog” starts laying in the strikes almost immediately as the growling lurches, and the sweltering pace leaves you sweating and gasping for air. Deranged echoes pummel while desperate howls call out in the night as the playing hits a full boil, and then everything rounds back and continues the pressure. Heavy body shots are dealt while the atmosphere gets sucked up in tornadic winds and driven into the ground.

“What Dwells Between Fractured Worlds” bursts open with echo-rich screams and riffs driving right into a front of decimating drum work. It feels like your chest is being crushed as cackles ring out, and the playing flattens you before entering into a thrashy barrage. The wails feel meaty and smothering while the pace mashes you, and a massive fury strikes like a folding chair to the face. “To Become His Doorway” finally brings mercy, but not until it lays waste for 9:18. The drums again bring devastation, speeding along and mauling while fierce yelps blast into a gale force wind. The pace lumbers like a slow-moving cement truck with no one behind the wheel as the riffs go off, and the blowback burns your face. The final moments are a struggle with terror as the playing wrestles you to the ground and demands outright submission.

This devastating display of death from the faceless void that is Akolyth is a chasm of mystery and horror that spreads over this stunning debut record. These nearly 37 minutes drill inside of your psyche and set up shop there, and since you’ve willingly let them in, they’re not vacating. This will leave warped, mental bruising that will take ages to cure.

For more on the label, go here: http://www.amor-fati-productions.de/