It’s no secret—or at least it shouldn’t be—that this world is coming apart at the seams. Socially, we’re at an utterly terrifying level, there is a plague sweeping across the planet that lots of people are pretending isn’t real, and our natural surroundings have been suffering at our hands for decades and decades now, with those who can do something about it pretending like it’s fiction.

But we’re not going to beat the Earth if we choose that fight. It’s been here before us and will exist once we’re gone, and that is woven into the DNA of “The Great Dying,” the debut full-length from black metal force Ferus Din. This record actually has been available for about two years now as it was released digitally and on CD in 2018. But Tridroid Records swept in to do what they do best as they’re releasing the album on cassette to give it another burst of life. It totally deserves it. This five-track, 43-minute effort is a blazing assault on your senses as it follows the birth of the planet, its life cycles, and the final events that extinguishes all existence. The band—vocalist/guitarist Andrew McGirr, vocalist/flutist Allana Sturm, bassist/guitarist Joe Leisling, drummer CW Dunbar—packs musical destruction and emotional turmoil into this record that depicts the events that choke us out for good and leave behind a smoking pile of existential ash. 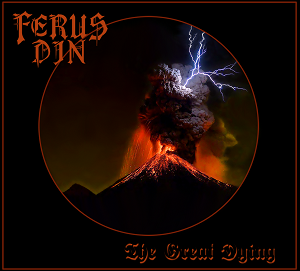 “Neoblastic Bombardment” starts with a wild burst as guitars chug and the shrieks hammer away. Growls slip under the surface as Sturm’s flute is unleashed for the first time. A vile assault spreads over the scene while the flute playing flutters, and the tempo burns brightly and dangerously. Gnarly growls meet up with a speed attack, while the intensity builds, Sturm’s playing catches steam, and the track rips out. “Caldera” feels folkish even amid its horrifying nature while the track tears open and reveals feral tendencies. The vocals scrape as the tempo thrashes away, while the flute lines and the rapidly stampeding guitars do their damage. The pace gallops while the leads catch fire, as the wails of, “Regal! Burning! Black! Wild!” hammer home to fiery final moments.

“Dissolution in the Spirit Pool” is dizzying when it starts before all hell is unleashed, and the leads bustle. The playing gains ground like a team of horses digging into the soil while the vocals creek and speedy arrangements stab away. Flute pushes in and joins the power before a gust of calms arrives, leading to a brief bit of respite. The gears slowly turn again and the track openly mashes your bones, cutting and melting as the guitars cough ash. “Armus, Exile” is the longest cut at 13:49 as it enters with guitars warning of storms and the leads shimmering. The vocals are a rapidly delivered string of shrieked words, belting, ” Your hypocrisy, your heresy, the chasm at the center of your empty fucking heart, I am your exile!” Ferocity works its way into a hypnotic chasm with a long reach and ability to warm your mind, and then the carnage returns and burns as coarsely as ever. The track takes on a progressive, yet hellish feel while final wails and tornadic guitars blister into hell. The 7:35-long title cut ends the record, opening with a huge melodic flush, flutes, and an explosion of vocals. A deluge arrives and begins to leave things in tatters while the hammering pace feels gigantic and impossible to topple. Black metal savagery ignites, leading to the flute playing riveting, destruction promising the end, and the cries of, “Dancing upon the unfathomable ruin, O cry out in rapture to honor the halls of the dead!” driving the final nails into humanity’s coffin.

“The Great Dying” has been in our world for nearly two years now, but for those who have yet to tackle Ferus Din’s hellfire-raising debut record, this cassette reissue is a perfect way for you to make up for lost time. There is a ton of black metal out in the world, so trying to find what really works and feels genuine can be a long search, but Ferus Din’s majesty and malicious compositions hit the mark every time. This is a band that deserves to be one whose music should be burning through more minds right now, so perhaps new life for “Dying” helps get them there.

For more on the band, go here: https://www.facebook.com/ferusdinbuffalo

For more on the label, go here: hsttps://www.facebook.com/tridroidrecords