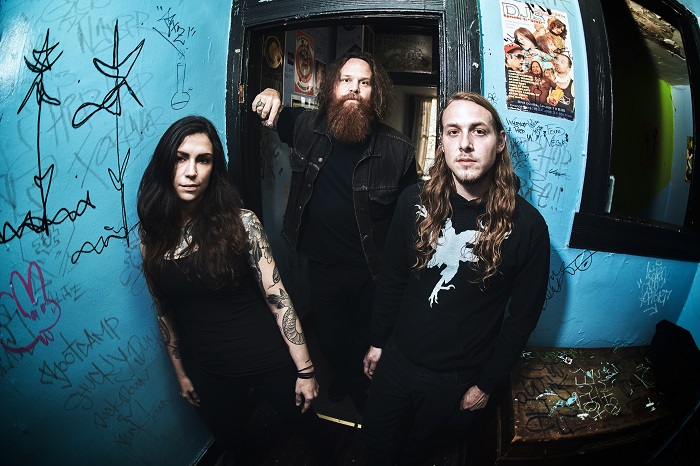 Keeping busy during the scourge that is COVID hasn’t been super smooth for everyone on this planet. It can be easy to find yourself climbing the walls to come up with a distraction or a project if you don’t have regular work you can do from home or if you’re one of the folks who has to go out into the real world. It can be a real energy suck.

Maryland psyche doom band Yatra found something constructive in writing and recording their crushing third full-length album “All Is Lost,” their second release of the year, following January’s eye-opening “Blood of the Night.” On fire after time on the road and feeling the creative juices flowing, the band—vocalist/guitarist Dana Helmuth, bassist Maria Geisbert, drummer Sean Lafferty—got together with Noel Mueller of Grimoire to record this nine-track beast, though they point out it was done with strict social distancing in mind. They might sound like savages on record, but these are responsible musicians in the face of a global pandemic, a lesson to us all. The result is yet another uptick in quality for a band that’s been making powerful stuff since their 2019 debut “Death Ritual” and keep finding new ways to be even deadlier.

The title track kicks off the record with guitars firing up and furious growls as Helmuth wails, ” Die before your flesh has turned creeping from the afterlife!” The song feels like a raid before it switches up and the solo catches fire, growls continue to cave in chests, and fierce drumming knocks holes in the walls. “Winter’s Dawning” delivers doom snarls and the drums hammering as the pace hulks along. ” Foretold the silence has taken back the night, starlight is shining, winter is dawning,” Helmuth calls amid a gallop that threatens safety and an animalistic ambiance that ends in a nasty section of mashing. “Tyrant Throne” slowly gets its juices flowing as the riffs spiral, and the low end crushes spines. There is gritty singing over the chorus as the band achieves Sabbathian symmetry, with the soloing melting and the playing leaving your mind racing into oblivion. “One for the Mountain” begins with burly bass and bluesy smoke mesmerizing before cleaner singing takes the lead. “Death is chanting in the wind, the song that makes the blood flow, I can hear the battle call, we shall crush them one and all,” Helmuth declares as vicious slide guitars slice underneath fingernails, and the pace trudges. The final moments send heat waves as signing mix with guttural grunts, and the end gurgles out.

“Blissful Wizard” begins with sitars massaging your mind as a gargantuan bong hit bubbles into clobbering, and the playing cuts toward the center. Growls tear at flesh as the soloing detonates, leaving ash and blood in its wake. “Talons of Eagles” spills in with bustling drums and sturdy riffs, while the growls scrape at the ground. “Serpents of darkness, death in the night, crushing bones and spirits, bloodshed will fall,” Helmuth forecasts as the earth is scorched, and the song leaves nothing but punishment behind. “Eyes of Light” has speedier drums loosening plaster, guitars smoking, and the pace chugging as it chews its way into your consciousness. Growls crumble and seek to leave bruising while the band does its best to unearth any sense of calm buried at your center. “‘Twas the Night” starts with acoustics feeling like they’re blowing in during a breezy night before electrics take over, and the melodies even have a black metal essence to them. The pace is slower and mournful as ice and snow cripple your bones, and long-lost tales find their way into your dreams. “Northern Lights” caps off the record with noise rustling and the drums opening into swampy slide guitar. Growls offer some hope as Helmuth howls, ” I promise you tomorrow the northern lights will lead you home.” There’s a blues-slathered psyche stomp that gets into your bloodstream, while some final punches are landed, and the track soars off, returning to the night sky.

Yatra have put a pretty nice dent in the doom underground in a really short period of time, and “All Is Lost” continues their upward trajectory to being one of the more reliable bands working at this thing. They’re prolific so far, yes, but they’re always dealing high quality stuff, as both of their 2020 records have shown a serious uptick from their promising debut album. This sounds like a record that’s landing at the right time, when the weather is getting colder, and the adventures we get to take mostly will be in our mind, where this record certainly can dwell.

For more on the band, go here: https://www.facebook.com/yatradoom

For more on the label, go here: http://www.grimoirerecords.com/